If you want a healthier version of this recipe — made in a slow cooker — check out my recipe for Healthy Slow Cooker Indian Butter Chicken! 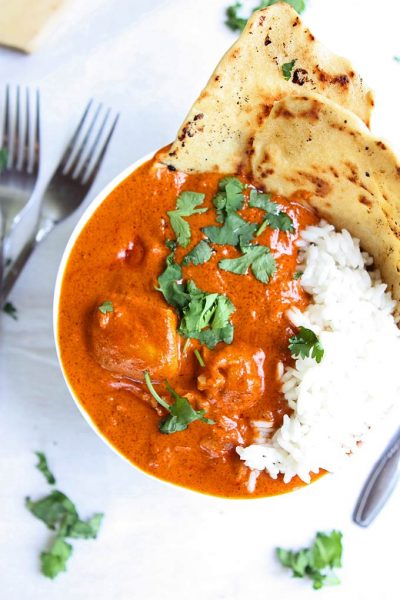 You guys, I am not joking one tiny bit — not even exaggerating — when I say this recipe is a total game-changer. Literally, it has CHANGED MY LIFE! I know I sound dramatic. Get on board! Remember on Tuesday when I said I never thought making Indian food at home was possible? Well… it is. AND OMG IT’S AWESOME. I’m gushing through and through because when I made this last week, Derek and I pretty much ate the entire pan in one sitting because we were so wrapped up in the sauce! And then we were waaaay too full because this is definitely not a 2-person recipe. 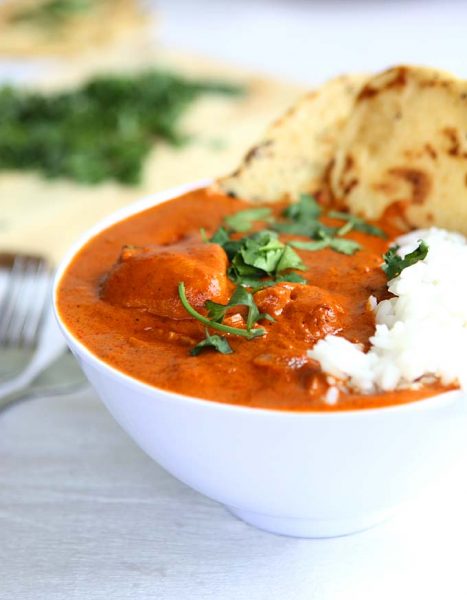 According to the tiny bit of research I did, butter chicken and chicken tikka masala are NOT the same thing. And, in all honestly, this recipe may be more in line with chicken tikka masala for the simple reason that this chicken does not have bones. Butter chicken originated from using leftover dry tandoori chicken and giving it moisture with a creamy spiced tomato sauce — plus some butter, and we have butter chicken. According to Epicurious, chicken tikka masala was born when restaurants saw butter chicken’s popularity, and started cooking boneless chicken specifically for the tikka masala. Have I confused you yet? One thing I have found, is that information everywhere is a bit different. Some say there are deeper differences than that (starting with, and not limited to, the inclusion of butter/ghee in butter chicken), but others call them virtually the same thing. EITHER WAY: I LOVE IT. 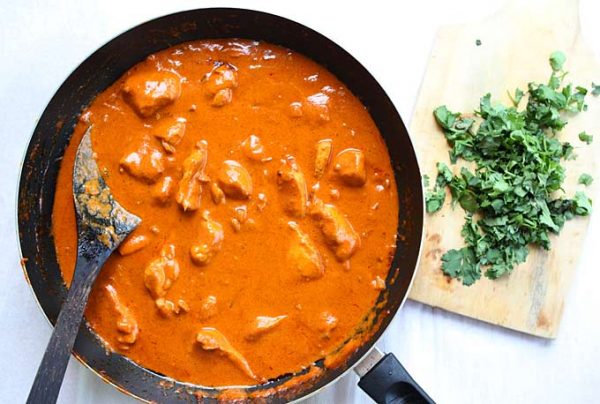 Let me just put out this huge disclaimer and say: I am aware that this recipe is probably not anything like your Indian grandmother’s authentic butter chicken recipe. Hers probably takes way longer, has some ingredients I’ve never dreamed of, and tastes like absolute MAGIC. Mine, doesn’t take quite as long, doesn’t have any crazy ingredients, and pretty much tastes like ABSOLUTE MAGIC. We’re all about accessible recipes here, right? RIGHT! Get to making this. It’s honesty really easy, and you probably have most of the ingredients already.

First off: make your naan! Oooh yes make some naan (edit: this link is a non-yeasted naan recipe, I’ve since added a yeasted naan that’s even better!). You shouldn’t even consider eating this recipe without naan. It’s probably a sin of the highest kind, and you definitely don’t want to go down that road! Next: brown your chicken. Seeing as I have only one skillet over here, I browned my chicken before starting the recipe. I’ve written the recipe as if you’ll do the same, but in reality you could start the sauce and brown the chicken at the same time — if you want to dirty two pans and speed up cooking time. Do whateva! Once the chicken is browned, you’ll throw together the sauce, let it simmer away for a while, add the chicken and then try not to drool in the pan too much. Also, don’t burn your tongue trying the sauce very three seconds (I may or may not be speaking from experience). 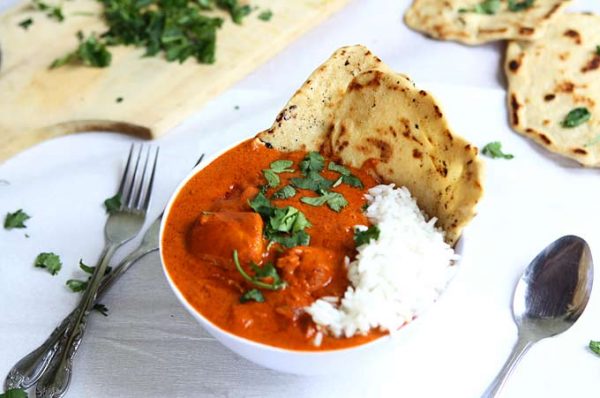 Pleeaaaase let me know if you try this out, especially if you’ve never cooked Indian food before! I want someone to commiserate with: WHY DID WE NOT TRY THIS BEFORE!?!? Enjoy!

*I used 1 cup HEAVY cream, and 1 cup water. You could use table cream, or sub 1 cup for milk (but be careful for curdling if you lessen the fat content!).
**** There have been MANY questions about tomato sauce. If you aren’t in the USA, you probably call it something else (maybe passata?). This is not ketchup. I used something very very similar to this product.