Notice: Function add_theme_support( 'html5' ) was called incorrectly. You need to pass an array of types. Please see Debugging in WordPress for more information. (This message was added in version 3.6.1.) in /var/www/wp-includes/functions.php on line 5831 3 Weeks until the Napa Valley Marathon - The Kitchen Paper

Writing that title made me super nervous. Three weeks? YIKES.

Luckily, I got my groove back this week. After a hellish week last week, we cut my mileage down this week, which worked well. I’m pretty sure we could have kept the extra miles and been fine, but I was glad for the easier week anyways. I’m getting pretty burnt out on running, and motivation has been an issue this week!

This week was fairly warm here in Bozeman, so the first and last miles of my runs (before I make it out of town and onto dry roads) involved a lot of skating, hopping, dodging puddles, running up onto snowy berms to avoid icy patches — it was an exercise in freestyle walking if I’ve ever seen one! I’ve also been trying to figure out how to make my feet happy, which included some mis-matched (11 and 11.5) shoes this week. I think I’ll end up doing the race in the 11.5’s, but I’ll take both pairs just in case. 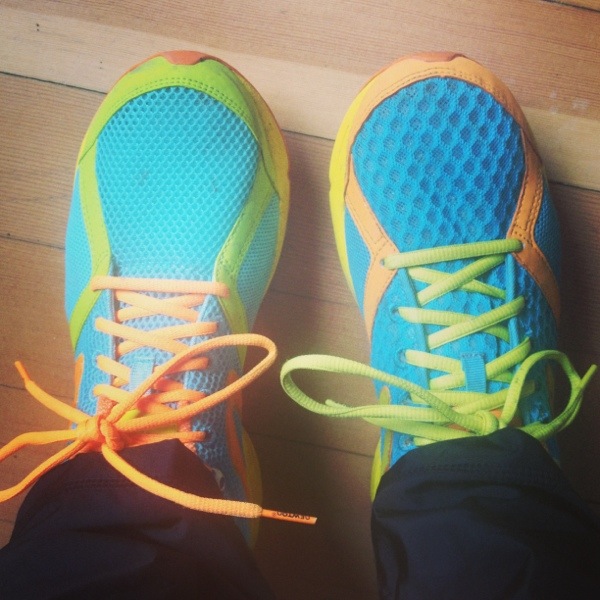 The hardest workout this week was my long run, which we decided to make in a 15-miler including 10 miles at race-pace, rather than another 20 miler. In the middle of the week, after two good runs, I asked Derek if he thought I should do another 20 miler since I was feeling good — to which he reminded me I have a really solid aerobic base, and we consciously cut down mileage this week to ease up on my body. He had good points, but I still kind of wanted to get another 20 in. Instead, I stuck to the (new) plan and did 15 — first 5 easy (averaging just under 9-min miles), then picked it up to try to run as close to race pace as possible. As Derek reminded me, I’ve proven I can run faster than race pace, and slower than race pace, but can I run AT race pace? I set out to prove I could.

Erring on the side of too-fast, I averaged 8:04 for the last 10 miles — close enough for me! Oddly, the run felt pretty hard for the first 5 miles, then got much easier when I sped up. Despite the first mile of “fast” being uphill (you can see I gave myself a little leeway there). One thing that really helped was trying a new technique for running hills: imagining leading from the BACK of my knees. That, and keeping my hips forward (which I usually do anyways). Something about the visual of the backs of my knees pushing up the hill really helped my pace — which usually dips significantly on hills.

I spent a lot of this week getting nervous about the hills on the course, because I know they are my weakness. The course is described as “rolling hills for the first 6 miles” and flat-ish thereafter, but there appear to still be some decent hills (like all of mile 16…). This week proved to me that I might be able to suck it up and push through them, rather than having to rely on making up time on the downhills, which is doable but also tiring.

This week is an honest start to decreasing mileage, pre-prescribed, not just altered for my tired legs. In these last few weeks I am going to be focusing more on speed, and race pace. I need to get comfortable at 8:10! I know I’m comfortable at 8:00, and 7:50, but I want to be able to recognize 8:10 and keep myself going there.

I’ll check in next week with my TWO WEEKS UNTIL NAPA (AAAH) post! I’m pretty sure you’ll be hearing about how nervous I am!