Notice: Function add_theme_support( 'html5' ) was called incorrectly. You need to pass an array of types. Please see Debugging in WordPress for more information. (This message was added in version 3.6.1.) in /var/www/wp-includes/functions.php on line 5831 Classic Cinnamon Rolls with Cream Cheese Frosting - The Kitchen Paper 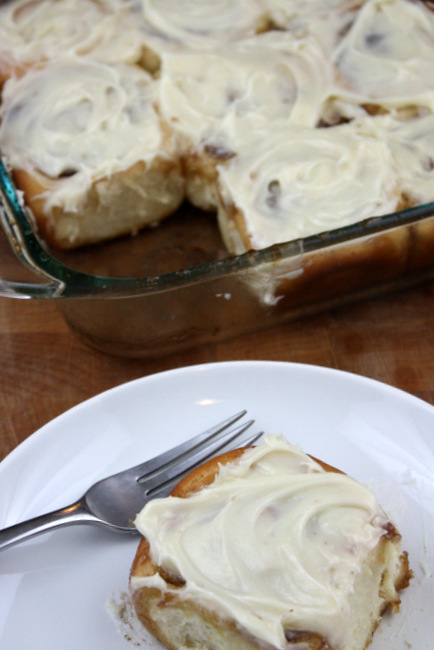 Thursday? Already? This week is flying by. Maybe the holiday on Monday did it, but I’m in shock that my rest week is almost over! I’m having WAY to much fun relaxing, and probably overdoing the “rest” part of rest week. Um… oh well! 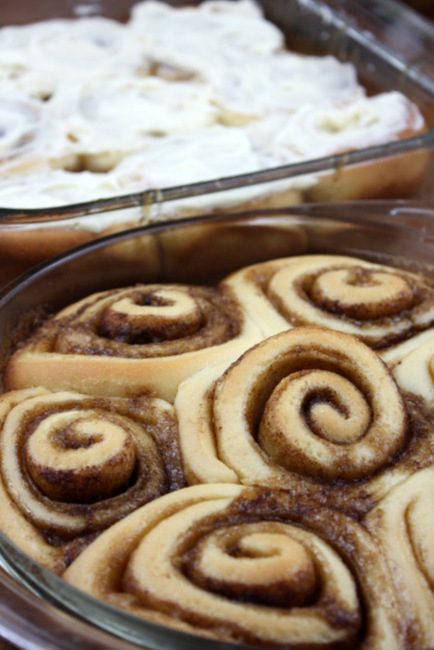 I’m writing to you now with, I’m sure, a ridiculously high level of sugar in my system. Why? Oh, no reason… other than these freaking cinnamon rolls! I CANNOT stop eating them! They’re here, I’m hungry (well no, actually, not really), and they taste SO. DARN. GOOD. 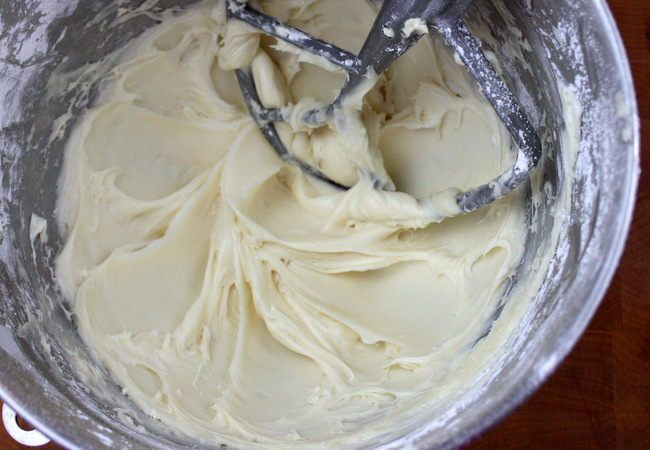 I’ll admit that this is my first time successfully making cinnamon rolls. Seriously. I’ve made them a few times before, but never been impressed with the results, or felt that they were worth posting here. UNTIL NOW! This dough was very easy to work with, made beautiful rolls, and you absolutely cannot go wrong with cream cheese frosting. In fact, it’s a necessity for cinnamon rolls, in my opinion. I made double what the original recipe called for, and barely had any leftover. 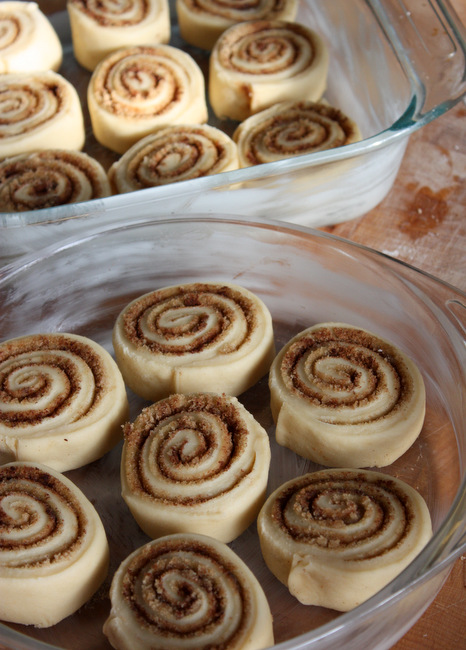 Like anything yeasty, these rolls take some patience. Let them rise, then fill them with sugar, and let the rise again. 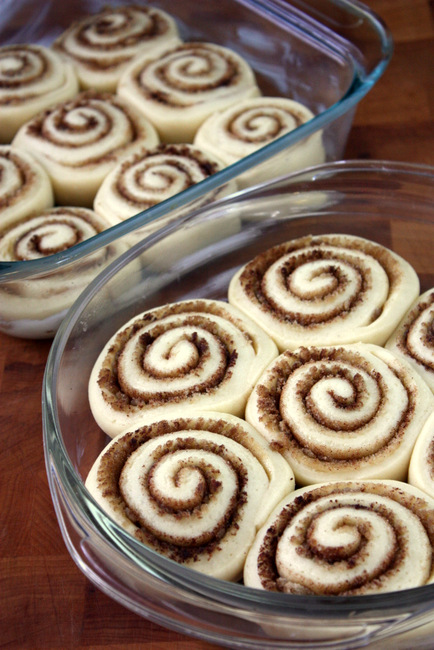 A handy trick for cutting cinnamon rolls? FLOSS. Really — it prevents any squishing of the rolls, avoiding lopsided results. Just slide the floss under the ready-to-cut log, cross over the top, and pull! 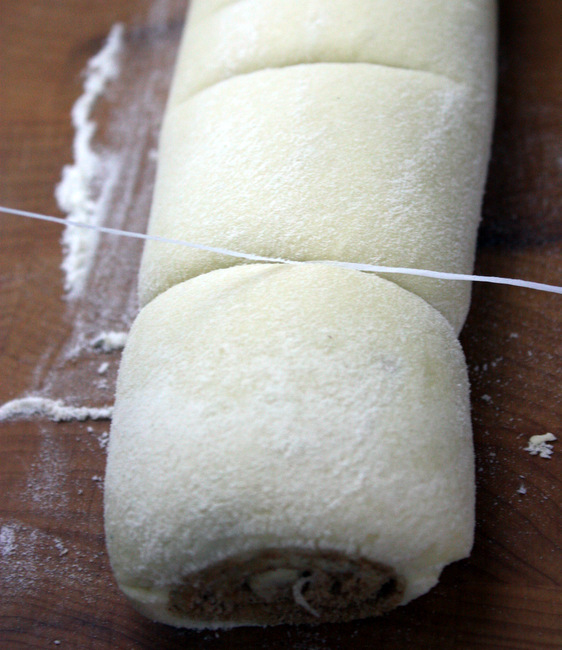 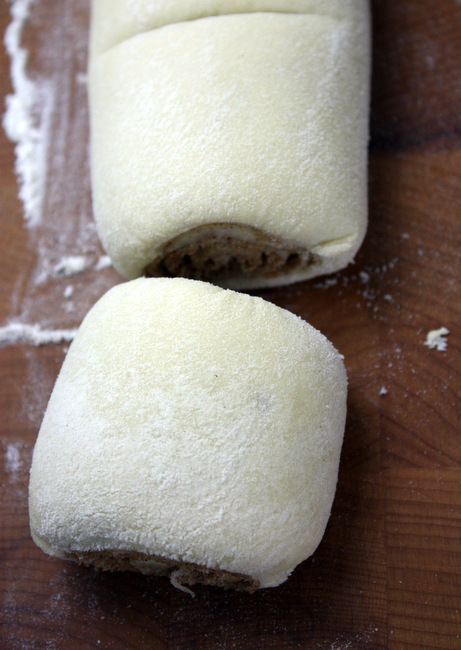 These are AWESOME fresh and warm, but 6 seconds in the microwave does wonders to any you manage to save for later! 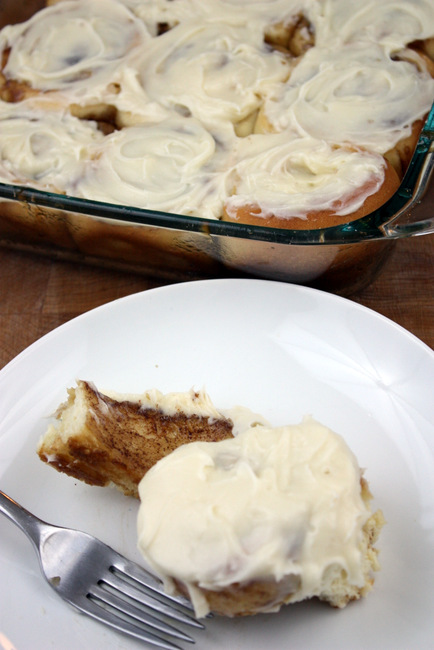 Heat the milk and 3 Tbsp butter together in the microwave (or stovetop) until the butter is melted. Let cool to 115F before adding the yeast, and letting proof for 5 minutes. When foamy, add to a stand mixer bowl with 1 cup flour, sugar, egg, and salt. Mix for 3 minutes, scrape down the sides of the bowl, then add an extra 2 cups of flour — and more as necessary to keep the dough from sticking to the sides of the bowl. When the dough has come together, turn out onto a lightly floured surface and knead by hand for about 5 minutes — until the dough is very smooth and not sticky (add flour as necessary, but try to add as little as possible).

Place the dough into an oiled bowl, cover with plastic wrap and a kitchen towel, and let rise until doubled in size: about 2 hours.

When the dough has doubled in size, turn it out onto a lightly floured surface, and roll out into a 11″x18″ rectangle. If it is pulling back too much, let it rest for five minutes before trying again. Pour the melted 5 Tbsp butter over the rectangle of dough, and spread it over the surface — leaving 1 cm around the edges without butter. Spread the brown sugar and cinnamon evenly over the buttered area, and gently press into the dough. Roll the dough tightly, from the longer side, into a log. Pinch the seam closed.

Mark the log at 1″ intervals, and then cut the rolls. Place the rolls into your dish, evenly spaced with about 2 cm between each other. Cover, and let rise for about 45 minutes.

Preheat the oven to 400F, and when the rolls are ready, bake for 20 minutes. The tops should be turning brown, but just barely so. Remove from the oven and, after 30 seconds, invert onto a rack. Let the rolls cool for 10 minutes inverted, then turn them back over to right-side-up.

While the rolls are cooling, make the cream cheese frosting. In a stand mixer, combine cream cheese and butter, and beat until very smooth — scraping down the sides as necessary. Sift the powdered sugar into the mixture, then add the vanilla, and mix until smooth.

When the rolls have cooled significantly, liberally spread the frosting over the rolls.