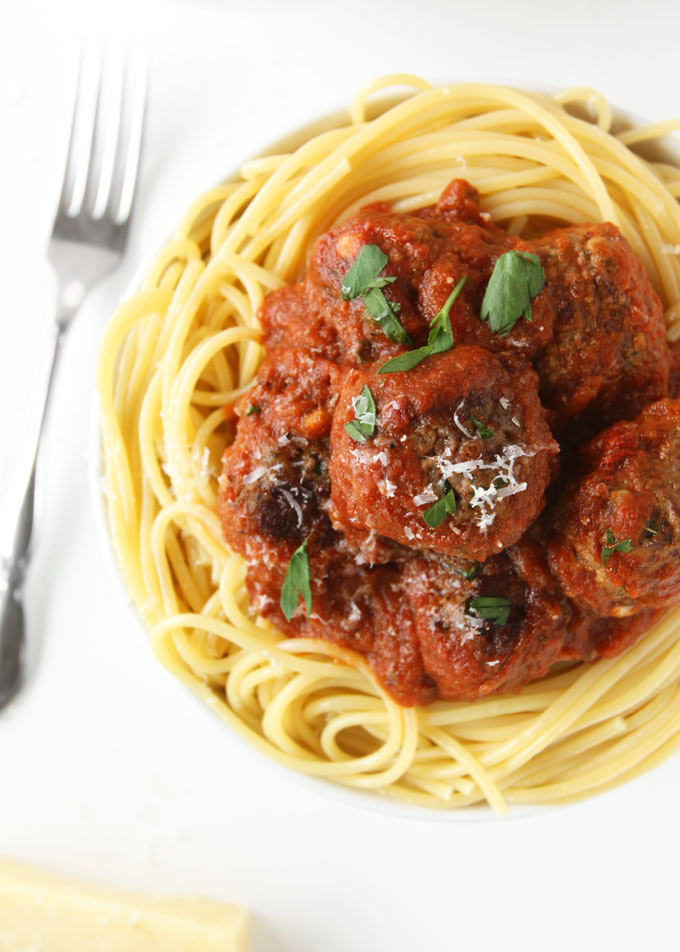 Buckle your seat belts, kids: we're taking this post alllll over the place. Mostly: I'm gonna tie a real-life experience to horror movies to blood spatter to MEATBALLS. Stay with me.

Last week, I legitimately thought I'd walked into a stereotypical horror movie scenario: CAT EDITION. First, watch this cat video. So ridiculous. Get's me EVERY TIME. My scenario was almost nothing like that, but ... you know. TO THE POINT: I was coming home from hanging out with friends, sometime after 10pm. I walked up the stairs (I'm on the second floor, so never take the elevator) and opened the door to the hallway. If nobody has been in the hallway for a while, the lights turn off, so it's pretty dim. Then, when you move into the hallway they turn on after a few seconds. It's a pretty nice feature, but at this particular moment: the darkness added to the creepiness. 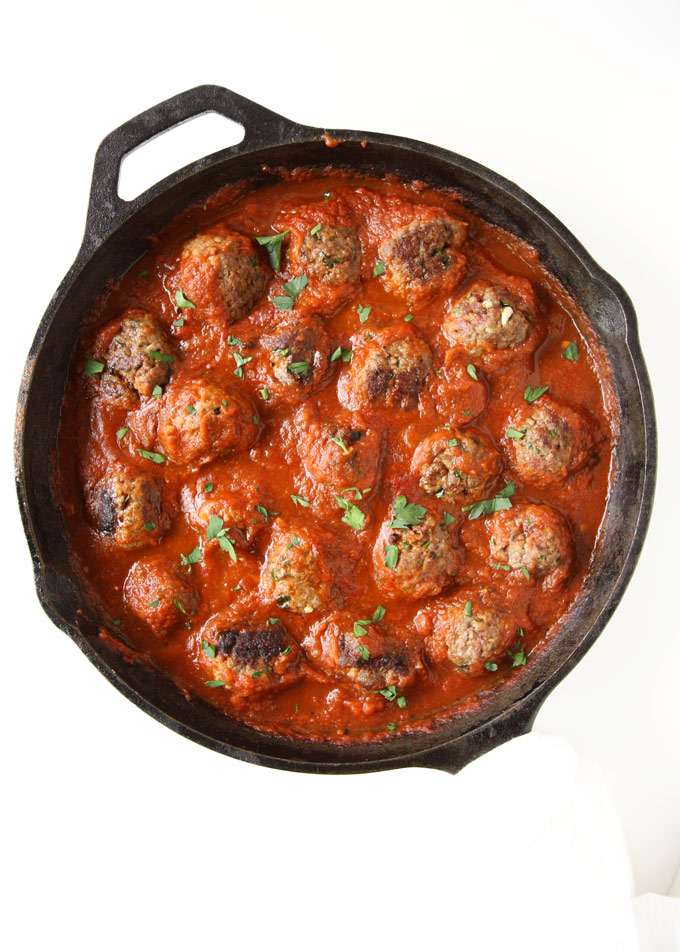 So, I open the door into the dark hallway and all I hear is really dramatic, ominous music. I still haven't placed it, but the first things to come to mind were either something from Dexter (but their music is actually kind of lighthearted) or House of Cards (I legitimately just wrote "House of Carbs" ... wow.), neither of which actually fit the bill. Whatever it was, it was eery. THEN I SEE IT: THE CAT. 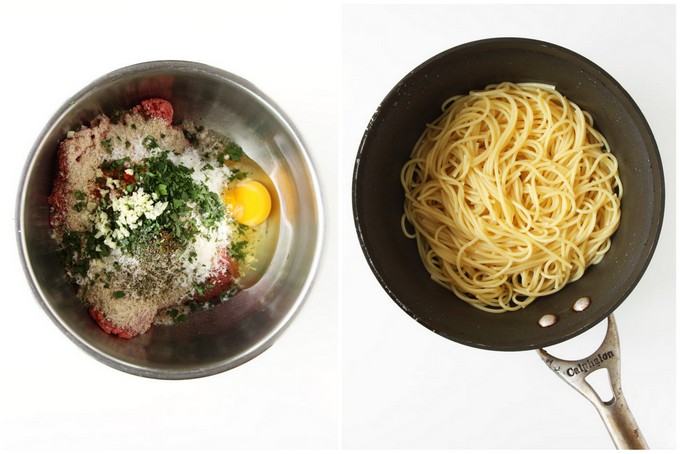 All I see is a cat, sitting at the end of the hallway with it's body halfway behind the wall, but both eyes lazar-focused on me. OMG. You know how cat eyes glow!? It was like some creepy robot kitty there to kill me with it's gaze! Combined with the music, I seriously questioned my sanity and/or life choices as my life flashed before my eyes. Death by kitty. Please, please no!

It turns out all of this was easily explained by the shoe propping my neighbors door open — letting the cat out to roam, and the (weirdly loud) music to drift into the hallway. I guess I shouldn't really make any assumptions, though, since I haven't seen anyone come in/out of their apt since "THE INCIDENT." This is what happens when I live alone and have a ridiculously vivid imagination. DEATH BY KITTY. And house of carbs. 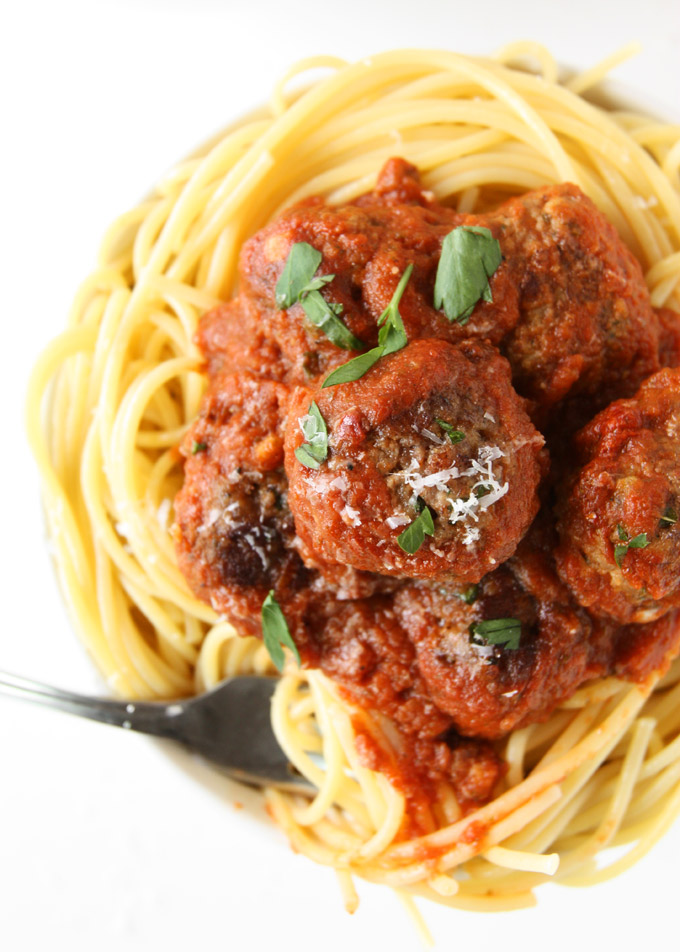 So, going from horror story, which inevitably has some blood spatter, we'll come to tomato splatter which brings us to meatballs. These meatballs live in a house of carbs! {I just googled "house of carbs" and LOOK WHAT I FOUND! IT'S PERFECT!} But seriously: these meatballs are SO DARN AWESOME. Italian food is something I know almost nothing about — except that I love shoving it into my mouth. I'm no expert on different sauces and tomato mixtures, and have little-to-no experience cooking it: but I'm hoping to change that. 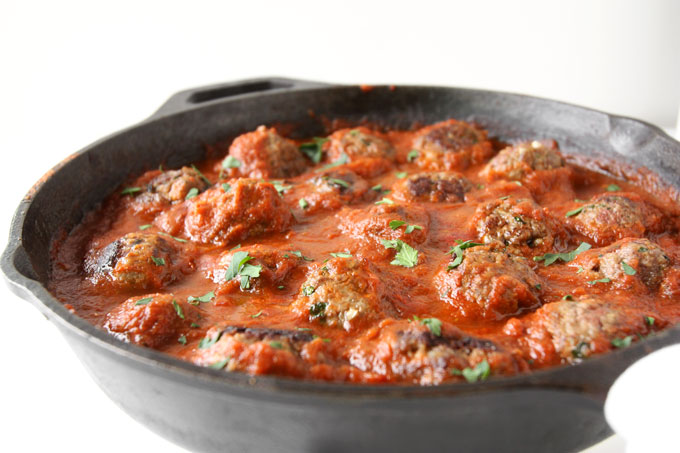 I had dinner at a friend's house a few years ago and she made the BEST cannelloni. It was homemade from a book she'd received as a wedding gift, and I have been obsessed with it ever since. This recipe has absolutely nothing to do with that — I don't have the book, nor is this a cannelloni recipe, but I have had a hankering to learn more about authentic Italian cooking ever since. So, here's my start!

I wanted to keep the meat somewhat simple, so I did an all-beef meatball. You could certainly do a mixture with your other favorite ground meat! I chopped up my herbs, grated cheese, and gently mixed it all together with my hands. Then I formed my meatballs, and browned them in a super hot skillet — removing them when the outsides were browned (or slightly blackened!). Then I made the sauce: Tomatoes, basil, salt, garlic, all blended up to a smooth sauce. Using the same pan where I'd browned the meet, I lowered the temperature and added the sauce — scraping the cooked bits off to join the sauce for flavor. After about 10 minutes of simmering the sauce, I adde the meatballs back in to finish. I let them cook in the sauce for about 15 minutes so the sauce would be done, meatballs fully cooked, and everything TAAASTY! 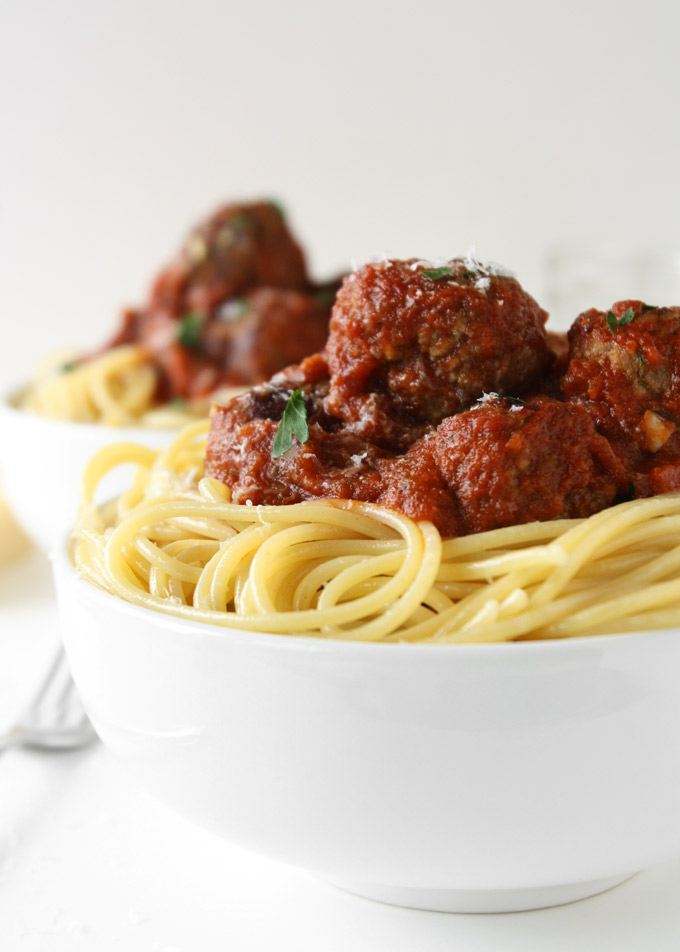 If you're short on time and don't want to make your own sauce, you can just pour the sauce into the pan when the meatballs are browned and cook until everything is warmed through (and meatballs are done, clearly). That said, this sauce was so simple and really actually delicious! I ate it for breakfast. Not gonna lie.