Notice: Function add_theme_support( 'html5' ) was called incorrectly. You need to pass an array of types. Please see Debugging in WordPress for more information. (This message was added in version 3.6.1.) in /var/www/wp-includes/functions.php on line 5831 Getting in Shape is HARD Recipe

Wow, please remind me never to get out of shape EVER AGAIN.

I wrote the following paragraph two weeks ago, after one week of running:

Seriously, this last week has been really demoralizing: running is much harder than I remember. I’m having a really hard time believing that I ran 7:59 pace for over 26 miles, just two months ago. I can barely run THREE miles at a 9:00 pace right now! {And this is really depressing to admit}.

There’s a lot more where that came from! I wrote an entire post about how awful I was feeling on my runs, how depressing it is to not perform as you know you (once) could, etc. Probably a good thing not to publish — it was whiney. I had [many] failed workouts, skipped workouts, slow workouts, and just plain HARD runs. I’d come back and Derek would ask how it went, to which I’d always reply, “AWFUL.” And I meant it. I really felt awful. That training plan I laid out? Totally thrown out the window. 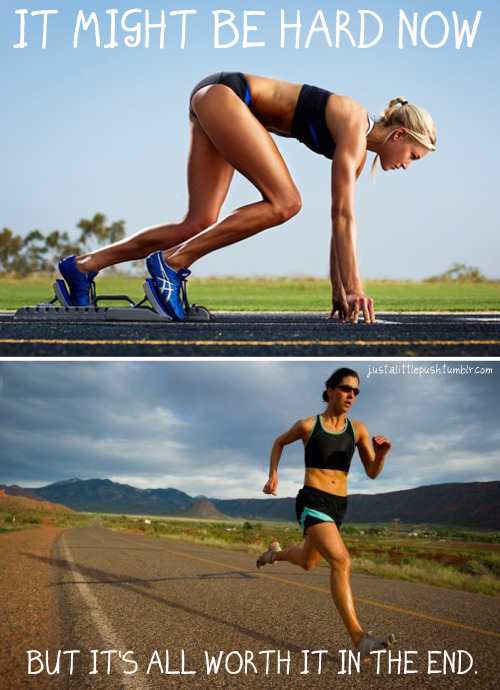 Onto the good stuff: I’M BACK! I hope. I finally had a successful run yesterday, surpassing all of my expectations and hopefully signifying a return of my fitness. After a week of running without my GPS watch {gasp!}, I went out for a 10-miler with the watch, having made the decision not to look at it for pace, and only look at it for mileage. I set out at what felt like a “long run” pace (slowish), and didn’t check my pace until I hit 5 miles. Surprisingly, I was maintaining a 9-min pace — on a route where I sometimes struggled to do that during marathon training. Hmm. Curious.

At that point, the rest of my run was slightly downhill, so I decided to let myself push it a bit — still not obsessing over pace, but looking at each mile split as G beeped at me. 7:58, 7:45, 7:32, 7:28, 7:18. Not a bad finish to the run! Faster than I’d expected to finish a run like that! My average for the run was 8:20, and that alone boosted my confidence like WHOA. I think I’m past the hard part, and can start running with the watch again.

While the first three weeks were really hard and demoralizing, I’ve now learned that you really can just push through and make a comeback! I realize I made it harder on myself by only running hilly trails, but I think that has helped me gain my strength back faster than I would running flat roads. It also makes it easier to push myself when I am running flatter routes — NOTHING is as bad as running up the backside of Pete’s Hill. Nothing. I’ve also been doing more cross-training, as promised. Cycling 2x (one long, one shorter) per week, and doing a bit of yoga. Gotta get strong!

What I’ve learned is that signing up for a race is not necessarily a motivator for me — there are plenty of workouts I’ve skipped in the last few weeks. The motivator, as I’ve always suspected, is seeing the numbers get better and better. I didn’t NEED to push it on the way back yesterday, but I loved seeing the mile times get smaller and smaller, knowing I still had enough to keep pushing. THAT is what makes me want to keep going. Knowing that last week I ran the same route 30 seconds slower. That my mile-repeats are getting faster. Running without the watch was helpful simply to keep me from being discouraged by poor numbers, but now that I assume I’ll see them getting better, the watch is essential for my motivation. Bring on the numbers!

I’m confident I can get back into shape for the Missoula Half (July 14, I think), and PR pretty substantially, but for the Jackson Half I’m still not entirely convinced. I may need to just run for the sake of running. I AM AWFUL AT THIS. I’m definitely the kind of person that would rather quit than fail (oops), and not PRing would feel a bit like a fail to me. Thinking about it logically, I feel like there is no way NOT to PR: I only need to run 9 seconds faster (per mile) than I did for the ENTIRE MARATHON. That should be ridiculously easy, right? Yeah, I feel like it should be. Hopefully I can keep running like I did yesterday!