Many of you have been asking for garden updates, and I keep meaning to do it and then getting SO excited that things are growing and changing that I haven't felt like I could make one that was up to date! Oh well, here I am biting the bullet for you as I realize that these plants will continue to grow all summer... awesome! I'm still feeling like a super-dork for loving my plants like babies, but it really is gratifying to see things flourish when I know they started out as mere seeds! I'll admit that sometimes I shun the few plants I bought already started from the nursery — I'm not feeling nearly as attached to them since it feels like I took a shortcut! I mean, if you did as much research as I did into topics like commercial hydroponics and read guides on how to look after plants, then taking care of them is something you would priorities. Plus, growing them from scratch and looking after them is an achievement in itself.

Nevertheless, I will be excited when my nursery-bought tomato plants, strawberries, and jalapeños start producing! 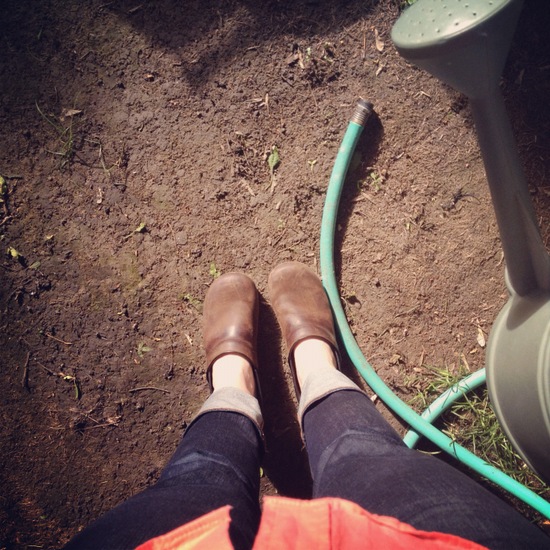 Everything has been in the greenhouse up until recently. I moved the peas outside a few weeks ago, but everything else has been waiting for us to build some raised beds. The weather has been warm here (75 F), so I've been leaving the top half of the door open on the greenhouse to keep the temperature down, and to let the bees in. It really is amazing to see the greenhouse coming along so nicely. Hopefully, this may inspire you to think about using something like Cultivar greenhouses yourself for your own gardening efforts. We finally built the raised beds almost two weeks ago now, but have been trying to find time to get soil! We're too busy! Yesterday we finally tried, and discovered our vehicular situation isn't adequate for the amount of dirt we need, so we're having two yards of soil/compost mix delivered tomorrow. Then we'll get to planting!

I'm worried that they are too much in the shade, as the leaves on the trees around our house are now blocking a lot of sunlight. Oh well — hopefully some things make it through!

Here is the FULL rundown — you asked, and you shall receive! Excuse the over-exposed photos, I have little patience doing anything with the plants besides actually taking care of them!

I hope I haven't forgotten anything (anyone?) — I'll try to do updates on the garden each month this summer! When we went to get dirt yesterday, we picked up a lot more seed packets (vegetables and some flowers this time, too!), so we'll be planting a lot more in the next week or so. You'll definitely be seeing more recipes with fresh food from the garden, and perhaps pictures will sneak into those posts too!