Notice: Function add_theme_support( 'html5' ) was called incorrectly. You need to pass an array of types. Please see Debugging in WordPress for more information. (This message was added in version 3.6.1.) in /var/www/wp-includes/functions.php on line 5831 Maple Nut Ice Cream {Guest Post!} Recipe

Today we have a guest post from my Aunt Mary! I grew up eating her fabulous creations during family gatherings, and still consult her regularly for baking advice and recipe suggestions. Aunt Mary, along with the rest of the family, is an expert on ice cream: I have no doubt this recipe is delicious! I guess I’ll have to go get myself an ice cream maker now… Woohoo! A big “thank you” to Aunt Mary for the contribution — it’s been a busy few weeks and I am honored to have her as my first EVER guest post. 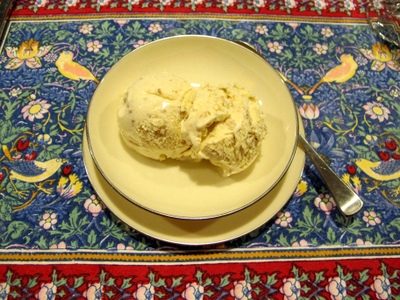 Aunt Mary says:
When I was a kid, it was a summertime treat to stop by my parents’ store and talk my dad into taking time from his busy day to treat us to nickel ice cream cones from the soda fountain at the Grants Pass Pharmacy. It was a block down 6th Street from our store. We’d walk, and Dad would help get us kids positioned on the tall stools at the soda bar. Then we’d solemnly order our cones. For some reason, I always ordered maple nut. Maybe it was a flavor that my mom didn’t buy when ice cream went on sale at the grocery store. She always bought it on sale, because we ate A LOT of ice cream in the summer.

As we grew older, Dad would give us the money for the cones. We’d walk down to the pharmacy, promising to cross the street only on the “walk” light, order our cones and one for him, and then lick ours all the way back to our store, trying to get there fast enough so that his cone didn’t melt in the hot summer sun and slow enough so that our ice cream didn’t fall off the cone.

Finally, we were old enough to go to the pharmacy and sit on the stools by ourselves. We also became more sophisticated. Dad gave us enough money for milk shakes or sodas. The pharmacy made real chocolate sodas with soda water, not 7-Up, and if you wanted they’d use chocolate ice cream instead of vanilla. I was in soda heaven. For a while phosphates were popular and I drank them, but I don’t know why. They always felt like they left lead in my stomach. The soda jerks also made cherry Cokes, with Coca Cola and cherry syrup. That was before I quit drinking Coke.

The Grants Pass Pharmacy was very, very old. I think it was in business when my dad was a kid. He probably went to the soda fountain with his friends after school. Our store was started by his parents and he went there after school, so it only seems logical that his dad, my grandfather, might have taken him to the soda fountain at the pharmacy for afternoon snacks. I bet they sold penny cones in those days!

Fast forward quite a few years. Last fall, Graham and I went to a neighborhood picnic. Lisa and her son Matthew brought ice cream and it was delicious — plain vanilla, but some of the best I had ever had. They told me that they used the KitchenAid ice cream maker attachment. I was sold and soon thereafter bought one from Amazon, $20 less than the list price. I was in business, except for one problem: eggs.

Every decent ice cream recipe calls for eggs, and most of them call for lots of egg yolks. My Depression Era mother taught me, “Waste not, want not,” so I couldn’t just throw the egg whites away, but Graham doesn’t like angel food cake. I could see the future with my freezer overflowing with frozen egg whites. Besides, all those eggs were going to make the ice cream pretty expensive. What to do? I searched the web and discovered the Ben & Jerry’s Homemade Ice Cream & Dessert Book calls for whole eggs. That’s a good start, but their recipes use raw whole eggs and many of my friends would object to that.

Time to start adapting. Make a custard. Except for very special occasions, don’t use as much whipping cream. This not only cuts costs, but it cuts fat calories, as if you care when you’re an ice cream connoisseur. So, my “ideal” recipe for everyday ice cream contains 1 cup whipping cream (try for organic that has no additives), 2 cups half and half (again, organic, no additives), and ½-¾ cup sugar, depending on what you’ll be using for flavoring. You could use whole milk instead of half and half. For company, use 2 cups whipping cream and 1 cup milk or half and half.