Notice: Function add_theme_support( 'html5' ) was called incorrectly. You need to pass an array of types. Please see Debugging in WordPress for more information. (This message was added in version 3.6.1.) in /var/www/wp-includes/functions.php on line 5831 Race Report: Jackson Hole Half Marathon Recipe

I’d really rather not write this race report, as I have nothing great to report; however, I feel obligated. So, here we go:

To say this race was not my best would be an understatement. Not only did I come into it underprepared and unmotivated, but it also seemed to coincide with my body not wanting to work it’s best in the given situation. In March, I was lucky enough for my marathon to have everything perfectly in place — I was well fed, well rested, digesting properly, stretched/rolled, and generally feeling great. This time, not so much.

I’m sure every runner, and any athlete for that matter, has had a race where things just didn’t line up. This was my race. We drove from Bozeman to Jackson through Yellowstone National Park and Teton National Park on Friday, stopping along the way to see sights and goof around. I didn’t think I was overdoing it, but the extra time on my feet probably didn’t help. I should mention that I did my typical pre-race run of 2×3 minutes at race pace(ish) Friday morning; however, this was probably a terrible idea. I haven’t been doing any speedwork (at all), so even this little effort really tired me out. It certainly didn’t help that my digestive system was NOT happy all day Friday. 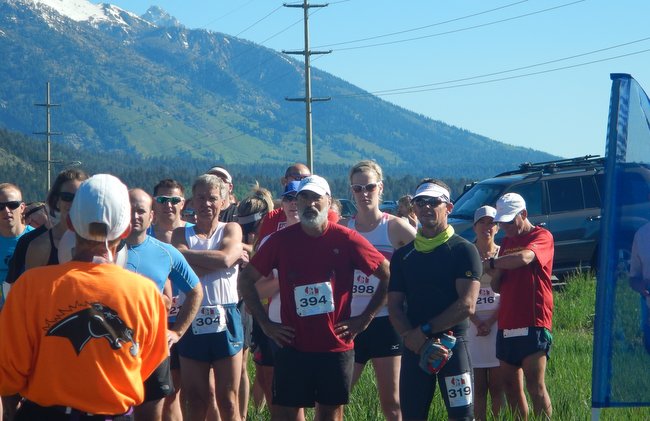 We got to Jackson in time to have dinner, go to a comedy show, and make it into bed by 11:30. Luckily, the race was at 9 so I didn’t need to get up at 4 am. Unfortunately, I hadn’t slept that much (5 or 6 hours) the night before, which is (in my opinion) the most important night for sleep before a race. I slept decently until 6:30, when I got up to eat my pre-race breakfast. That’s when I knew things were really off.

I got out of bed at 6:30 and immediately though “WHOA my legs are BURNING!” Like, more than ever. That’s not a good sign. I scarfed down some breakfast, went back to bed for an hour, then got up and ready to run down to the start. I thought the start was about a half a mile from Kelsey’s house, where we were staying; however, it was actually more like 1.5 or more. Oops. That made for a longer-than-intended warm up, probably too quick as I was nervous I’d miss the start. 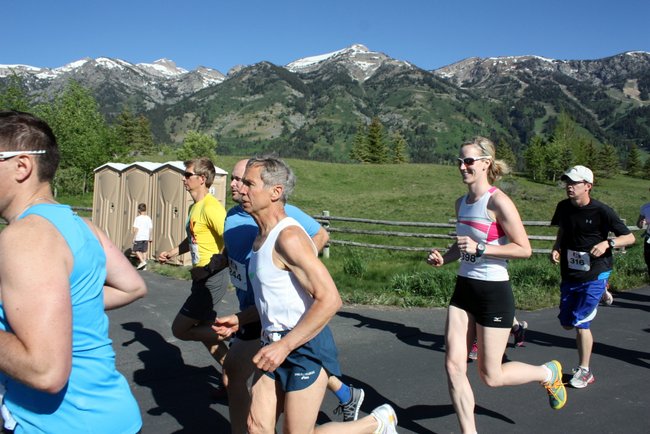 Looking at the results from last year, if I could perform the same way I did for my 10 mile TT in January, I would have finished in second place. I was psyched about that, but knew I was a long way from the shape I was in 6 months ago. Still, I wanted to try. Derek and I have talked a lot about how comfortable I was during the marathon in March. I wasn’t, until the last mile or maybe two, uncomfortable at all. Aren’t you supposed to push yourself during a race, to the point of discomfort? I think so. It’s something I haven’t quite figured out yet: I’d rather not be uncomfortable, and have thus far been pleased with my results anyways.

My plan was to start at an 8-minute pace, then slowly get faster as I felt I could. My first few miles were all 7:40-7:55, which was probably too fast. I knew, though, that it wasn’t just pace throwing me off. I could feel my legs burning at mile 2, and by mile 4 (when Derek came to meet me with gatorade and a gel) I was seriously contemplating quitting. Here’s Derek trying to convince me to keep going, and shortly after this picture I stopped running for a good 30 seconds while he convinced me to keep going. 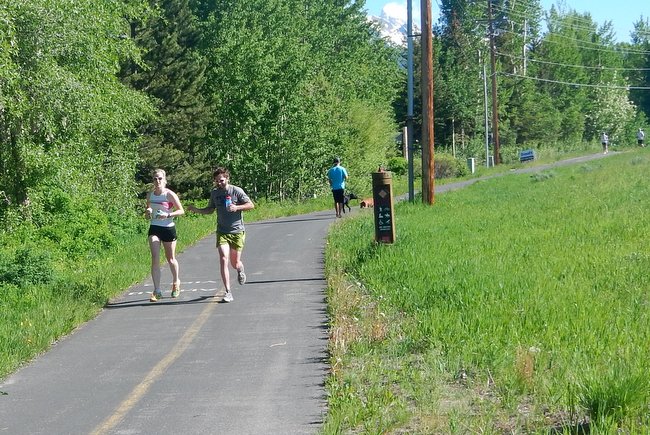 Feeling like quitting at mile 4 is NOT a good sign in 13.1 mile race. I thought about slowing my pace, but knew that my legs were so far off of normal (THE BURNING!) it’d be ridiculous to slow that much. I pushed the next two miles as much as I could, but honestly was fighting back tears and serious disappointment, so I called it quits at mile 6. I was just flat out not having fun. And really, what is the point of running if you aren’t enjoying it?

I made my way over to Kelsey and Derek, explaining that it just wasn’t going to happen that day. Derek tried to convince me to keep going, that I could do it and just “wasn’t warmed up” (after 6 miles? + almost 2 of warming up? I don’t think so). I knew I wasn’t just being a weanie, so I stuck by my decision to not push myself to tears for the next 7 miles. It just would not have been enjoyable. 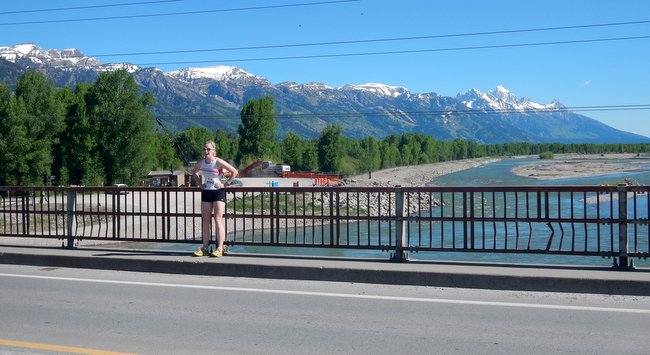 Luckily, my friends Heidi and Orion were also running. Really, Heidi was the reason I signed up in the first place. It was her first EVER running race, and I was honestly really excited about that! I decided to wait for them at mile 6 and then hop in and finish with them. I figured finishing was better than not finishing, but cheering Heidi on and experiencing someone else’s first race would be WAY more fun. Look at them — CLEARLY enjoying life, not wanting to die with each step. I had a lot more fun running with them! Finishing with them turned my failed race into a successful training run (and I’m not at all sore! Woohoo!). 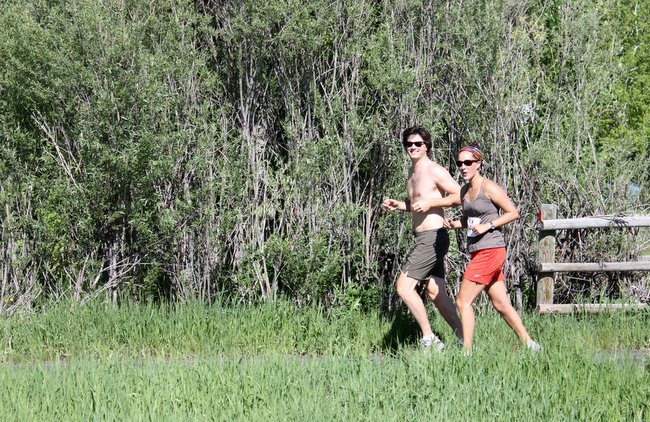 I don’t consider myself a quitter. Even if that is running through YOUR head, it isn’t running through mine. I made a very conscious decision to stop chasing a certain pace (or place), and I’m really glad I did. The variety of factors leading to my dead legs and resistant body that morning were probably mostly my own fault, but it doesn’t change the fact that my legs were NOT ready to run. I’ve never had legs burn that much (upon waking!). Honestly, my legs feel better today (Sunday) than they did yesterday. Oops.

What did I learn? First, running 2-3x per week is not really “training” nor is it going to get you in shape very fast. Duh. Second, I need to do speedwork regularly. I really am a firm believer! Third, I need to take better care of myself before a race. Even in Napa, with the excursions and activities the days prior to the marathon, I was rested, stretched, hydrated, well-fed, etc. I can’t say the same about this last week. 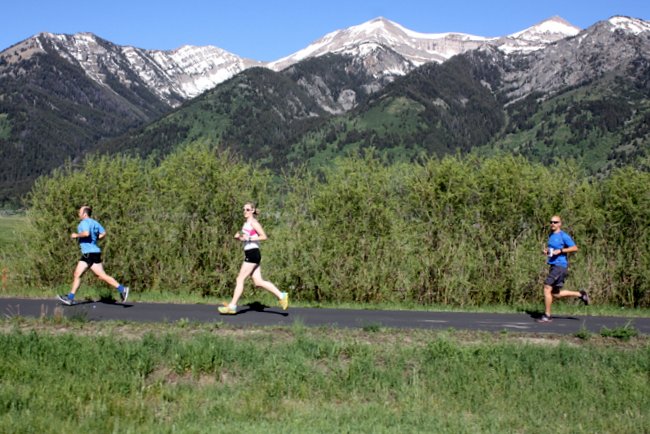 Trying to find my legs around mile 2. I never did. [Photo credit: Derek Loudermilk]

The rest of the weekend was fabulous! One of my good friends from growing up, Kelsey, moved to Jackson a few months ago from Portland. It’s great having her (and a place to stay!) only 4 hours away! The more we go to Jackson, the more I like it. There are so many things to do, trails to hike, lakes to swim in (or paddleboard on), restaurants to try — I could spend a lot of time (and money!) in Jackson.

I have been trying to sort out my feelings about this race, and having a pretty difficult time gaining any clarity. I’m mostly just disappointed, and somewhat embarrassed. And bothered that this time will go on my athlinks profile and ruin my average! I wish there was an option to star/exclude/explain poor performances, but I suppose you could do that with any race slower than your best. That doesn’t exactly seem honest. So, even though I know my time included 30 minutes of standing, and 7 miles of cheer-running, it’s my time and I’m sticking with it!

I plan to forget about this race ASAP (although not the lessons learned), so let’s look to the future! I was selected for the 2013 Bridger Ridge Run, which is 20 miles up and along the Bridger Mountains here in Bozeman. It’s rocky, steep (up and down), people get lost regularly, and just generally a HARD hard run. I’m excited about it, but know I have a LOT OF WORK to do! I plan to run up any steep hill I can find for the next two months. Perhaps the best thing about this run is that I don’t have a PR, or a time to beat, or really any sort of basis for my time. I’d like to break 5 hours, and their predictor says I should be able to; however, mountainous trail races are an entirely different beast and I’ll just be happy to feel great running, and finish. After that, perhaps a fall marathon, but I’m honestly not feeling that psyched about it right now. I’ll keep you updated!