This race was, in a nutshell, weird for me. I went into it feeling like I could either run a 3:20 or a 3:45 — and not at all sure where in that range I would fall. After a frustrating training cycle, with disappointing long runs, I really didn’t know what to expect. That, combined with two disappointing races (Jackson Half + the Ridge Run), I was half expecting to have another terrible experience with all of my muscles burning enough to make me quit. With the exception of a little mishap at mile 14 (read on), and a consequent slowing of my pace, I was feeling awesome! I think I SHOULD have run a 3:24! 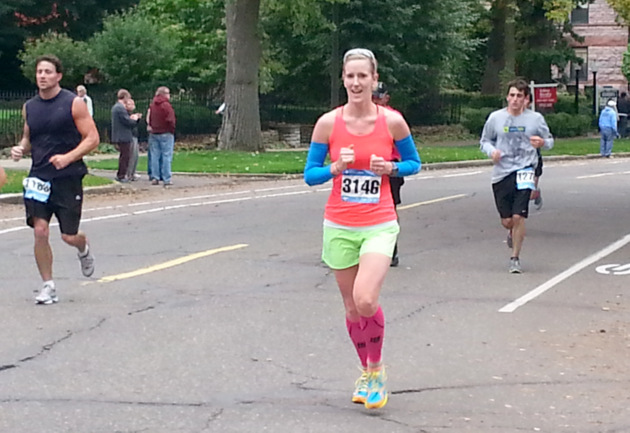 The course was BEAUTIFUL! The race is coined the “Most Beautiful Urban Marathon” — and it certainly is amazing! You start at the Metrodome in downtown Minneapolis, run through the streets of downtown and the up into beautiful neighborhoods. In Minneapolis you wind around several lakes, past some incredible houses, all the while surrounded by greenery and trees beginning to turn yellow, orange, and red. Really, it was perfect! Once you cross the bridge into St. Paul you run along the river, then turn up the hill towards/past Macalester College, down to the capital in St. Paul. The first half is semi-flat, with a few decent hills, then the second half introduces some pretty daunting hills (at least for me!). The whole course was lined with fans, hilarious signs, bands, blaring music, etc. It was certainly entertaining!

The weather, for the entire weekend, was forecasted as being especially rainy and cold. It was pretty wet Friday and Saturday, but Sunday we woke to clear, sunny skies! It was still a bit chilly, but overall it was perfect. I started the race with arm warmers and gloves, planning on ditching both. I ditched the gloves around mile 6, and almost ditched the arm warmers at mile 18, but then the clouds started to roll in and I was glad to keep them on. At mile 25 it began to sprinkle ever so slightly, not picking up until I was done and gone! Perfect racing weather, if you ask me! 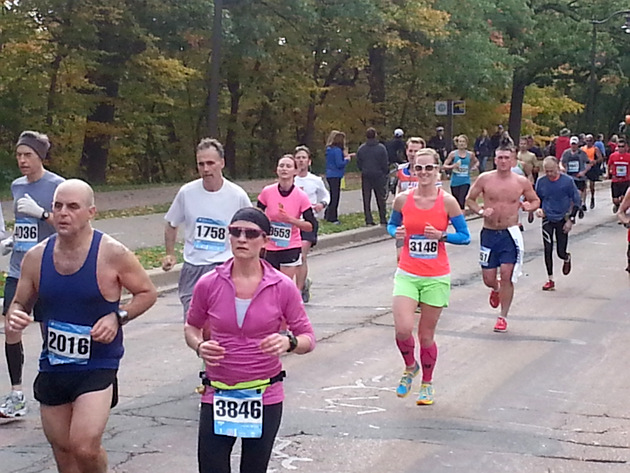 We arrived in Minnesota on Thursday night, and spent the weekend with friends in St. Paul. For the most part, we took it pretty easy. We did a short run Friday to preview most of the hill between miles 21 and 23, then did a bunch of (easy) site-seeing. We went to the expo on Friday — which was huge and full of goodies to buy — in order to leave Saturday free to rest and not worry.

Unfortunately, I spent a lot of Saturday with a terrible belly-ache. I half attribute it to the juicy lucy and fried cheese curds, all of which were delicious, we ate Friday night… I’m not sure if I really can put the blame there, but I was REALLY uncomfortable. It mostly subsided by Saturday evening, when we went to another friends’ house for a pasta dinner.

After a semi-restful night of sleep, I woke up Sunday feeling pretty good. I ate some oatmeal, drank some tea, got ready, and headed to the start. In the hour leading up to the start I sipped on gatorade and at a few shot-blocks (a change — usually I just eat a gel 10 minutes before the start). After a short jog to warm up, I found my spot in corral 1 and waited for the gun! I was incredibly nervous, and honestly felt like I was in the wrong spot: did I even train for this? Yes, yes I did. Calm down!

I positioned myself between the 3:25 and the 3:35 pacers, aiming to start with the 3:30-hopefuls at an 8-minute pace. My Garmin wasn’t super happy running through the city, and was thrown off by bridges, etc. so I couldn’t really rely on it for the first mile. I thought I was going easy, but Garmin says I did a 7:29. I took miles 2 and 3 easy, as well, and my chip says I did the first 5k (3.1 miles) averaging 8:05 — slower than I’d planned, but totally ok with me.

Miles 4-10 felt easy to me, but I was averaging 7:38 — which I felt guilty about. I slowed it down a little bit at mile 10, aiming for 7:50-7:55 pace. I was feeling awesome! I was pretty sure I could keep averaging around 7:45 pace, and wasn’t feeling fatigued at all when I hit the half-marathon mark. At this point my Garmin already said I had run an extra .2 miles (apparently not cutting the tangents as well as I thought…), so while the chip time says I did a 1:42:43 half-marathon, my Garmin said I hit 13.1 closer to 1:41! Sweet!

Then at mile 14, all of a sudden, I knew I had to stop. I knew I was about to throw up, and that there was no stopping it. I pulled off the course onto the grass, threw up a bit, walked for 10 feet, pulled off and threw up some more, then got right back on the course and started running. Of course this happened while friends of Derek were standing right across the street to cheer — good timing! Luckily, the only thing that came up was a lot of gatorade — did I drink too much before the race? Wouldn’t I have just had to stop for the bathroom? I still don’t know WHY it happened (and it’s not the first time), but I’m pretty sure it’s not from over-exertion. I wasn’t struggling at all, physically, I just HAD to get it out of my stomach.

At that point, I was pretty worried. I was running again, but had wasted 90 seconds and was nervous that I’d start to feel weak and have to drop out. I consciously slowed down and told myself not to worry about pace: just run as fast as feels smart, and don’t look at your watch. I ended up averaging 8:12 until mile 21, not as fast as I’d planned, but good enough given the circumstances. I, thankfully, didn’t feel that much weaker. There was definitely a difference, but I was afraid my pace would drop significantly out of my control. I ate less than planned, as it was nauseating to try and eat gels, but enough to keep some fuel in my body. I’d planned to eat a gel at 4, 8, 12, 17, and 22. I ended up eating at 4, 8, 14.5 (after the “situation”), 19, and 24 — the last three being hard to get down, taken in very small doses, and probably only actually eating 3/4 of each gel. 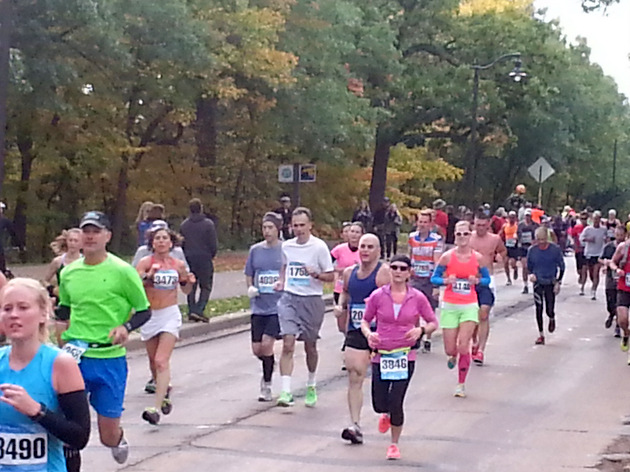 The hills, all along the course and specifically after mile 20, were really hard for me. I slowed significantly on the big climb between miles 21 and 23, averaging 8:23 for miles 21-24. One foot in front of the other! After the big hill, it mostly flattens out (there are a few more little inclines), and I tried to pick up the pace — mostly unsuccessfully.

When I hit mile 25, and actually looked at the clock, I knew I’d have to run REALLY fast to PR. I turned it up as much as I could, and actually averaged 6:47 for the last half mile (which was the most significant downhill, so it was easier), but didn’t quite shave those 17 seconds I needed for a PR! Dangit!

I’m on the fence between being disappointed and being content with my performance. I would have really liked to PR, and am confident I would have easily run a sub 3:25 had my mile-14 situation not occurred — but mile 14 DID occur, and there’s nothing I can do to change that! Even if my pace had dropped exactly the same, eliminating the 90-second stop would have given me a minute+ PR — and I’m 100% sure my pace would have been faster the rest of the time. I’m pretty frustrated by that.

The silver lining is that I still qualified for Boston 2015 — which was the entire point of doing this race, anyways. It would have been nice to be sub 3:30 so I could register earlier than most people, and be almost-guaranteed to get accepted, but hopefully I’ll be safe with this time anyways. The cut-off for Boston 2014 ended up being around 1 minute 40 seconds under BQ time — so my 3:30:09 still gives me a few minutes wiggle room. Fingers crossed!

Part of me really wants to sign up for another race just to get that huge PR I’m sure my legs are capable of, but the other part of me feels really done with running. I wasn’t all that excited going into this race, and am frankly not sure that I enjoy running enough to keep doing marathons. I’ll do Boston, for the experience, but that might be it! Maybe that will change in a few months, and I’ll find a race I’m excited to train for — but don’t hold your breath.

As usual, Derek was an amazing super-fan husband! He spent the week before the race pumping me up, talking race-details, encouraging me, and believing in me WAY more than I believed in myself. He got up early (which is no small task for him) to drive me to the start, then met me at miles 2, 7, 17, 22, 25, and the finish — all with a smile, encouraging words, gels, gatorade, and anything I could possibly need. I’m incredibly grateful for his support, along with the rest of our family, before, during, and after the race!

If you want more details, here are some numbers, video, and pictures!