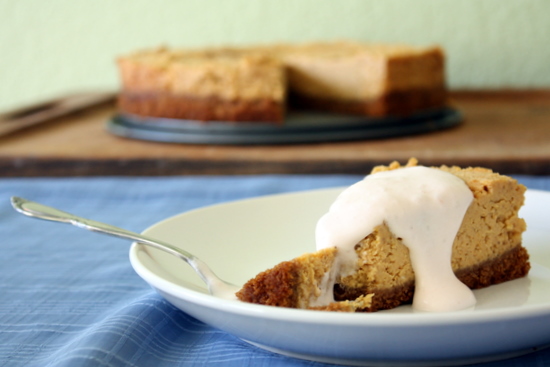 My family is huge on Thanksgiving. Really, it's the only holiday we celebrate together each year. Growing up we would always have ample amounts of pumpkin pie, pumpkin custard, apple pie, chocolate pecan pie (to be posted later this month!), and a few other random sugary treats. Besides liking Thanksgiving, my family likes sugar. This is the biggest understatement of the century - we eat sugar like you wouldn't believe! Back to the point: Last year I was deemed "in charge" of desserts for the first time. And the turkey, but that's another story. I must be growing up. My philosophy, especially around my family, is that you can never have too many desserts. They WILL be eaten. I made pumpkin pies, apple pie, pumpkin custards, pumpkin brownies, pumpkin bars, and this spiced pumpkin cheesecake. The cheesecake was a new addition, and it went over really well! I don't think it lasted very long, and I anticipate the same occurrence this year. 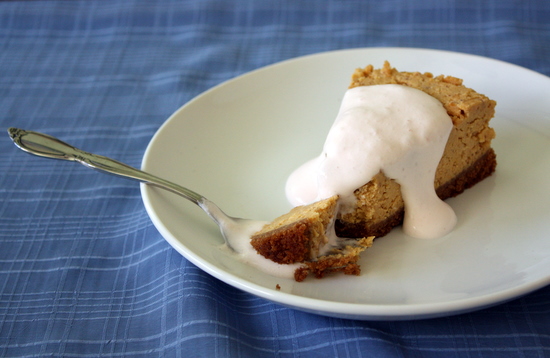 This cheesecake is AWESOME. I'll admit that I too go crazy for pumpkin, not just in the fall, but year round. It just tastes like home! How can you pass that up!?

The key to this cheesecake is the spices: be generous with your use of them. I can't think of a bigger pumpkin letdown than biting into a pumpkin _______ and tasting ... just pumpkin puree. Really? Who is THAT lazy? Bring on the cinnamon! Bring on the cloves! Bring on anything to make it punch me in the mouth!

The perfect fall dessert, this cheesecake has a wonderfully crumbly graham cracker crust and a smooth, creamy filling that complements crisp fall air.