Notice: Function add_theme_support( 'html5' ) was called incorrectly. You need to pass an array of types. Please see Debugging in WordPress for more information. (This message was added in version 3.6.1.) in /var/www/wp-includes/functions.php on line 5831 Turmeric Broth with Caramelized Mushrooms and Black Rice Recipe

Alright. I’ve totally been holding out on you guys. This recipe — this one right here before your very eyes — just might be my favorite dish of the year. Or century. Or millennium. You think I’m being dramatic with all these superlatives, but I’m not kidding: this was amazing. Absolutely amazing. I’ve been holding out because I don’t think the pictures get that point across enough! I’m sure I could take better pictures, but I’m also sure they might never look as good as this recipe tastes. Not only is this delicious, but it’s really easy, too. I made this in April and kept the various ingredients in my fridge (made and ready to be assembled for every.single.lunch) until we left for Vietnam. 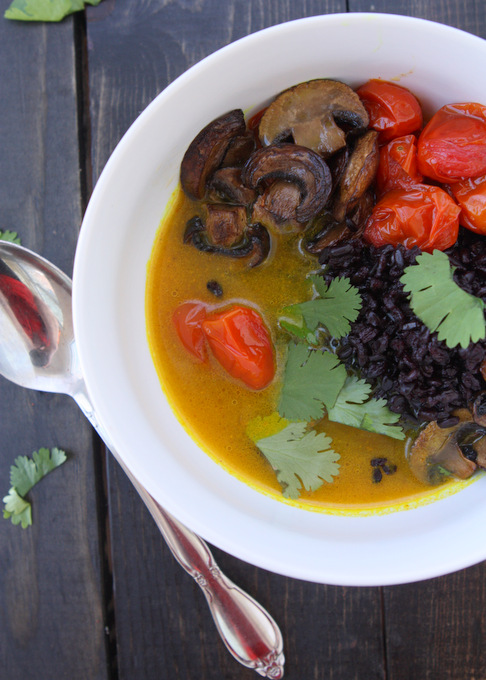 By now you’re probably saying “what’s so special about this recipe?” Um, what isn’t special about this recipe? First off: turmeric broth. Obviously, you need to like turmeric. We drink copious amounts of turmeric tea (ground turmeric + honey + lemon + pepper + hot water. LIFE CHANGING), so turmeric broth wasn’t a shock. I love the flavor, and the slight punch-in-the-tongue you get every time. I stuck with the pepper and lemon combo, too, but replace the water with broth. You can use chicken or vegetable — whatever you want. Cook the turmeric with some oil, then add onions, then broth, and let it simmer together for a bit — you’re cooking out the “raw” taste in the turmeric powder. I haven’t made this with fresh turmeric, but if you can get your hands on it I suggest you try — I imagine it is even better!! I kept the amount of turmeric in the recipe here rather conservative — if you know you love it, feel free to add a bit more! 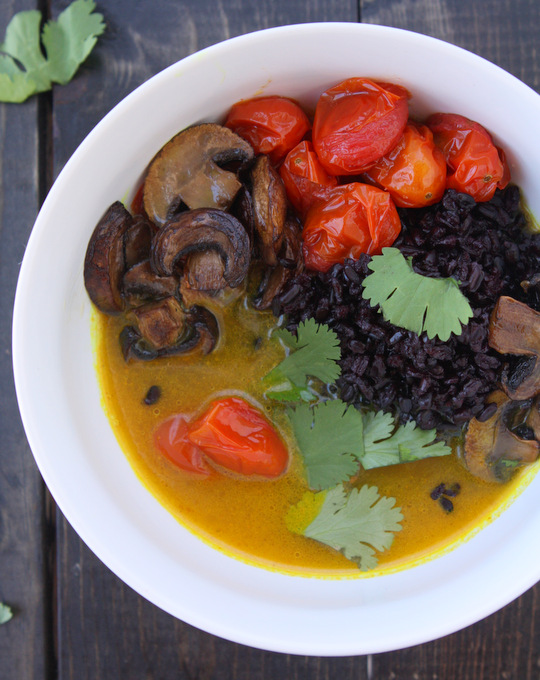 Next let’s talk about the mushrooms. I’m generally pretty “meh” about mushrooms: they’re delicious, but I won’t seek them out, and they’re often not the star of the show. Here, despite the many stars in the show, the mushrooms were ESSENTIAL! I cooked mine in a nonstick skillet over medium-high heat, without stirring for the first few minutes, so that one side of them is golden-brown caramelized pure deliciousness. If you’ve never had a caramelized mushroom… go get on it! NOW! Holy mushroomness! So good. 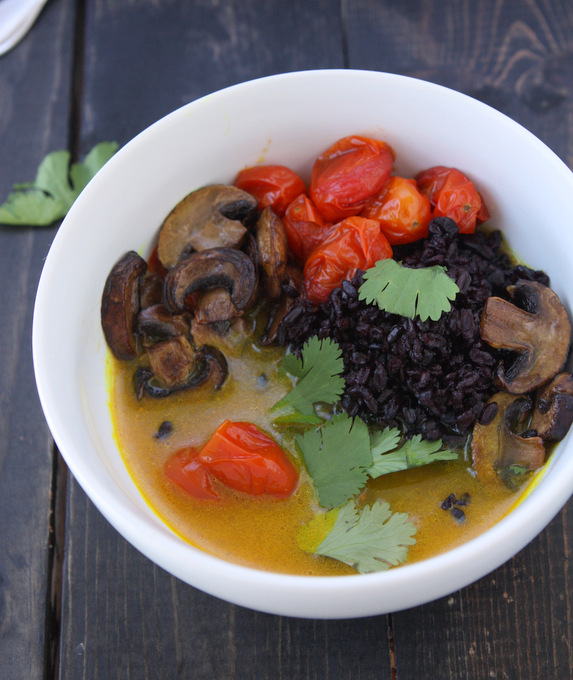 You think we’re done? WE AREN”T! Roasted cherry tomatoes. OMGOMGOMG. Does that look like GOMG to anyone else? Whoopsies. You know what I mean. I roasted my cherry tomatoes until they were crinkled and sometimes black and always hot and flavorful! Olive oil and salt help these babies reach their full potential. This is the one part of the recipe that really can’t be replicated straight from the fridge — there’s something about a fresh, hot, seed-bursting, flavorful roasted tomato that goes away when it cools. Good thing it’s easy to roast them! Throw these on in abundance! 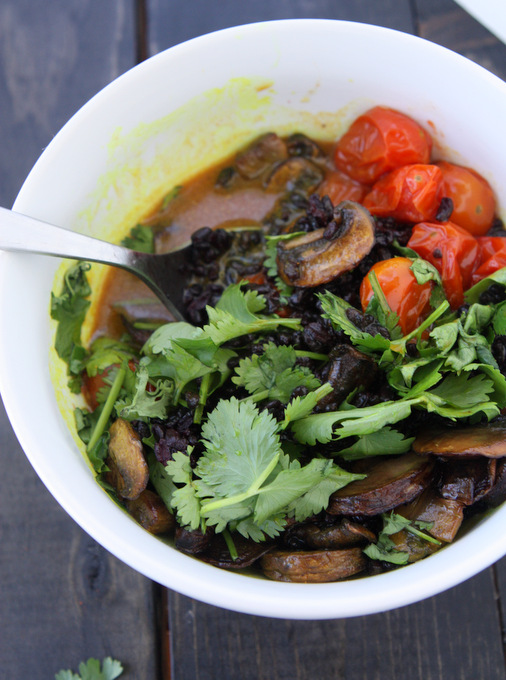 While the black rice certainly is delicious here, but you could easily sub it for another grain — rice or otherwise. The final star of this show (for me, and I can already hear some of you screaming in despair), is the cilantro. SO MUCH CILANTRO! These pictures are totally inaccurate because had I taken a picture of what I actually ate, it might just look like a pile of green. I like cilantro that much. The more the merrier! With a squeeze of lime, I can think of nothing better than a good pile of cilantro. Yes yes and yes!

With that, I expect you all to rush out and make this ASAP! It’s ridiculously healthy (have you read about the benefits of turmeric? You should be eating it all the time!), bursting with flavors and textures, and I’m guessing this is a bit different than your usual dinner!