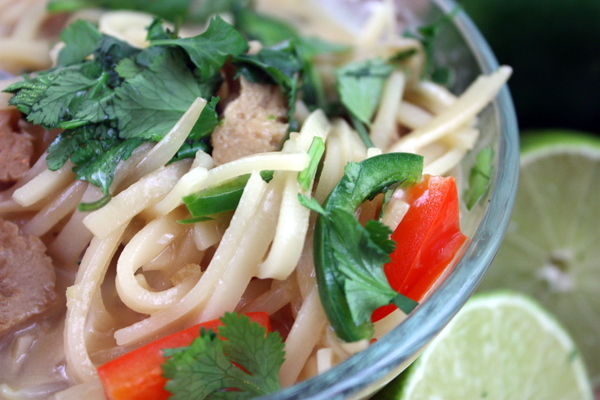 If you haven't noticed, I'm on a lime kick. Lime in guacamole. Lime in Mexican soup. Lime in pound cake. That last one is only in my imagination right now, but it will soon come to fruition! Just you wait.

This soup was, no joke, mouthwatering. Fantastic. Finger-lickin' good. In short, it was awesome. Even better, it was easy - throw it all in the crock pot and let 'er rip! I saw this recipe, as a slow cooker Thai chicken noodle soup, from Bev recently and thought "I HAVE to try that!" and so I did. I made a bunch of changes due to our small crock pot and semi-vegetarianism, and it turned out splendidly. I was really quite pleased with our dinner that night! It's all in the lime... 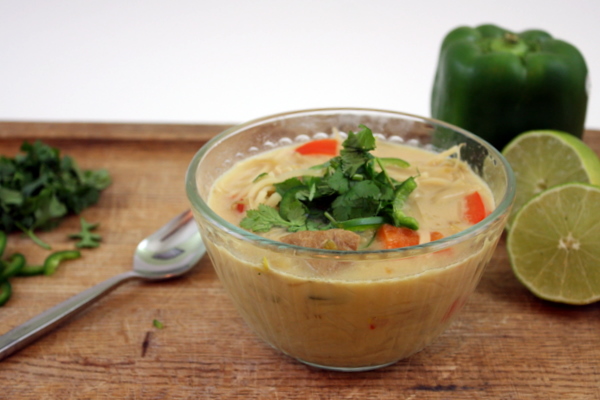 Combine the seitan, garlic, ginger, coconut milk, vegetable stock, diced jalapeño and soy sauce in your slow cooker. Cook on high for 3 hours, or on low for 6.

After 3 hours, mix in rice noodles, bell peppers, and bean sprouts. Let cook on high for 30 minutes. Salt to taste.

Top each serving with a large squirt of lime juice, chopped cilantro, and sliced jalapeño.