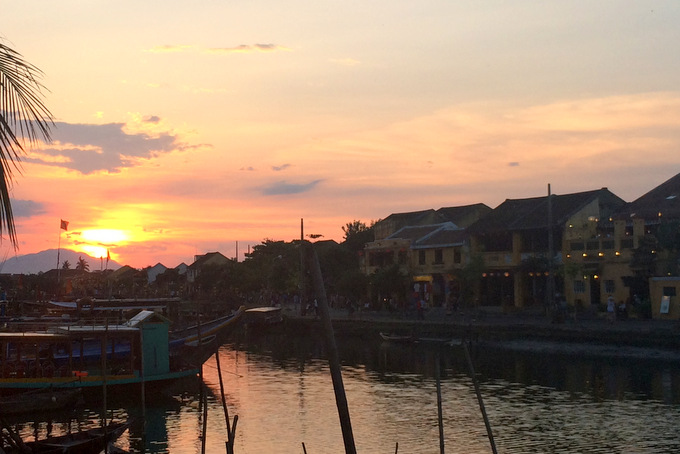 Our time in Hoi An was wonderful! I've struggled for the past 10 days, since we left, to put it succinctly into words. Hoi An is undoubtedly a touristy place — but for good reason: it's gorgeous, charming, and has plenty to offer everyone. There are beautiful beaches, amazing restaurants, lovely architecture, history, culture, and more. We had such a fun five weeks exploring the town, and the surrounding areas! Most people told us we'd run out of things to see in Hoi An after a few days... we didn't. I'll go through a bit of what we did, but I'm sure I won't get to everything — and we didn't even get to see everything there is to see! 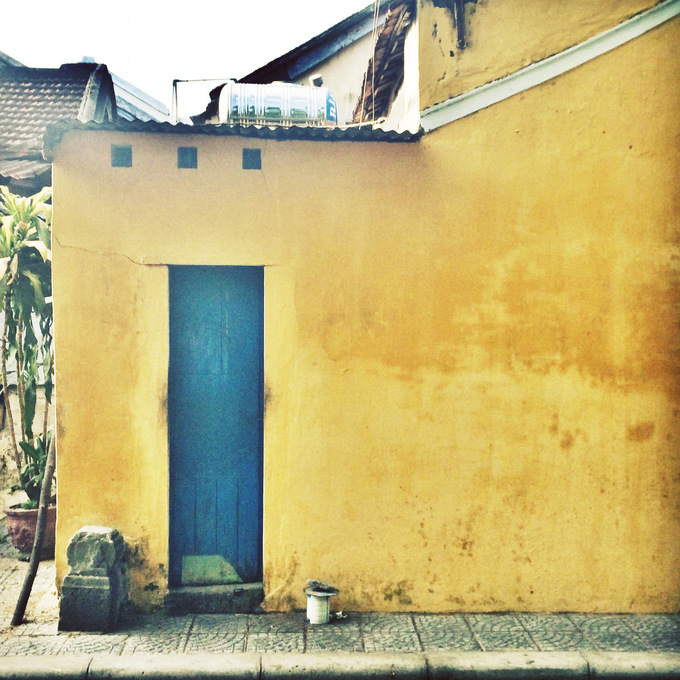 First things first: the food. Check out my five places you MUST eat in Hoi An — that list was hard to make, since there are SO many great options for food in Hoi An. We often ate at the market, which you should avoid if you have a weak stomach, but mostly found ourselves eating banh mi and cao lau at our two favorite spots. Cao Lau is such a great dish, and a departure from the other noodle dishes we've had in Vietnam, I can't recommend it enough! In addition to eating, Hoi An is great for cooking schools. If you want more info on the one we did, which was beyond amazing, check out my post about it here. 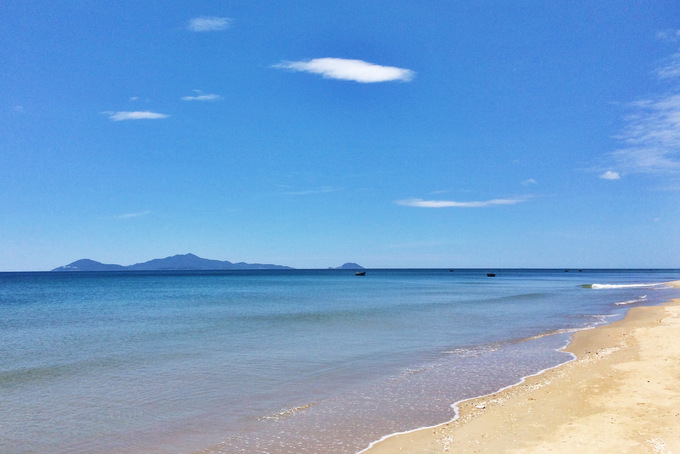 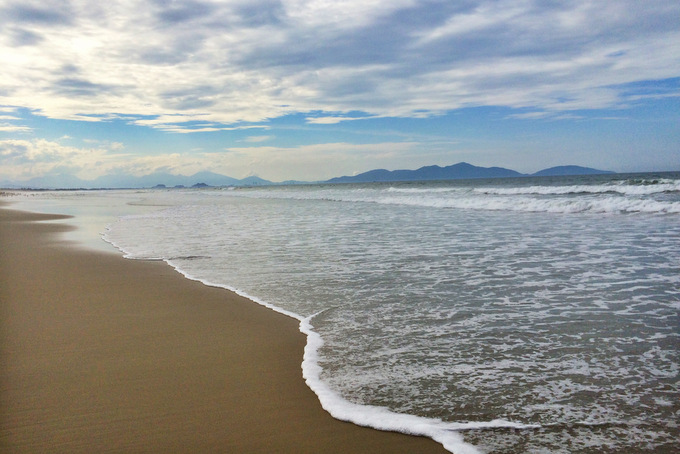 If you follow me on Instagram, you know we spent an inordinate amount of time at the beach. Mostly practicing handstands and getting sand in every crevice of our bodies. There is Cua Dai beach, which most of the tourists frequent, and An Bang Beach, which is up-and-coming. Both of those will be semi-crowded, full of people trying to sell you sunglasses (despite the fact you're already wearing them), and insist you buy an expensive lunch to sit in their lounge-chairs. We opted to go 500m from An Bang beach, where we could park in the shade (for free), walk a little trail to the beach, and enjoy a nearly-private beach most of the time! If you don't need a chair or drink service, this is definitely the way to go. 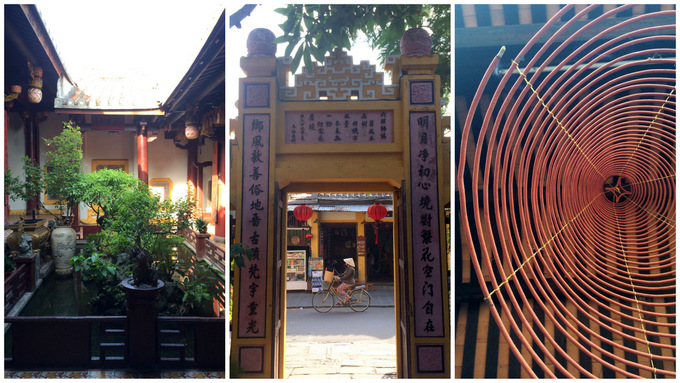 When we weren't lounging at the beach, or working at the Dingo Deli, we were exploring town. The old colonial architecture is amazing, and reminded me so much of Cartagena (perhaps my favorite city in the world!). The yellow walls and bright flowers made walking downtown a beautiful experience every time — and they play classical music over the speakers throughout the old town at night! So romantic! Within the old town there are a number of sites to see — old Chinese meeting houses, pagodas, temples, etc. We spent a day popping around between them to check them out, and were pretty impressed. Hoi An has a rich history with both Chinese and Japanese influences, and you can really see it in the temples and meeting houses. Of course, you have to see the Japanese covered bridge! At night they bathe it in multi-colored lights! 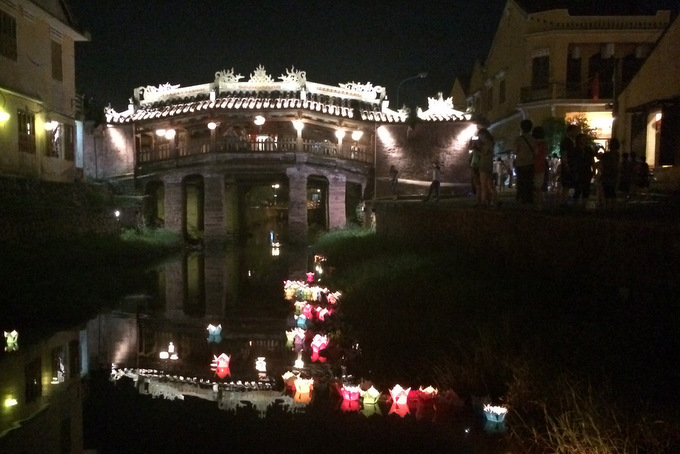 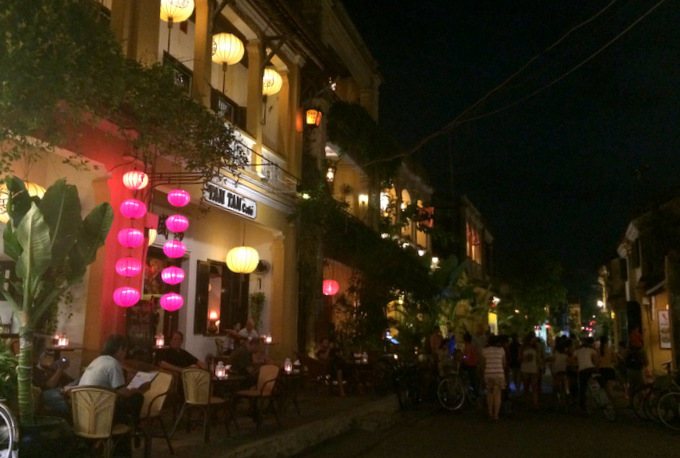 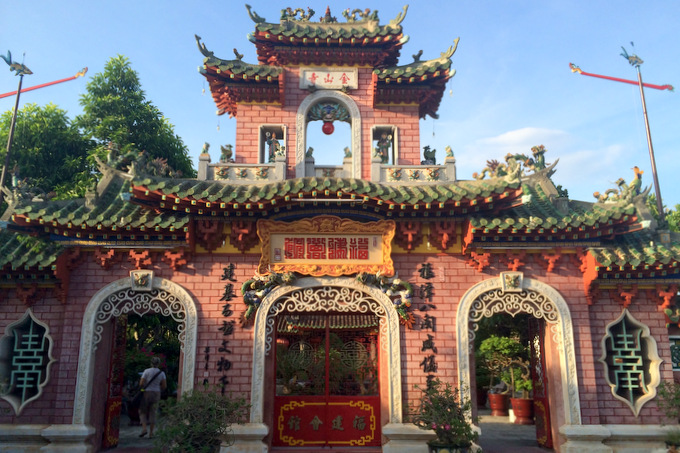 Hoi An is also known for it's tailors. You can get clothes tailored pretty much anywhere in Vietnam, but Hoi An is the epicenter and has the reputation for making the best quality clothing: but you have to be careful! I've considered writing an entire post on this (and still might), because we had two very different experiences with tailors. Ten years ago, there were only a few tailors in Hoi An. Now, there are over one thousand. Many of them are "market tailors" who don't have their own factory, and make pretty much the same stuff as everyone else. Three shops, though, have their own factories and offer significantly superior quality clothing. We found this out the hard way! We started by going to Nhat Vy, which seemed okay at first, but immediately upon seeing the clothing I was disappointed. There was only so much "improving" they could do, the seams were just single stitched seams, and the fabric selection was dismal. They made me two swimsuit tops that broke upon wearing, and I later found out (from our second tailor) that nobody in Hoi An has the appropriate machine to make swimsuits. 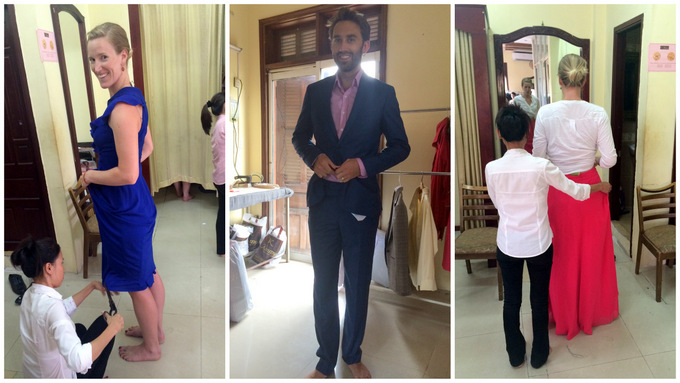 Our second tailor, Kimmy Tailor, is one of the biggest tailors in town. I'm always dubious of the top-dog, but they're the most popular for a reason: they have excellent customer service, high quality fabrics and seams, and can sew some truly incredible things. Their ability to re-create a dress from a picture is impressive! I'm thrilled with the experience we had at Kimmy. They are very honest about the fact that they cost a bit more, but you truly get what you pay for. They'll re-do anything you aren't totally satisfied with, and won't give you attitude (like we experienced at Nhat Vy). I asked them about making me a swimsuit, and they were totally honest about the fact that you should NEVER buy a swimsuit in Hoi An. They could have just taken my money and made me a cruddy swimsuit (as Nhat Vy did), but they didn't! Big points for Kimmy! 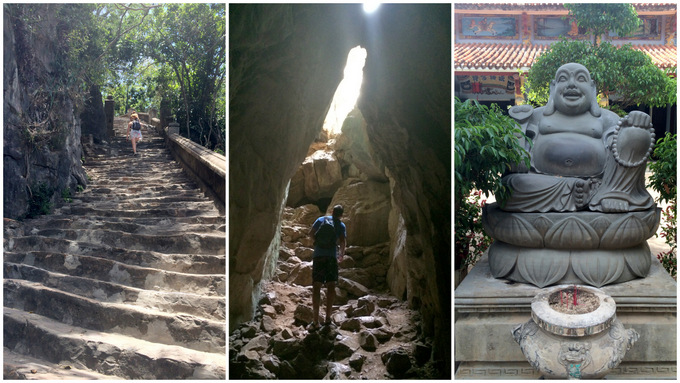 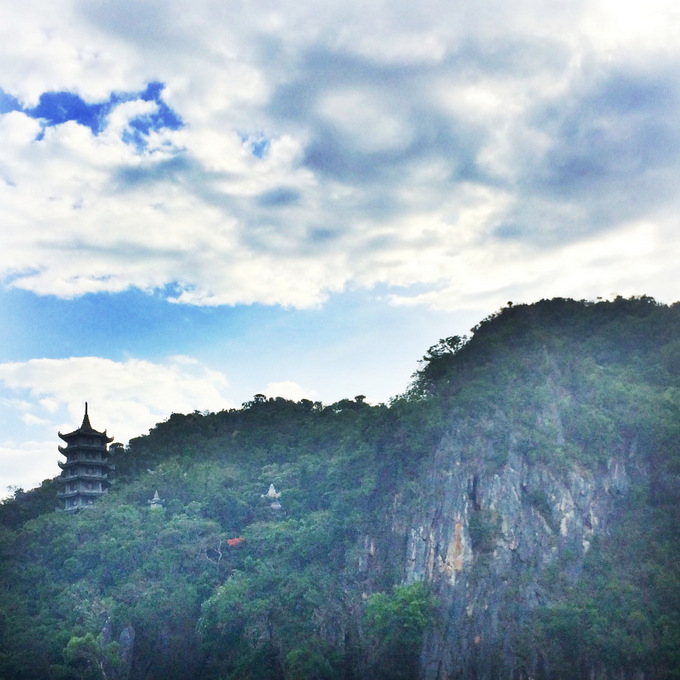 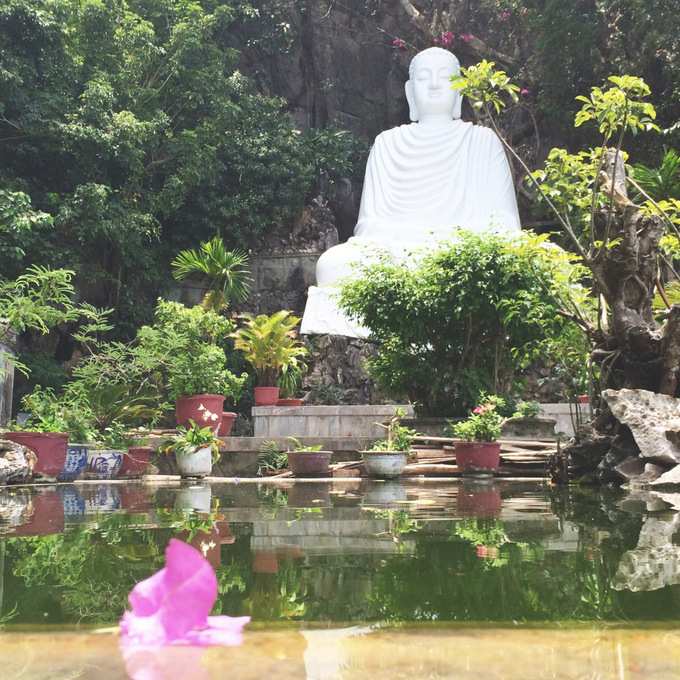 Around Hoi An there are so many things to see! We drove up to Danang on two separate occasions: once to surf, since a storm rolled in and brought some uncharacteristic waves, and once to see the marble mountains. I was wary of Danang, since it's a big city that doesn't appear to offer very much, but we were pretty impressed. There is a sizable expat community in both Hoi An and Danang, which means there are plenty of great dining options and comfortable places to hang out. The marble mountains were a great trip, too. I thought they'd be super kitschy and unimpressive, but they were really quite impressive! There are many caves, temples, Buddha's, etc. all throughout the big karsts — which stand out from otherwise totally flat land. We spent a few hours hiking up and around the main "mountain" and exploring all of the caves. It might be a little bit kitschy, and there are people trying to sell you all sorts of marble sculptures, but the it's still beautiful and well worth the trip.

Another day trip is out to the Cham Islands. We went with Cham Island Diving, and went diving! They also offer snorkeling, if you aren't into diving. The diving is alright — certainly not the best in the world, but we still saw some pretty cool stuff! It was fun to get underwater, and then spend some time on the Cham Islands afterwards. They're beautiful! You can't get out to the islands in the rough season, but if you're there when the water is calm it's a pretty easy trip out {this coming from a very sea-sick person}. Bring a lot of sunscreen! 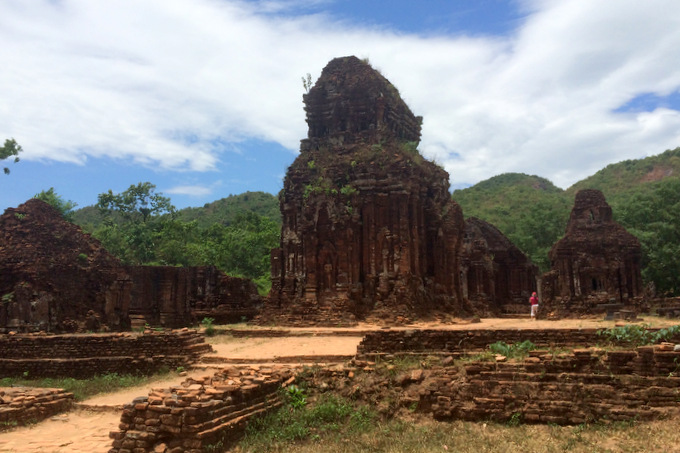 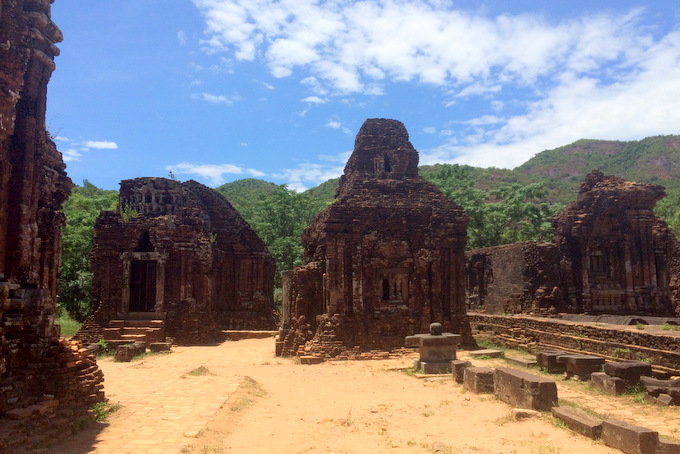 My Son was another fun excursion from Hoi An. It's about a one hour motorbike ride out to the temples, which are like a mini Angkor. Many travelers we spoke to said that if you haven't been to Angkor {in Cambodia} yet, My Son is worth it. If you HAVE been to Angkor, you might be disappointed. The ruins at My Son are pretty cool, but there really isn't that much to see. A lot of the ruins were destroyed {by the Americans} during the war. Some have been rebuilt, some are still piles of rubble, and some weren't harmed. It's worth a quick trip out, but be ready for a HOT day! Since the temples are inland, and in a protected valley, you don't get the ocean breeze cooling you down — it's noticeably hotter than the coastline! 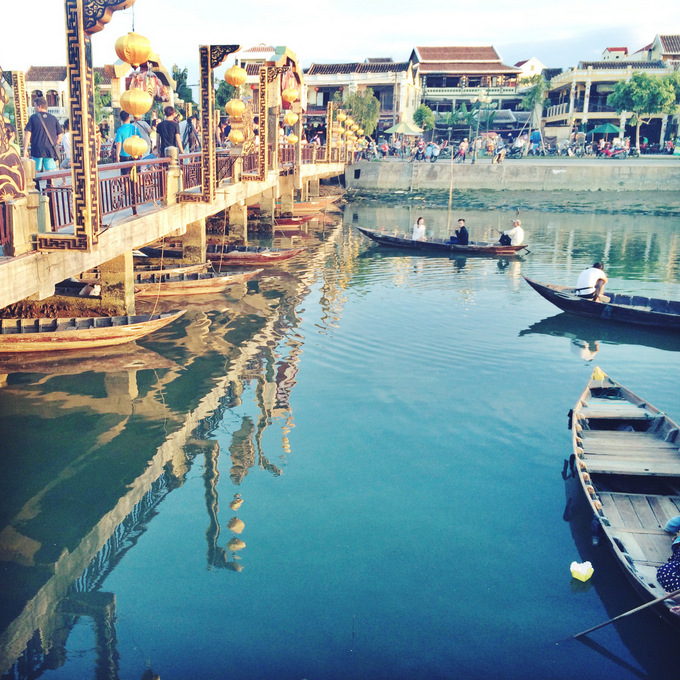 When we first got to Hoi An, we stayed at Jackfruit Homestay — AMAZING. Such a beautiful place, with the nicest room we'd stayed in at that point, and great hosts. We loved our room there, and the breakfasts were delicious. Once we decided we were going to stay in Hoi An for an extended amount of time, we rented a house. If you want to rent a house in Hoi An, I'd recommend going through Alex at Nha Toi Real Estate Hoi An. We were glad to have our own space, a kitchen, and a bit more freedom than you get at a hotel/homestay. Our house happened to be just down the street from the yoga studio (which has since moved), which was amazing! If you want to practice yoga in Hoi An, definitely take a class (or 10!) from Stephanie at Hoi An Yoga. She teaches a lot of (hard) Hatha classes, some yin and some restorative. It was so nice to get back on my mat in a class that pushed me more than I usually do in my home practice. 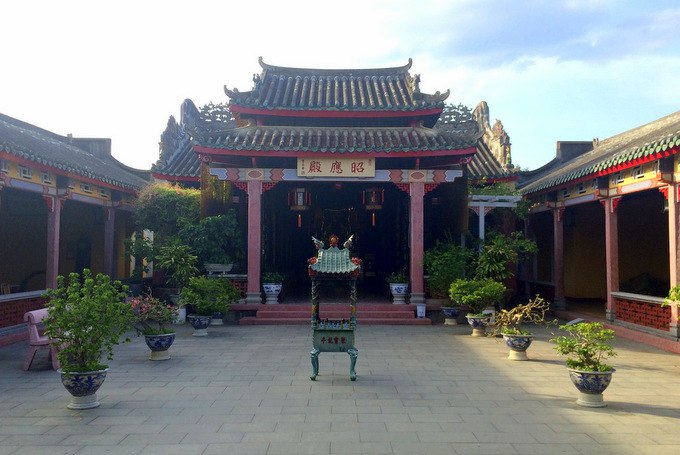 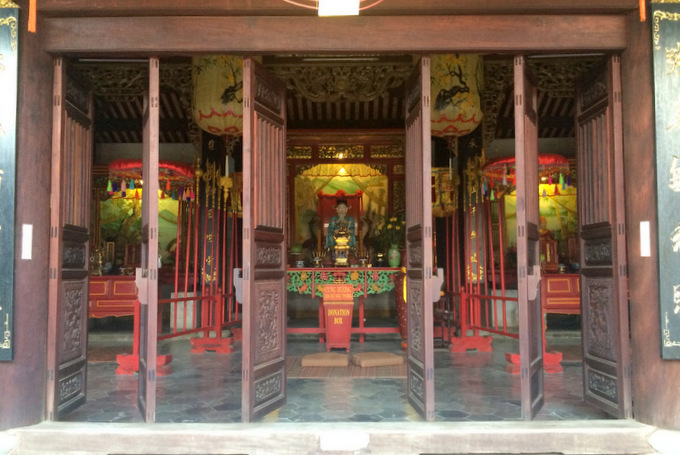 Hoi An was the perfect place for us to slow down and take a little travel break. We've definitely established that we enjoy moving at a slower pace, and getting to know a single location more in-depth. We were amazed at how quickly we settled into our little neighborhood, making hilarious charade-like "small talk" with our Vietnamese neighbors, and becoming regulars at our favorite local restaurants. The community in Hoi An is wonderful, and we barely scratched the surface of the expat community (which is very strong!). I could honestly see myself living in Hoi An for a much longer time {like, years}. We could get everything we wanted at the market, although we mostly ate out because it's so cheap, and never ran out of fun things to do. If you're planning a trip to Vietnam, I'd put Hoi An on the "must see" list!