Notice: Function add_theme_support( 'html5' ) was called incorrectly. You need to pass an array of types. Please see Debugging in WordPress for more information. (This message was added in version 3.6.1.) in /var/www/wp-includes/functions.php on line 5831 Almond Berry Baked Oatmeal Recipe 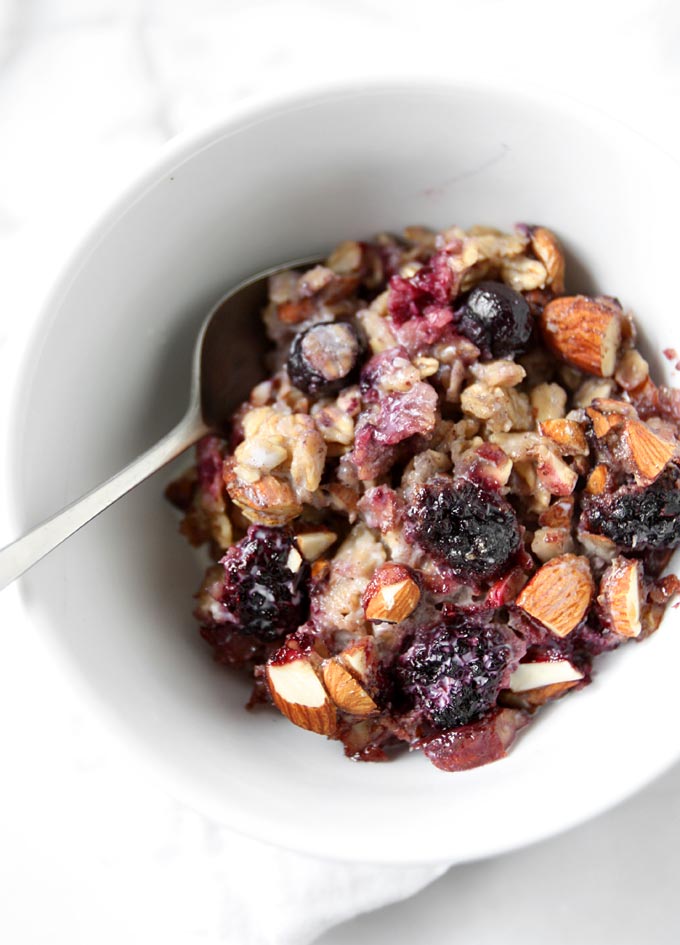 You guys! I feel like we have so much to catch up on! Now that I’M BACK and being a real human being with you all (oh haaay!), I want to return to over-sharing like WHOA. If you follow me on snapchat (@thekitchenpaper) you may already be sick of my over-sharing my little heart out. How many pictures of my moving boxes do you need to see? Definitely not as many as I post: I admit it.

That said: I MOVED! After hiding out at my Mom’s house for a month (thanks Mom and Grandmother! I miss you already!), I found an apartment on the East side of Portland (apparently this is the cool spot to be … I’m new here after 10 years of being in the rockies and Asia!). My brother, who is 100% awesome for all of his help this last week, drove to Montana with me and spent the weekend helping me go through my storage unit (and Merrill! YOU DA BOMB!), pack up a uhaul and the back of his truck, catch up with so so many friends, and drive everything back to Portland. I moved into my new place Tuesday morning, in time to make it to teach my Tuesday afternoon yoga class! Obviously I have not completely unpacked… Yikes. 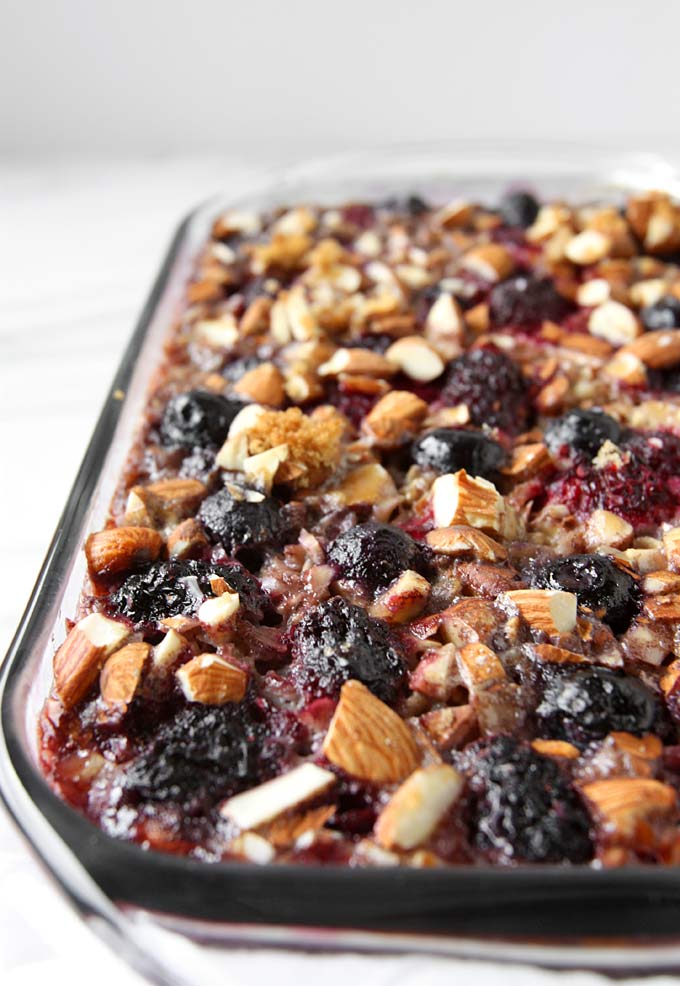 The apartment is only a few years old, so it have nice wood floors, new appliances, tall ceilings, etc. but it is NOT very big. Like, maybe 480 sq. feet? This is a huge change, coming from living in 2-bedroom homes with plenty of storage. Granted, I now have half (or less) or the stuff I did in those homes, but still: I’m downsizing. I’m being brutal with my sorting things into “donate” “sell” “garbage” piles. No room for useless knickknacks here! I’m getting creative with storage and, for the first time ever, figuring out what kind of furniture I really want. The only piece of furniture I own is a white desk I bought a few years ago, which I love, and a mattress I bought on Tuesday. So, yesterday I went to Ikea to start getting the storage situation figured out. I’m sure I’ll be back, but for now I have two massive cube-y storage shelving thingees (surely there is a more concise way to say this?) which will help me finish unpacking. I’m at that awkward point where most things are unpacked, but those that aren’t have no place to go! So: SHELVING! {Once I’m totally unpacked/decorated I promise to give you guys a look around the place!} 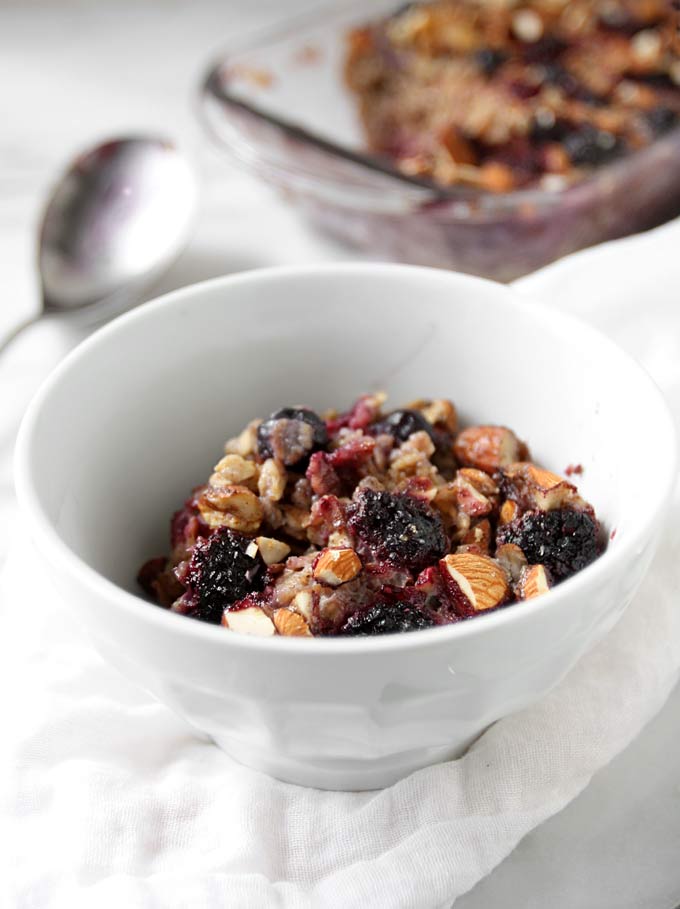 I’m sure I’ll talk about Ikea more another day … as I may or may not plan to go back there a million times and buy everything in sight … but for today: It’s not so bad assembling everything! My thumb is raw and red from pressing those darn wooden pegs in — but I eventually starting using a clog as a hammer and got my cubbies all set up! Now for the MASSIVE one. I’ll do that this morning! The directions, wordless but very easy to understand, recommend having a buddy help you assemble these things … I managed the small one on my own, with some yoga-acrobatic-sketchy maneuvers, but we’ll see how the big one goes. GODSPEED! Can I say that to myself? I am. Deal with it. 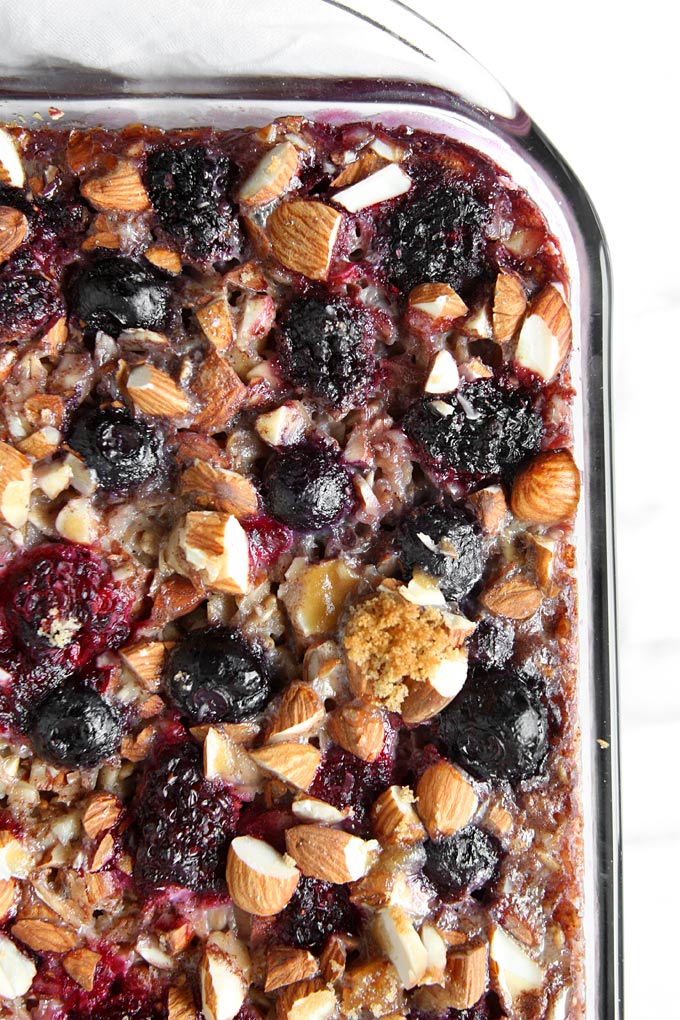 Would you like to hear about this oatmeal? I’m actually REALLY REALLY REALLY excited to share it with you because it’s my new favorite things. Not like “omg this recipe is amazing blah blah blah” that I could say for everything (um, too honest?) but LEGITIMATELY this is amazing. It’s so easy to throw together, then you bake it up and it’s kinda like eating berry cobbler/crisp for breakfast, only a bit healthier (or like, a lot healthier) and with way less guilt. It’s so filling! It’s so berryful! And almondy! ALMONDS! We have to talk about them: they get all crunchy and toasted and UHMAZING in the oven, so don’t worry about chopping them finely. They won’t hurt your teeth and be a big bad crunch — they’re perfectly toasty and YUM! I AM IN LOVE WITH IT! Scratch that. I love it. It’s delicious! I bet it would also be good with pecans, instead of almonds, and heaps of brown sugar (if you’re so inclined). Lemme know what variations you try! xo

I often make this without the brown sugar on top, and find it to be sweet enough!