Notice: Function add_theme_support( 'html5' ) was called incorrectly. You need to pass an array of types. Please see Debugging in WordPress for more information. (This message was added in version 3.6.1.) in /var/www/wp-includes/functions.php on line 5831 Bridger Ridge Run: Race Report Recipe

The easiest way to describe my experience doing the ridge run would probably include a hefty amount of expletives. I’ll aim for more eloquence to convey how I feel about the run!

It was RIDICULOUSLY HARD.

Luckily, I went into this race with little expectations for myself personally. I KNEW I was bad (am bad) at uphills, and this course has a lot of uphill. Well, I was right! The day in a nutshell is: I was passed by everyone on the ups, and passed most of them on the flats and downs, but not by enough to really matter. Meh.

The Ridge. Photo courtesy of the Big Sky Wind Drinkers.

Derek and I drove up to Fairy Lake, where the race starts, last night to camp. The road up there is awful, and we knew our morning would be much more relaxed if we just slept at the start. It was great to spend a night in the woods, and not have to get up until almost six am, opposed to four! This race is divided into five (or six?) waves, starting five minutes apart from each other. Based on my marathon time, they seeded me in the second wave — predicting a 4:45 finish according to their calculations [which, thankfully, I have heard are totally inaccurate. I was a bit discouraged to know I was so much slower than my “predicted” time!]. I definitely should NOT have been in the second wave, as I’m pretty such the entire third wave and possibly much of the fourth passed me in the first three miles. Oh well! 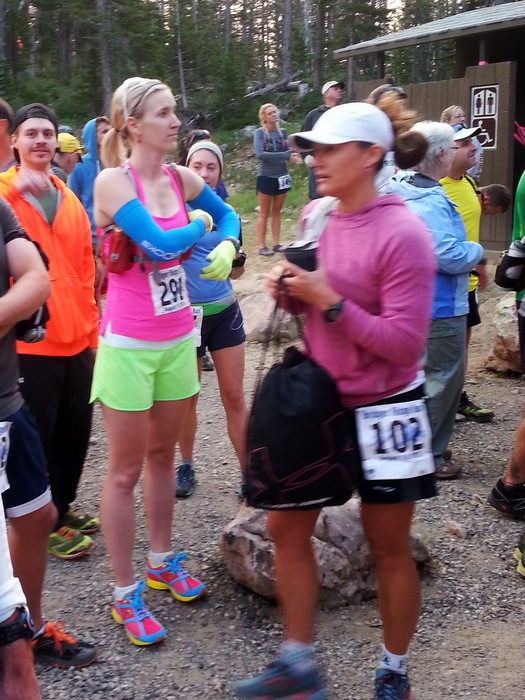 Just before the start. I was glad to have arm warmers and gloves for the first four miles! Photo by Derek Loudermilk.

The first 2.3 miles go up to the peak of Sacajawea, at 9,650 ft (Fairly Lake is below 7,000 ft). Literally, from the get-go, my legs were BURNING. I just can’t handle uphills! I thought I was going to vomit the entire 2.3 miles up to the peak. I got to the top in 53 minutes [for comparison, the winner did this in NINETEEN MINUTES! How is that even possible!?], and had planned on eating at 40 minutes, but had felt too sick to do so. I made myself stop for a minute and eat a few blocks at the peak, before heading down. This was the most frustrating part — it’s the sketchiest bit of trail (REALLY steep, slippery, slidey, scree fields), and it was impossible to pass for a bit. I was going MUCH slower than I wanted to be, in a big pack of 20 or so people. We finally reached a point where I thought “Now or never!” since the ground was temporarily a bit slab of rock (kind of). I stepped out of line and bolted around the pack, to a variety of cheers and “Look at her go!” calls. Ha! If only they knew they’d catch me pretty darn soon… 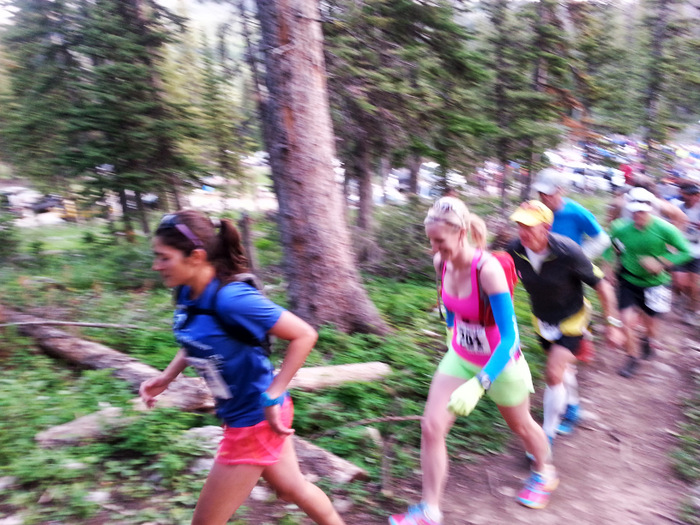 The start of Wave 2. Cramming 50 people onto a single-track trail immediately means fast hiking, for the most part. Photo by Derek Loudermilk.

The next few miles are the nicest (after getting off of Sac), flattest, and fastest. I actually logged a 9-minute mile! There are about 3 miles of gentle trail, but part of it climbs a fair bit, going towards Ross Pass. Derek was there to cheer me on at Ross Pass, barely! He had to drive down the sketchy road from the beginning, up another sketchy road, then mountain bike up a VERY steep trail to see me. What a guy! I threw him my arm warmers and gloves at that point (which I’d been very happy to have going up Sac).

After Ross Pass is the steepest part of the run — going back up to the ridge. I think it’s something like 1,400 feet of elevation gain in about a mile. OUCH. I trucked along, very slowly, still trying to make myself eat when I could. Going up was always too hard, so I usually had to eat on the downhills… which was also not ideal. 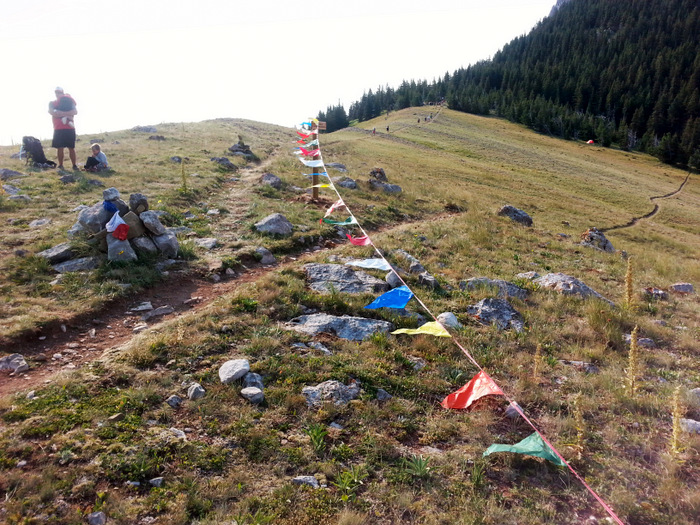 The trail out of Ross Pass. You can see the ridiculously steep part coming up! Photo by Derek Loudermilk.

The next 8 miles, until Baldy, were just plain hard. Despite the course “leveling out” a bit (um, it actually doesn’t at all, it’s just more “rolling”), I still struggled a lot. I was totally fine on flats and downhills, passing people right and left, but as soon as there was the slightest incline, my pace dropped dramatically. It’s actually quite frustrating. It’s like I have a max-speed for going uphill, and it feels RIDICULOUSLY hard no matter how much I try! Being passed by 70-year-old women (go, girl!) is a little bit discouraging. No joke, I finished 8 minutes behind a 70-year-old woman. Granted, she probably weighs half of what I do (my ultimate excuse for being slow on hills), but still… I should be better at this!

Baldy is the last major milestone, and marks the beginning of the end of the course. It’s about 4.5 miles from the finish, but also represents the end of any major uphills. There are still a fit little hills, but for the most part it’s just straight down. Anyways — the 4 miles BEFORE Baldy were absolutely the worst for me. I think I was really close to bonking, almost losing it, and really had to give myself a talking-to “Mary: YOU HAVE TO EAT. I know you don’t want to, but you HAVE TO” to get myself to choke down some blocks. Blech. I was not in the mood to eat at ALL, but when you’re out busting your buns for 6 hours, you really have to. I basically gave up in those few miles. I was pretty miserable, knew I was not going very fast, ready to throw myself of the edge of the mountain (ok not really), and mentally just needed to get to Baldy to put in any effort. My slowest mile was during this period, and took me almost 30 minutes.

Luckily, I made it to Baldy! My friend Kim was there with super encouraging words (and water! and pickles! which I actually ate!), and I took a minute to actually sit down and rest. I’ve been up Baldy before, so I knew what to expect from that point on. I knew I could rock the downhills, and that I was REALLY close. 4.5 miles might not seem that close, but when it’s (mostly) downhill, it was really encouraging.

I passed more people in the final descent than I imagined possible — many that had passed me on a climb HOURS earlier. My legs were definitely tired, but downhill is my strongpoint. I just kept going, quick feet, all the way down. Frankly, I just wanted to be DONE. At the finish, one of the guys who had passed me hours earlier, said “I was surprised to see you pass me, and you made me look like I was STANDING STILL with how fast you were going!” Well, I suppose I know what I’m good at. 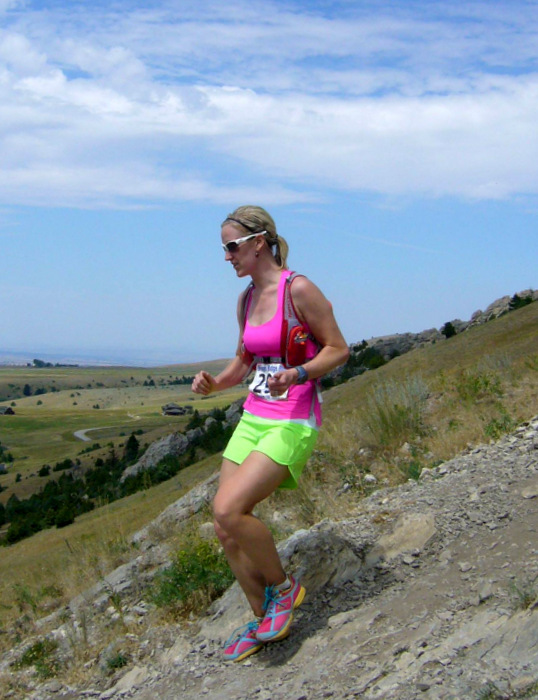 Coming down below the M, final quarter mile! Photo by Pilar Manrique.

I ended up finishing in 5:54, a far cry from what I thought I *might* do, but totally acceptable in my mind. I could have trained a lot harder, but honestly I think it was mostly just about the experience. I’ve done the Ridge Run, and never want to do it again! Most people seem to do it over and over, trying to PR, and I honestly have no desire to even think about that. I’ve learned that runs with a lot of climbing are REALLY not what I’m built for. At all. Why suffer through that? I can rock a flat or downhill race, and that makes me MUCH happier. No need to suffer.

I’ve spent the last three months trying to find the right trail shoes, unsuccessfully. I tried a few different brands, then decided to go with what I knew worked for the road: Newtons. I ordered a pair of their trail shoes, and after 20 miles I broke them, and knew they just weren’t working for my feet. Luckily the people at Newton are AWESOME and sent me a pair of their Gravity shoes. They’re essentially the same as my road shoes, only with rubber on the sole of the heel (my road shoes don’t have any rubber on the heel, as they’re not supposed to touch the ground!). I ended up running in my new Newton’s, and was really happy with them. Even though they’re not trail shoes, they worked perfectly for me!

While I was physically pretty miserable most of the time, I was really glad to discover that the runners were all incredibly nice! There was a lot of camaraderie, encouraging cheering among runners, and polite stepping-out-of-the-way to let people pass. Since I did a lot of leap-frogging (being passed on the ups, and passing on the downs), it was nice to have people who were courteous and fun to see again. We’d joke that we’d see each other on the next hill!

The weather was mostly great — perfectly cool most of the day, 5 minutes of barely sprinkling rain, and then pretty darn hot at the finish. The last few miles the bottoms of my feet were BURINING from friction, and increased temperature in general. By the time I crossed the finish line I was in serious need of shade. It was HOT. 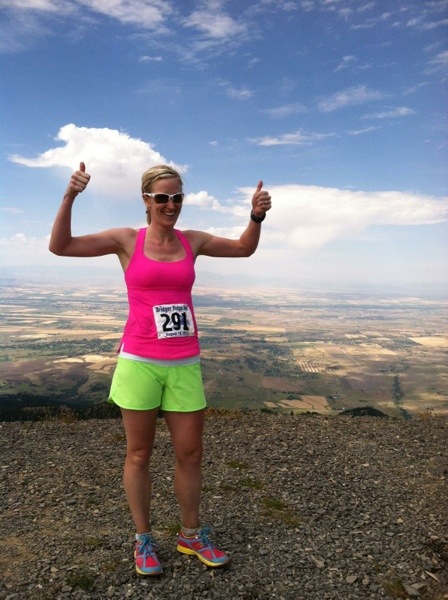 Looking a lot better than I was feeling at the top of Baldy! The incredible volunteers were filling my hydration pack up. Photo by Kim Roush.

One nifty thing we tried out for this race was using my phone to track me! We downloaded the app Life360, and my Mom and Derek both joined my “group” so they could see where I was at various points along the way! The ridge has service for most of the run, so they could see me moving along the ridge, and would have known if I’d stopped at any point for a significant chunk of time. I did send two texts during the race (weird), during the dark points before Baldy. One to Derek said “I’m dying.” and one to Mom simply saying, “Dying.” I’m not dramatic at all, am I? Ha. They both replied with encouraging words! How could I text during a race, you might ask? Well, at that point I was alone and going 2 miles per hour… so it was pretty easy to send a quick dramatic death warning.

Luckily, Derek proved (once again!) to be a wonderful soigneur. He brought me a cold Izze, cold/wet washcloth, flippy-floppies, and a smoothie. Perfect! We hung out at the end for a bit, waiting for friends to finish, then came home for a long nap (which I couldn’t actually fall asleep for), and then headed to the post-race pizza party. After not being able to eat all day, I was glad to finally chow down on some pizza!