I haven't wanted to talk about running since Jackson (ugh, can we forget about it already?)... which also means I haven't really been running much since Jackson. I can't ignore it anymore though, because I have some serious races coming up! I finally signed up for a second marathon (since I can't run Boston 2014, I need to re-qualify after September to get into 2015!), but we'll talk more about that in a few weeks.

Right now, my focus is the Bridger Ridge Run. AKA "America's Most Rugged Trail Run." AKA perhaps the death of me. Check out this sweet old school video (can I say that about 2003?) to get an idea of what it's like:

If you want to check out more info on the ridge run, here is the official Bridger Ridge Run page, and here is a blog all about the run.

The ridge run is a lottery to get in, so I entered in June figuring I'd regret it if I didn't, and perhaps wouldn't even get in. Well, I got in. I have to do it now! It's about 20 miles (there are various places to lengthen it, should you get lost), with 6,800 ft of climbing and 9,500 feet of descending. Ouch. On top of all that, it's a really technical run! I'm seriously considering wearing bike gloves to protect my palms from the rocks — at some places you need to climb up over big boulders (nothing needing a rope).

I had never done any of the course until this weekend, when I decided I really need to get training. I only have 5 weeks, and I know I'm still grossly out of shape! Saturday we started at Fairy Lake, where the race starts, and did the course to about the halfway point (Bridger). At Bridger (which is our local ski area), we descended the ridge and hiked down to our shuttle car. All in all, it was probably a 12 mile day. Doing that hike (we didn't push it, so didn't run very much) made me realize this race is going to be 1) incredibly hard, 2) very technical, 3) not something I feel the need to be competitive about. I'll still go as hard as I can, but just finishing this beast will be a feat in and of itself.

Sunday, since I'm a crazy person, we hiked up from the other side of the course. This means starting at the "M" trailhead and going up the ridge backwards. We went up to Baldy (4 or 4.5 miles), then turned around and ran down. It was exhausting, but definitely good for me. I need to do a lot of downhill running (STEEP) to get my quads used to it. Uphills will be slow no matter what, but I can keep going if need be. Once your quads are shot from going downhill, it's really hard to keep going.

I also need to practice downhill running to gain confidence (and skill) for the loose trail. I'm really confident in my technical downhill running skills (I leave Derek in the dust all the time, ha!), but once the trail is loose and slippery (as it is for a lot of the ridge) I get timid and down want to fall. Considering my wedding is the following weekend, I should probably take precautions to not bust open an eyebrow or break and arm. These things happen regularly in the Ridge Run (yikes).

My training is pretty loose at the moment: hike up steep hills as much as possible, then run down them. I'm doing more yoga, abs, lunges, etc. to build up some strength. I've been riding my bike a bit, and I think cycling legs translate better to mountain running than to flat road running. The one thing I really haven't been doing is running miles on the road. I'm never really "on the road" anyways, but usually on more rolling trails than steep mountain trails when I run in town. I need to incorporate more miles around town just to get my legs used to the long miles (especially with said marathon coming up shortly after the ridge run).

Balancing marathon training and ridge run training seemed a bit daunting at first, but I honestly think the strength I'll get from mountain running will be a big benefit going into the last 8 weeks of marathon training. As long as I'm still getting good mid-distance runs (6-8 miles) twice during the week, and perhaps making one of those runs a speed/tempo workout, I think I'll be all set for the marathon. 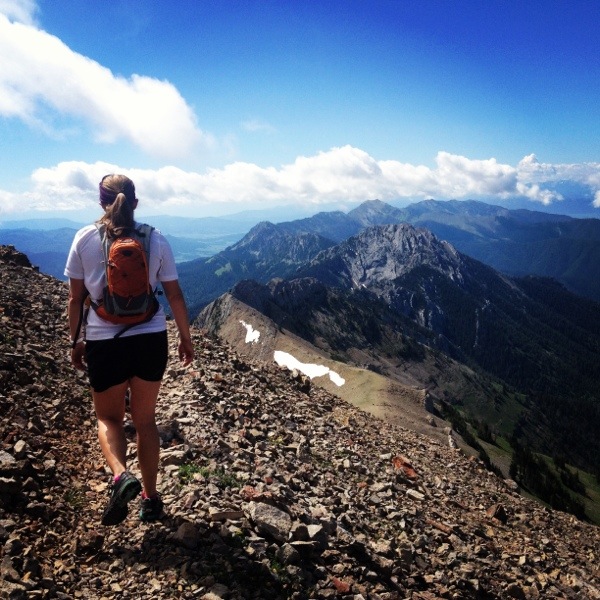 I'm going for a lofty PR in the marathon (more on that later), but for the ridge run? I think I just want to finish. I initially thought I'd like to break 5 hours (based on my marathon time and the organizers formula to determine finishing time), but I know I'm slower on uphills than your average runner, and I'm just not in as good of shape as I was in March. Perhaps I'll hone in on a goal as we get closer, but I think this is the kind of race that, at least the first time, you just run to finish. If I ever do it again, I'll have a baseline to set goals from.

Have any of you run the Ridge Run before? Any tips? How do you feel about mountain vs. road races?