{all photos by iphone}

After one week of being in Vietnam, I can definitely say I love it here! Yes it's hot, and yes I saw a cockroach in our bed (SCREAM!), but other than that: Vietnam is awesome. We're loving the people (so friendly!), the food (so flavorful!), the sights (so beautiful!), the culture (so new to us!), the history (so old!) — just to name a few. This post will be a light rundown of our time here in Hanoi. We've already been to Ha Long Bay and back, but I'm saving that for a different post. Look for it soon! 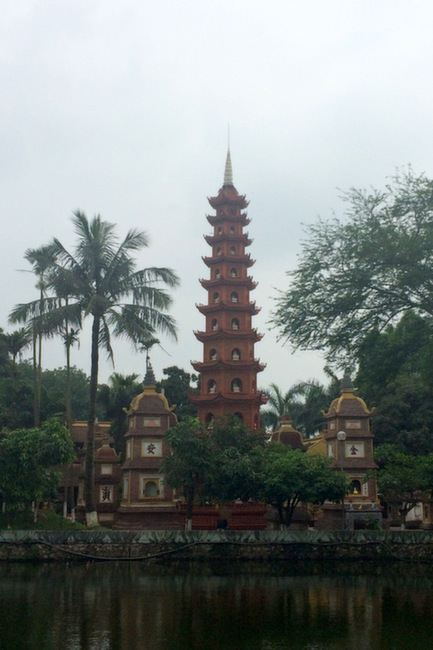 Hanoi is a bustling city, to say the least. The fact that we're still walking, and not flat on the pavement thanks to a motorbike, is nothing short of a miracle! We were warned, by everyone, that the traffic here was crazy, but I didn't really believe anyone until we tried to cross the street. It really takes just stepping out at the right moment and walking slowly, consistently, and purposefully, to make it to the other side. We've actually become quite good at it, I think! (knock on wood). I can't imagine driving either a car or a scooter in this city, much less riding a bicycle. We've yet to see any accidents, though, so it must be possible! 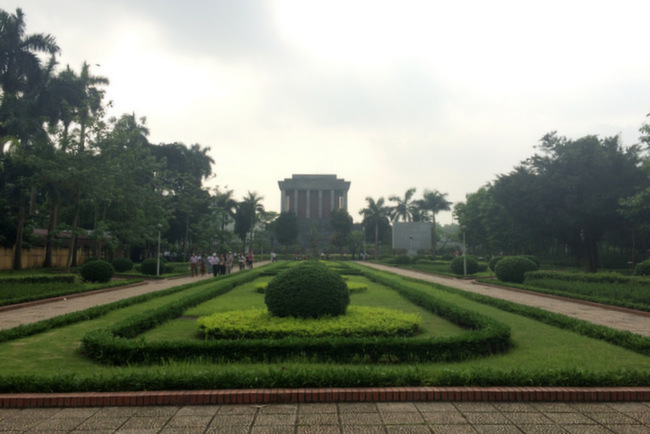 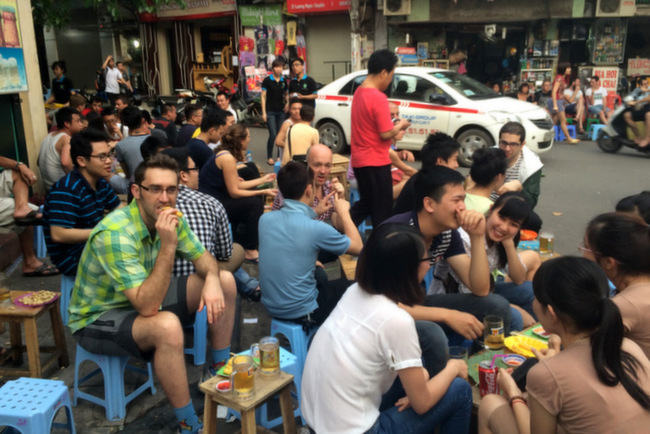 We've had five days in Hanoi, which has been nice: we can take it slow. We've taken two work days (we do, after all, still have to do work!), which we've spent at cafe's, sipping on Vietnamese coffee and tea. The amount of sweetened condensed milk I've consumed (along with coffee) in the last week is verging on inappropriate. I don't plan on stopping! When we aren't working, we wander. We've had a few things on our list — the Hoa Lo Prison ("Hanoi Hilton"), some temples/pagodas, cafes with beautiful lake vistas, etc — but mostly we wander and go wherever looks interesting. This has led us to a variety of interesting places! The train tracks, which were on our list but found through wandering, were a surprising highlight in Hanoi. I can't imagine living in such proximity to a working track, especially with all of the children running around in the area! Life is certainly different here. 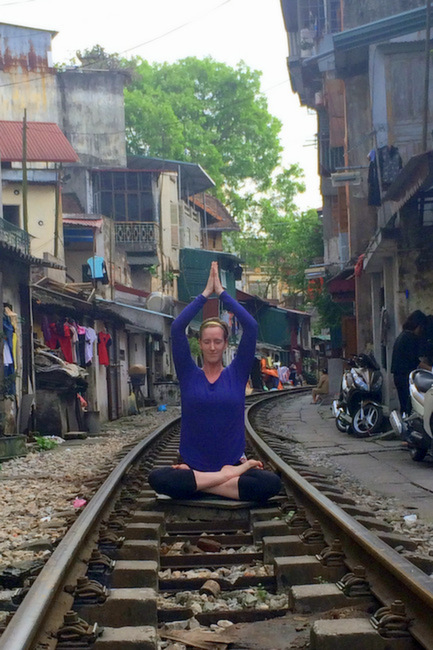 We're gradually learning more Vietnamese, which has been a great way to stop getting swindled! Our first cab ride here, on our way to the Ho Chi Minh complex, I could tell was awry after just a few minutes: we were driving in the wrong direction, then in circles, for a trip that ended up costing 2x what it should have (according to our hotel proprietress!). My keen sense of direction and map-studying brain had red flags up for the entire ride, but we were useless without some language — we had to pay! We've since learned to chat about pricing before a cab ride, we know our numbers and some basic phrases. Both of us still feel embarrassed about our lack of communication skills, but plan to continue our education as we go. 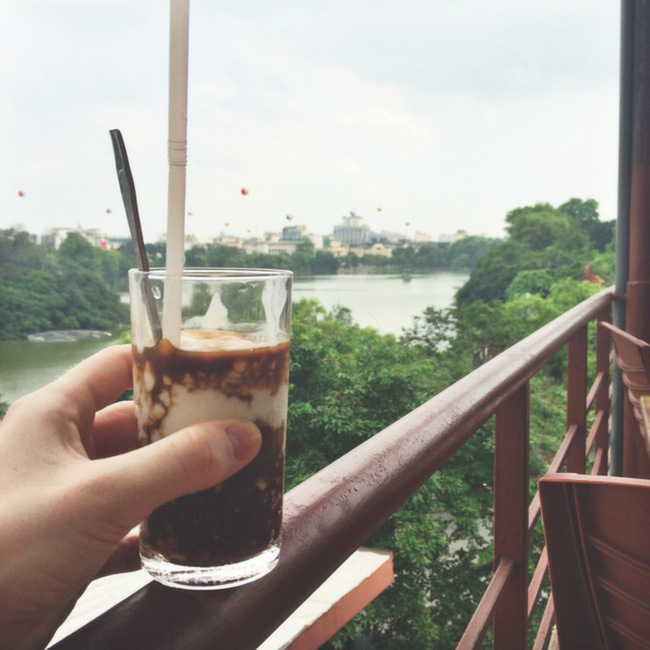 Last week, when we arrived, was the beginning of a five-day national holiday. This meant that the line at the Ho Chi Minh Mausoleum was MILES long (I'm not exaggerating, it was literally at least 1.5 miles long). We did not wait in line to go inside, but rather walked the grounds, went to the botanical gardens, had lunch on Truc Bach lake, and then got caught in a terrific downpour as we caught a taxi back to our hotel. We've been eating breakfast (pho) at our hotel, then lunch and dinner at little 'hole-in-the-wall' places where we rarely see other tourists. The one night we ate at a "touristy" place, we were disappointed! And no, we're not sick of pho, yet!

Neither of us felt like jetlag really got us — thankfully! We slept a fair bit on the way over here, and have just used the "disruption" in our schedule to switch to an early-to-bed early-to-rise schedule. We've been getting up at 5, most days, to go on a nice run and do some yoga! It has felt really nice to get up before the heat really sets in, and explore our surroundings before the craziness of traffic gets going!

As this technically is our honeymoon, we've definitely spent a little bit of time indulging. Derek got a haircut (which is the best I've seen on him, I think!), we got a couples massage at a nice spa, we got pedicures at a hole-in-the-wall (HITW?), snacks at a fancy cafe, and we went to yoga up on the shore of West Lake. Yoga shouldn't seem like a "treat" really, but it was! Mostly because it was the most expensive yoga class I've ever attended ($25? really?)! It was definitely worth it though, and fun to practice in a different country. We explored that area of town, which is known for having more expat residents, and had dinner at a recommended restaurant up there (which wasn't as good as the HITW places we've been to!). 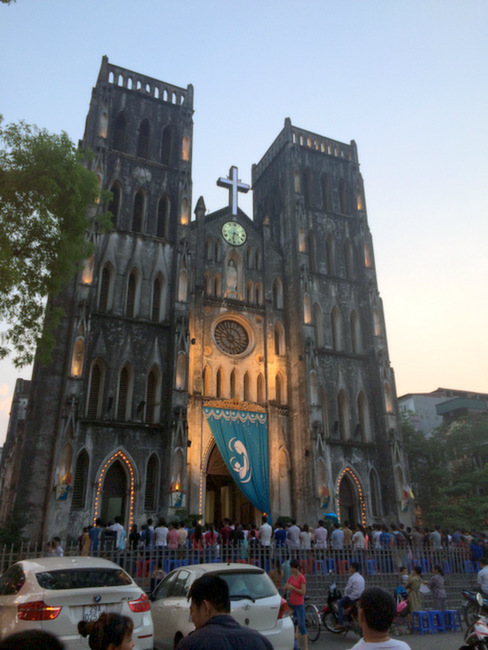 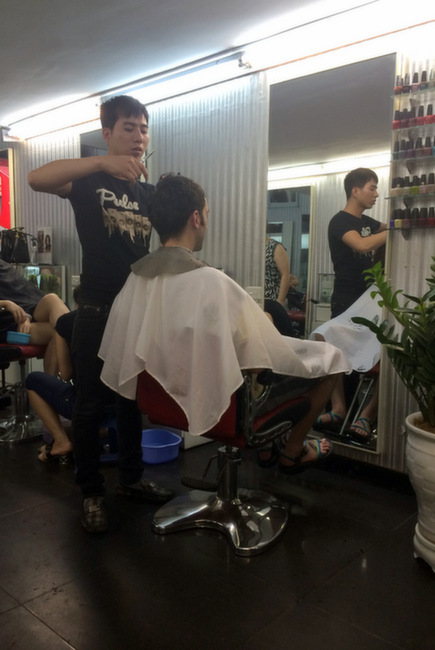 One of the highlights so far in Hanoi has been chatting with the proprietress of our hotel: she is amazing! She speaks decent English, and is so sweet and kind — really eager to help in any way. She's gone out of her way to help us find things (like a knife, or notebook), coached us after the taxi incident, helps us practice our Vietnamese, and encourages us to come back in two years "with a little baby." HA! We had a good chuckle at that piece of advice. It has been wonderful to have her as a resource, and I think we'll really miss her as we move out of Hanoi! 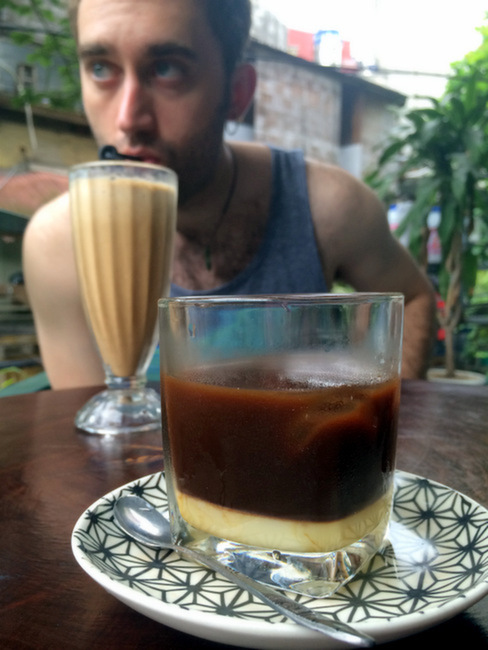 I thought that I would feel really out of place here — and I do sometimes, being so white and tall (which makes me the target of many covert, or not so covert, picture taking!) — but for the most part, I'm amazed at how comfortable I feel. I'm not longing for home, or constantly feeling uncomfortable in the unknown. This bodes well for the next twelve months of nomadic life! I'm assuming my feelings on this topic will oscillate somewhat, but I also think I'll continue to settle into nomadic living even more. Our deliberate decision to slow down, take work days, not pressure ourselves to see everything at once, etc. makes it feel like we have all the time in the world. And we do! 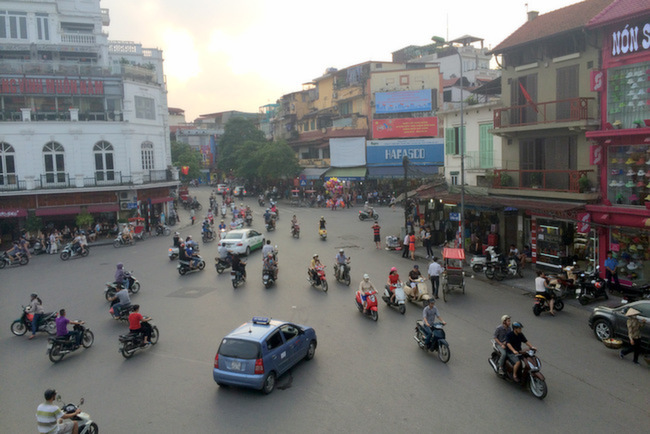 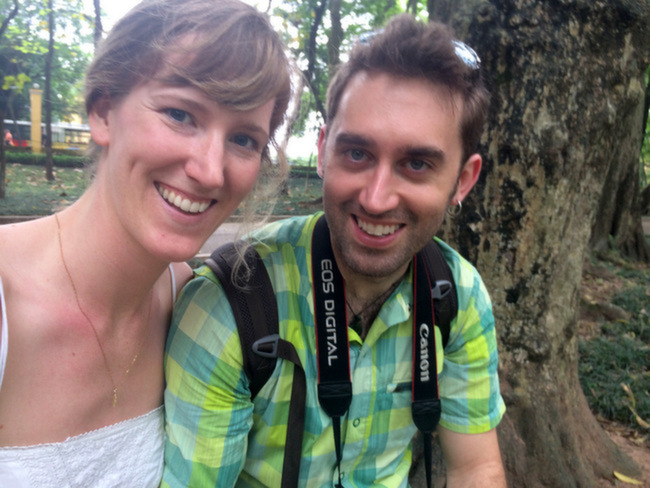 I'm reserving any deep cultural insights for later on in our journey — I think it's premature for me to make any grand observations. At this point, I'm just really trying to soak it all in without judgement: life for the average Vietnamese is very different than life for the average American. I'm really enjoying seeing how life works here, and hope to get an even deeper view of it soon!