{As a reminder, if you want to sign up to only receive food-related TKP posts {not travel posts}, click here! If you're not sure why I'm traveling, check out this post!} 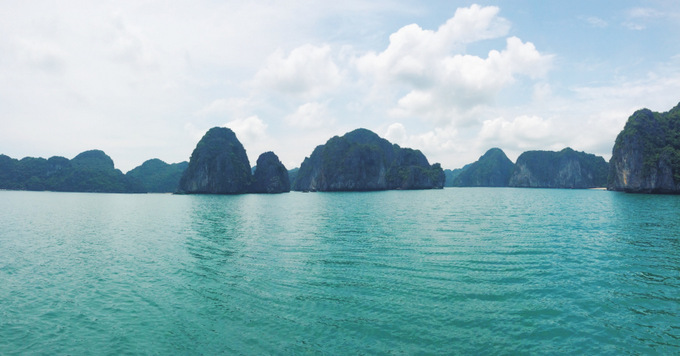 This post is a full rundown of our time in Ha Long Bay, including a night on Cat Ba Island. I'll write another, more concise, post on my top recommendations for people visiting Ha Long Bay. For now, you get to hear all of it! 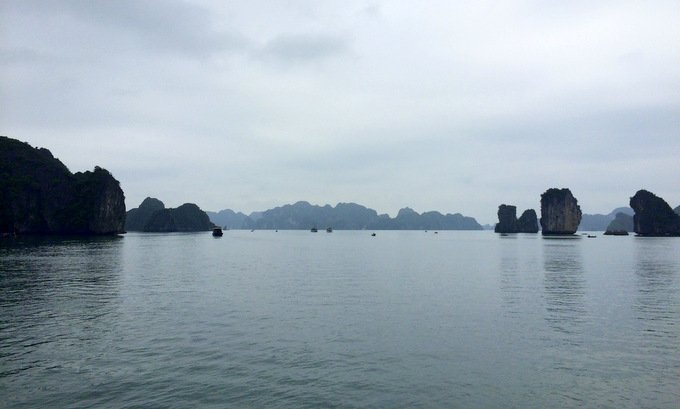 We took a very traditional "touristy" approach to seeing Ha Long Bay: we arranged for a tour while in Hanoi, were picked up from our hotel in Hanoi, and returned there again at the end of the trip. We considered doing it on our own — making our way to the port, hiring a speedboat to take us to Cat Ba island, figuring out all the details, etc. but concluded that the system in place is quite good, and we were happy to hand the details over to the pros!

Arranging the trip was incredibly easy. We could have shopped around the MANY tour companies in Hanoi, and likely found a better price, but were happy to go through our hotel to both support the owner (hotels get a cut when you book through them) and not waste time pinching pennies. We settled on the midrange option — not the cheapest boat (which we've time and again been told not to choose), and not the most expensive boat (which look SO AMAZING but can get ridiculously expensive). We booked the tour just three days in advance, and likely could have done it with even less advanced warning. I hear of many people thinking they need to book long before they get to Vietnam, but I'm convinced you end up paying at least 2x more than you would if you wait until you get here. 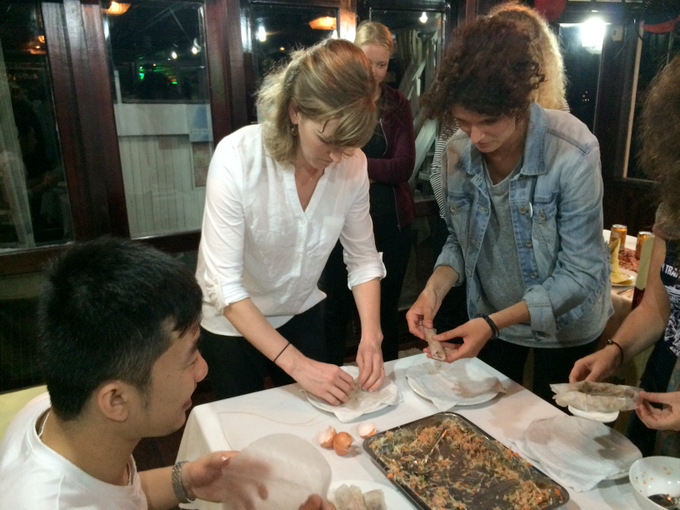 We were picked up from our hotel around 8:30 AM by a nice, clean, air-conditioned mini-bus. After stopping at a few more hotels, we were on the road to Ha Long City! I was excited for the drive because I'd really enjoyed watching the landscape change in the last 15 minutes of our flight into Hanoi — flat rice paddies, cityscapes, big green mountains. I was surprised to see how interspersed the agriculture is with the city. At home I feel like you have to get out of the city before you really see big swaths of agricultural land, and then you don't see much "civilization" other than farm houses here and there. Near Hanoi, it seemed like there would be a large chunk of city right next to a large chunk of agricultural land, alternating back and forth for miles. Eventually we did get into the country and see far fewer populated areas, and then began to see the limestone karsts Ha Long Bay is known for!

After the four hour drive, including a 30 minute break at a warehouse of touristy things to buy, we arrived in Ha Long City. We didn't have to wait around at all, but rather got right on a little boat that scooted us out to our junk boat. I was surprised at the exteriors of the boats — not nearly as fancy and pretty as I'd seen in pictures, or hoped they would be. That said, as soon as I actually got ON the boat I couldn't tell! The inside of our boat was surprisingly nice, and our cabin was really quite amazing! The bed was very comfortable, the bathroom was roomy, and the shower was the nicest we've had yet in Vietnam! 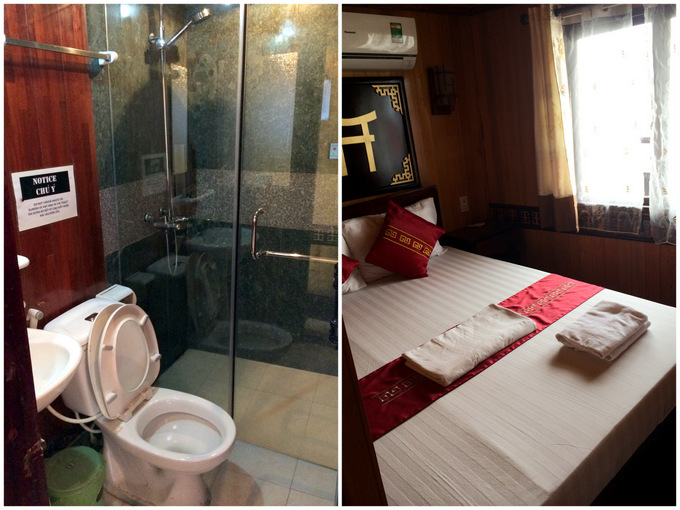 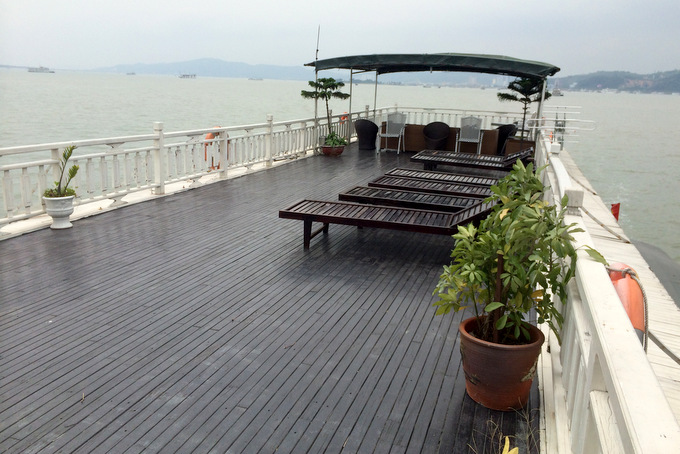 We were served lunch on the boat as we motored towards the karsts in the bay, and then had some time to settle in and take in our surroundings. It takes a little while to really get into the karsts and away from the port city, but once you do — WOW. It's incredible! The pictures really don't even do it justice! We must have been one of the first boats out for the day, because we arrived first at the cove where we (and many other boats) set anchor for the night. From there we took a small boat to the "surprising" cave, which was quite large and impressive. I took these next pictures from the exit of the cave — I've been seeing a beautiful picture of the same view on Pinterest for months now, and loved being able to see it in person! 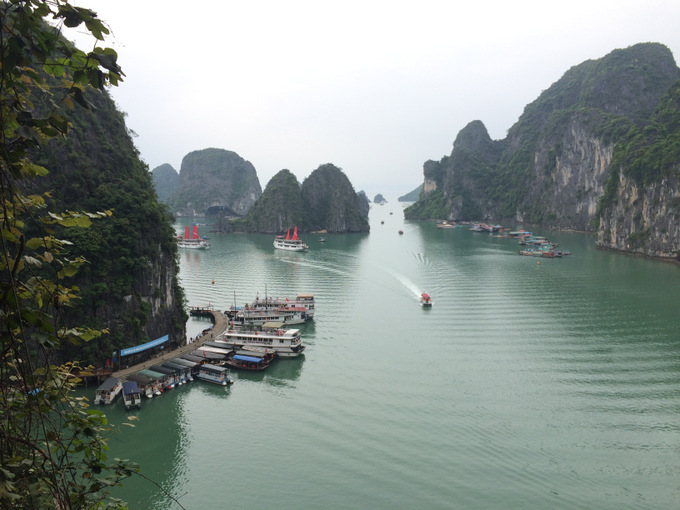 After our walk through the cave, we went to one of the floating villages and were able to kayak around the area. It was sprinkling ever so slightly, but didn't diminish the beauty of the area at all! We saw many more floating villages the next day, but were in awe of the lifestyle at each of them. I cannot imagine a life confined, for the most part, to such a small area. I felt for the dogs on the "islands" — they certainly don't get to run and play like dogs on land! After peering into their houses (which feels weird to do), kayaking into some small caves, and around a few karsts, we were back on the small boat and headed to an island with a beach. There, we hiked up to the top (well, we RAN up a few hundred steps before we were exhausted and had to almost crawl the rest of the way), and had a magnificent view! The sun had come out by this time, mostly. We finally descended and had time to swim or hang out on the beach. I think Derek is the only one the swam from our group — the water was pretty darn chilly! Most of us just peered at the monkeys at one end of the beach. 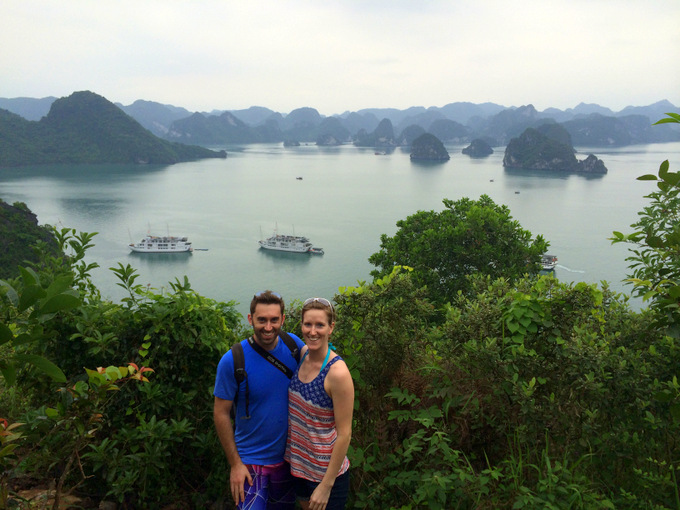 Once we returned to our big boat we had time to shower (nice hot showers!) and watch the sunset before dinner. By this time our little bay was full of other junks, and we could see the varying level of fanciness between boats. I liked hanging out on the very top level, which is just a big deck with lounge chairs, to see everything and enjoy the sea air. Dinner was similar to lunch, and we all sat around talking for quite some time afterward. We were tired and eventually went to bed so we could get up at five o'clock to see the sunrise. We've been up for many a sunrise here in Vietnam, but we've never actually SEEN the sun rise — it just gradually gets lighter. I wonder if in different seasons there are colorful sunrises and sunsets? I would love to see one!

We did get up to see the sunrise, and were the only ones awake in the misty morning. It was beautiful! Eventually we went back to bed before everyone else got up. We motored over to a pearl farm as we ate breakfast, and took the tour after we'd eaten. I was shocked at how expensive the pearls were! Certainly not in my budget! It was really interested to see the process though — I had no idea how commercially cultivated pearls were made! 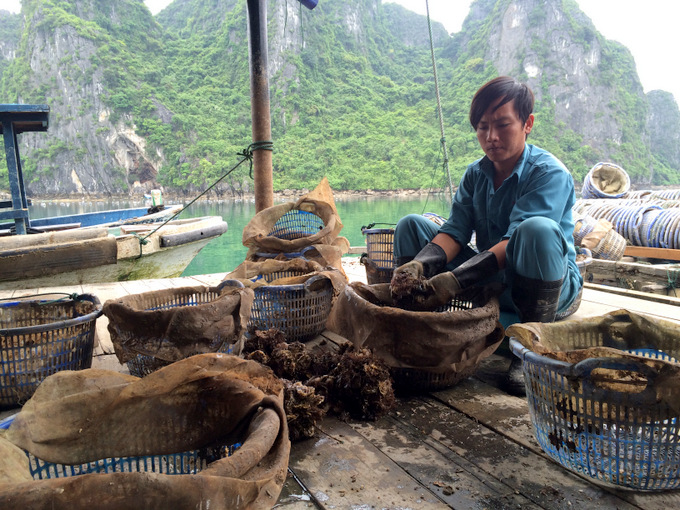 This is where our tour changed from the 1-night tours (more on this later): from here, we packed up and left our first junk. We spent the rest of the day on a smaller, but still nice, boat. This is the kind of boat they take for day tours, with a dining cabin on the first floor and a sun deck up top. We spent a few hours cruising through the bay on our way to the East side of Cat Ba Island. We got off and rode bikes through Cat Ba Island to the village of Viet Hai. This was seriously so much fun! The bikes were way too small, and the ride was not exactly "easy" (it wasn't hard, but if you're scared of bumps or downhills or can't ride up a steep hill, maybe not for you), but we really enjoyed getting to use our legs and zoom through the jungle! The village itself was small, and clearly set up for the tourists that ride into it, but beautiful none-the-less. 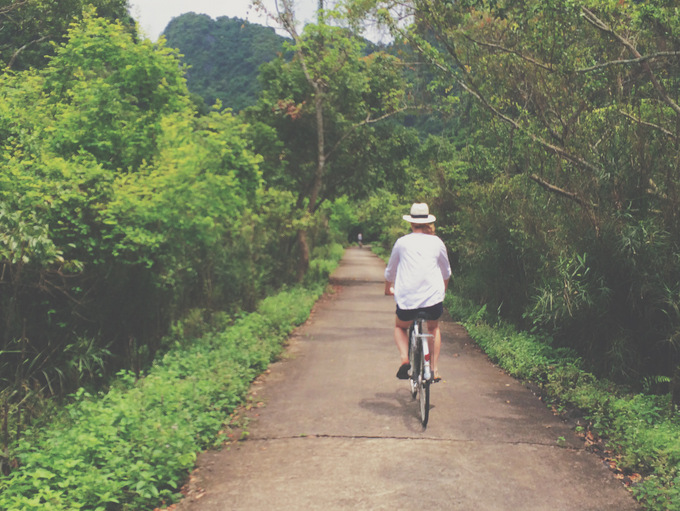 We had lunch back on our boat as we motored further south, eventually making it to Bến Bèo, from which we took a taxi five minutes over to our hotel in Cat Ba Town. Our guidebook doesn't say anything nice about Cat Ba Town, and in fact led me to believe it would be awful: I disagree wholeheartedly. We loved Cat Ba! We took a hike up to the old Cannon Fort (which was quite the warm, steep trek!), which had a magnificent view of the island and the bay. We then donned our swimsuits and sunscreened up for the first time and headed to the beach! The beach was really lovely, even if there are resorts and tourists everywhere. I could easily spent a few more days on Cat Ba island, even in Cat Ba Town. Yes, there are plenty of high-rise hotels on the main strip, but I still found the town to be really charming and the surrounding area to be unbeatable.

After dinner in Cat Ba Town we wandered and found $3 foot massages (45 minutes) that were FABULOUS after a day of hiking around the island! Well worth the money! We then saw something that explained some of the traffic situation in Vietnam: a soccer field-sized area filled with small children (16-32 months, I'd say), DRIVING MINIATURE CARS AND SCOOTERS LIKE MADMEN! It was hilarious! They had tons of tiny little cars and scooters that they were ramming into each other, driving quite quickly, swerving around, etc. Some of these kids really looked too young to walk, and were just holding onto the steering wheels for balance. I guess you have to start young if you're ever going to understand the traffic here!

The next morning we woke up early to get back on our small day boat and head back up through the karsts back to the pearl farm, where we again got on a larger boat. From there, we motored back to Ha Long City, had lunch on the boat, and then boarded another bus back to Hanoi! We arrived back in Hanoi around 5:30 pm.

Ha Long Bay was beautiful, and well worth the extra money — it's probably the most expensive "tour" we'll do while we're here. We were so glad to have done a 2-night trip, because it was clear that the 1-night trips barely even scratched the surface of the bay. We were able to spend much more time motoring through the karsts, viewing huge floating villages, exploring islands, etc. Technically we also went through Bai Tu Long Bay, which is similar geologically to Ha Long Bay but has more sandy beaches, too. I could have spent a week exploring the bays and still not have done everything I wanted!

If you want the details on our trip, specifically, we went through Christina Cruises. They are, apparently, running a newer tour and therefore were offering a discount. We were on their smaller boat (I think 9 cabins?) for our overnight on the boat, and then stayed at the Sunflower Hotel (which was quite nice!) on Cat Ba Island. All of the guides we had spoke English very well, and we felt incredibly taken care of the whole time. We really enjoyed chatting with our guides and learning more about their families, views on Vietnam, etc. 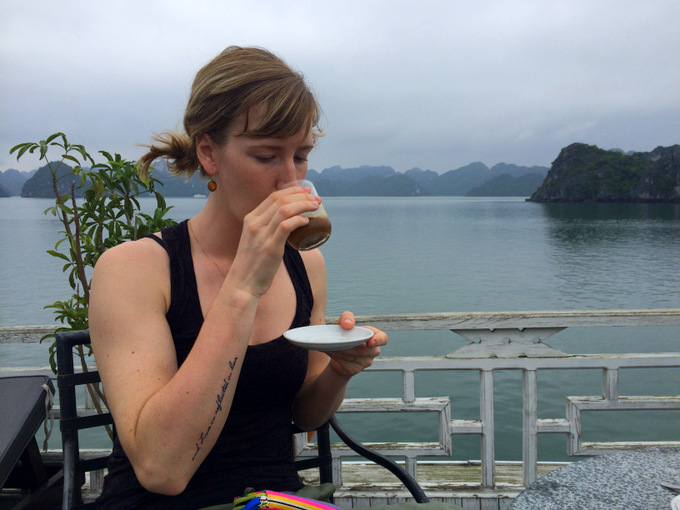 Now we're up North exploring rice paddies and Hmong villages! I thought it'd be cooler up here, but it most certainly is not! 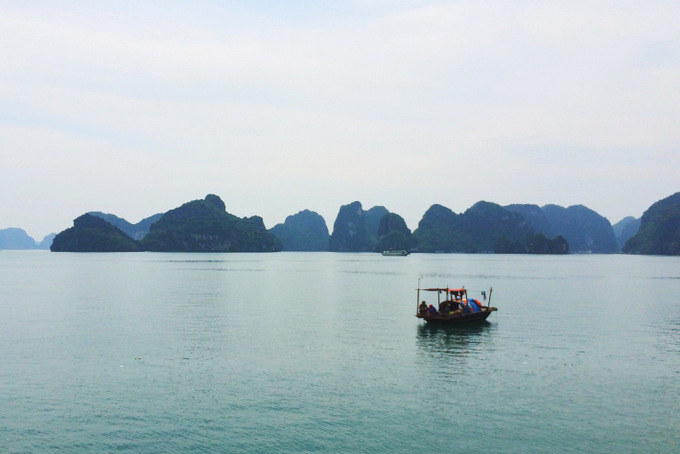