Notice: Function add_theme_support( 'html5' ) was called incorrectly. You need to pass an array of types. Please see Debugging in WordPress for more information. (This message was added in version 3.6.1.) in /var/www/wp-includes/functions.php on line 5831 Lemon Blueberry Cheesecake with Blueberry Curd Recipe 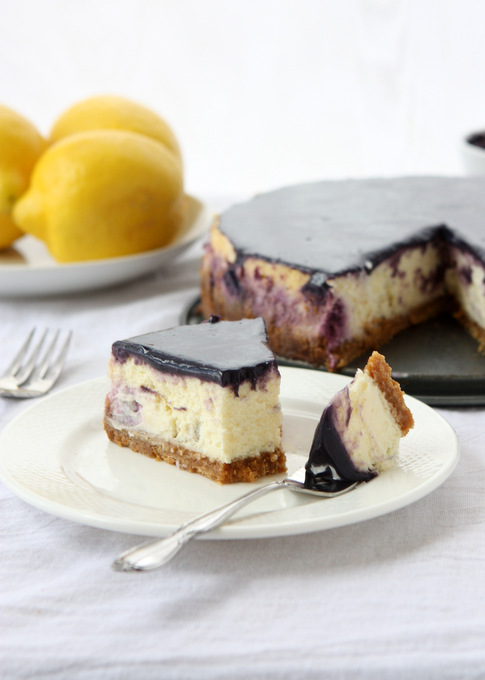 Despite what I accidentally led you to believe yesterday, we are in Laos! Plans {I keep calling them plans and realizing that word is totally inappropriate here} changed again! Gotta throw off our stalkers every once in a while, knowwhatimean? Originally we wanted to take a boat up the Mekong River to Phnom Penh, but for a number of logistical and financial reasons it made more sense to return to Saigon and fly to Laos. So here we are! Laos is, while still very Asian and foreign to us, totally different than Vietnam. In a word: relaxed. I wasn’t aware of a constant tensity in my body while we were in Vietnam, but after a few hours in Laos I noticed I was much more relaxed. We are in Vientiane, which is the capital and the largest city in Laos by far, but it’s so much quieter, calmer, and laid-back than we ever felt in Vietnam. Not to say better, but different and welcome at this point! The entire country has fewer people than Saigon alone! {for those wondering: we successfully sold our motorbikes!} 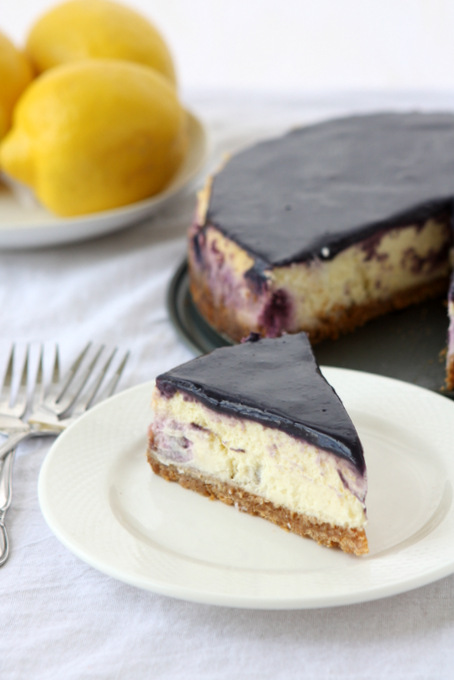 We said goodbye to Saigon and Vietnam this morning, after a final dinner of ban xeo and a good wander through the city last night {followed by a surprisingly restful night despite incessant honking and typical Vietnamese traffic noises}. We took a small plan from SGN to Pakse, where we went through the most hilarious {mostly due to our ignorance} immigration process, before continuing our flight to Vientiane. Already, I am loving the language here! Vietnamese is hard. It just doesn’t sound right to my brain, and my mouth has a hard time not swallowing the wrong sounds! Lao sounds so friendly and inviting! Hello/goodbye is pronounced “sah-bah-dee” — try saying that without smiling and repeating it about ten thousand times. This country is very much a hands-in-prayer kind of place when greeting and departing, which I already love. The people are kind. The food, what little we’ve had so far, is just as amazing {but new and exciting for us!} as in Vietnam. The landscape is again green, lush, and full of rice paddies. In contrast to Vietnam, where rice paddies seem to go forever without a tree in sight, Laos rice paddies often have trees interspersed! At first it looked really funny to me, but it’s actually quite nice! I suspect those that work in the paddies agree with me on that one! 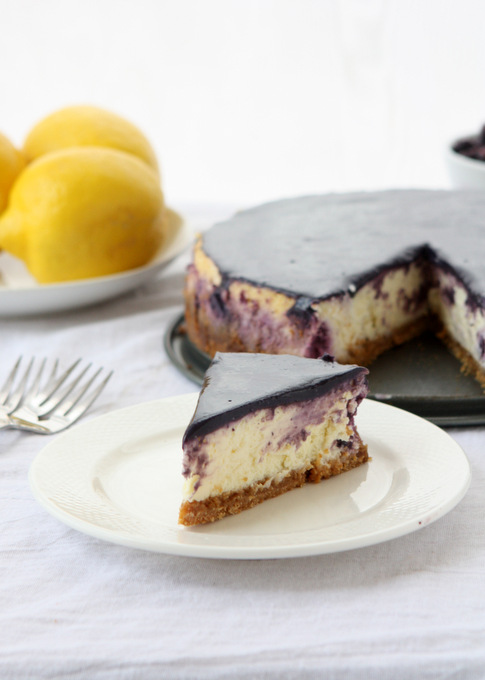 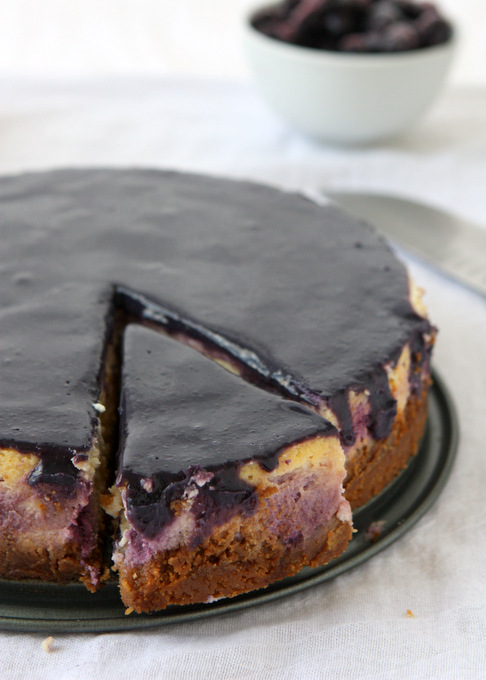 All of you at home, who may be more of a planning nature than we are, should plan to make this cheesecake ASAP! I’ve been holding onto this for a while — it was what Derek requested for his birthday this year. Every year he requests a cheesecake, so we’ve been through a few good ones. We’ve had chocolate, blueberry mango, raspberry swirl, and now: lemon blueberry! The kid likes blueberries, I tell you what. I thought a blueberry curd overtop of the cheesecake would be a fun way to not only make it taste amazing, but also make it pretty! You have to have a pretty cheesecake, right? {WRONG: I’m totally all about ugly cheesecakes! They just have to taste good!} The curd does let you get away with all sorts of cheesecake sins — you never know what’s lurking beneath the blue curd… Dun dun DUN. 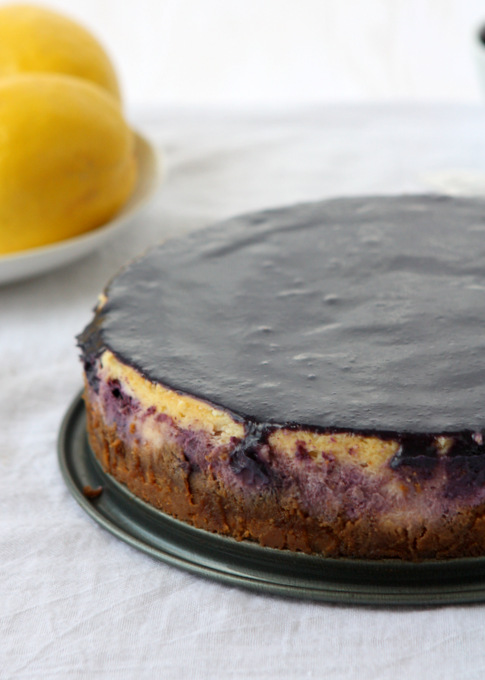 This cheesecake has a typical graham cracker crust, with a bit of lemon zest mixed in there to keep that lemon flavor STRONG! I’m of the belief that if you’re going to have lemon, you better be able to taste it. None of that weak semi-lemony mumbo jumbo. Gimme some CITRUS! The cheesecake itself is also quite lemony, with blueberries mixed in and the curd spread overtop. You will want to bake this a day before you plan to serve it so it can fully chill and the curd can set up on top! If you’re really in a rush, I suppose you could serve the curd on the side… but I’m not condoning that behavior!