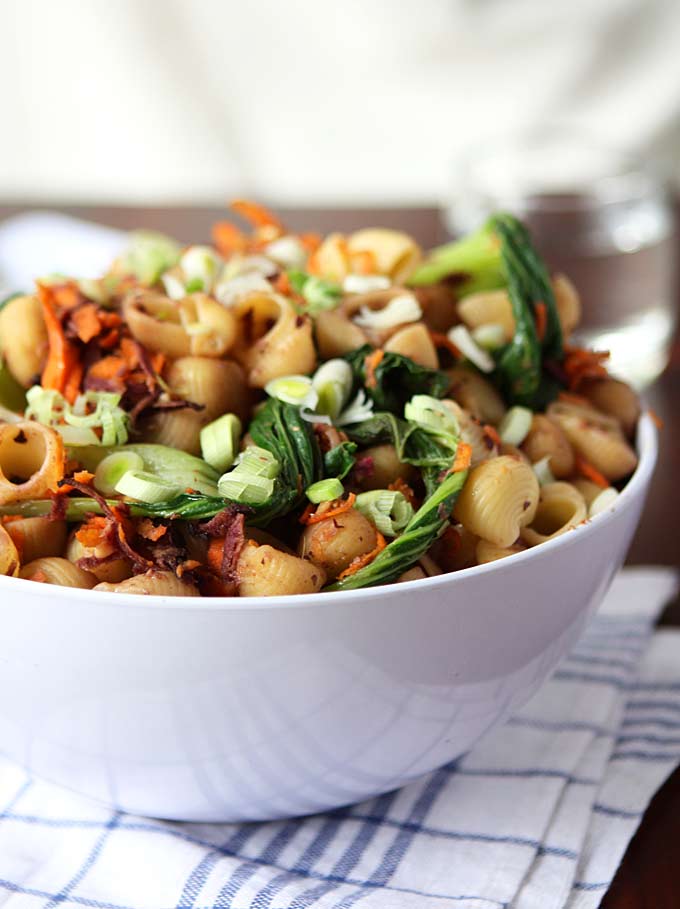 Alrighty. We have three orders of business today! First, let's catch up about the animal situation in our house. This is, obviously, of critical importance. Second, we'll talk about my love of sesame oil. It's a real, thriving, absolute love. More later. Third, let's incorporate item #2 (love of sesame oil) with a quick, easy, veggie-ful pasta dish. It does NOT disappoint!

OK: Animals. As I mentioned last week, we moved to a villa about 100 meters away from our last one in hopes of being further away from the roosters. IT WORKED. Thank goodness! No longer do we have roosters literally two feet from my head acting like they need to wake up the ENTIRE WORLD at 5 am! They're still in the background, since they're now 101 meters away, but I can sleep through it. Occasionally they'll come into our sideyard, which appears to be a favorite trash dump for passersby, but as soon as I stand at the window and flap the drapes they go SCREECHING for safety elsewhere. It's actually incredibly amusing, which I half feel bad about being amused by. But only half bad. It's so darn funny! 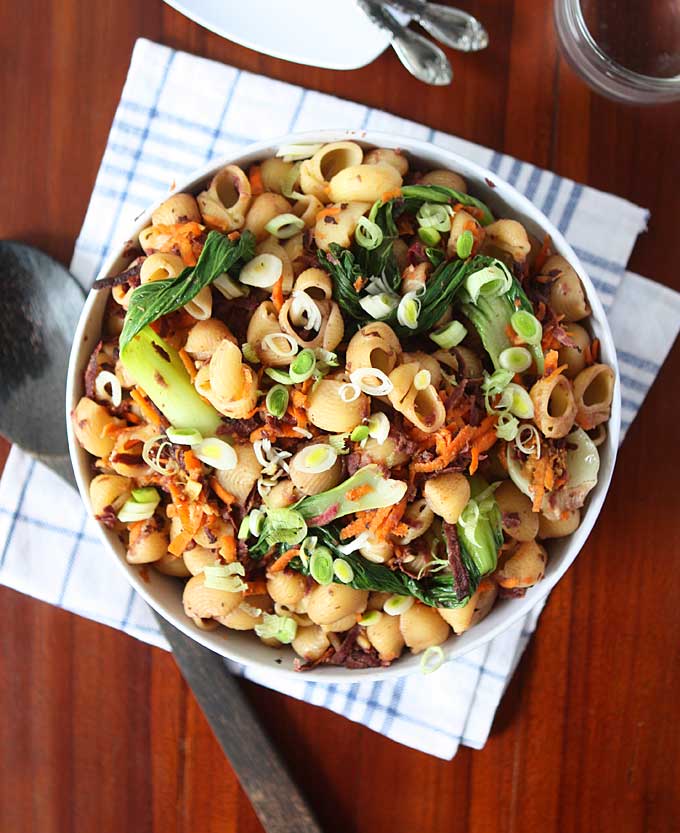 The dogs have quit coming into our yard, partially because we make sure to close the gate, and partially because I think they've just calmed down! I know this sounds crazy, but they were SO OBNOXIOUS around the full moon... and now they're not. I'm not one to say these things are related, but are these things related!? I'll make notes on the next full moon and keep you up to date (lucky you!).

SPIDERS: So far so good in the new house! There were some small ones when we moved in, but I sprayed the heck out of this house with my peppermint oil mixture. I plan to do this frequently, lest it wears off and they spidey-sense their way back into my bed... NOT GONNA HAPPEN! This also seems to be keeping the ants at bay — along with our vigilant "no food anywhere but our bellies" rule. It's harder than you'd think. AND, these ants eat through plastic (?!?!) so NOTHING is safe. The fridge is our new best friend (even for dry goods). 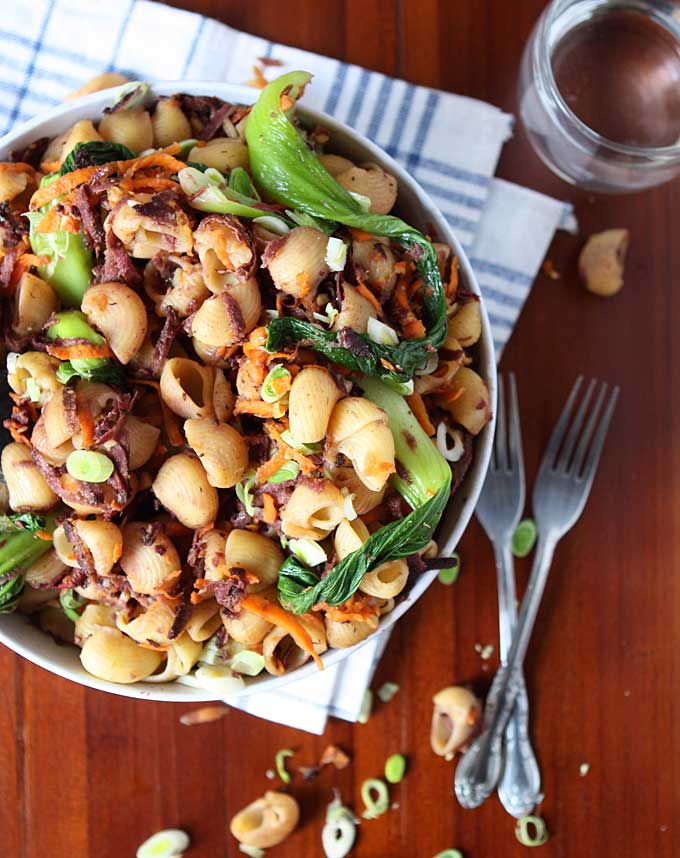 Overall, we're doing pretty well on the animal front. As I type this I even see a butterfly flitting through my window and around the room! This is getting mushy. Let's move onto something less mushy: MY LOVE OF SESAME OIL! 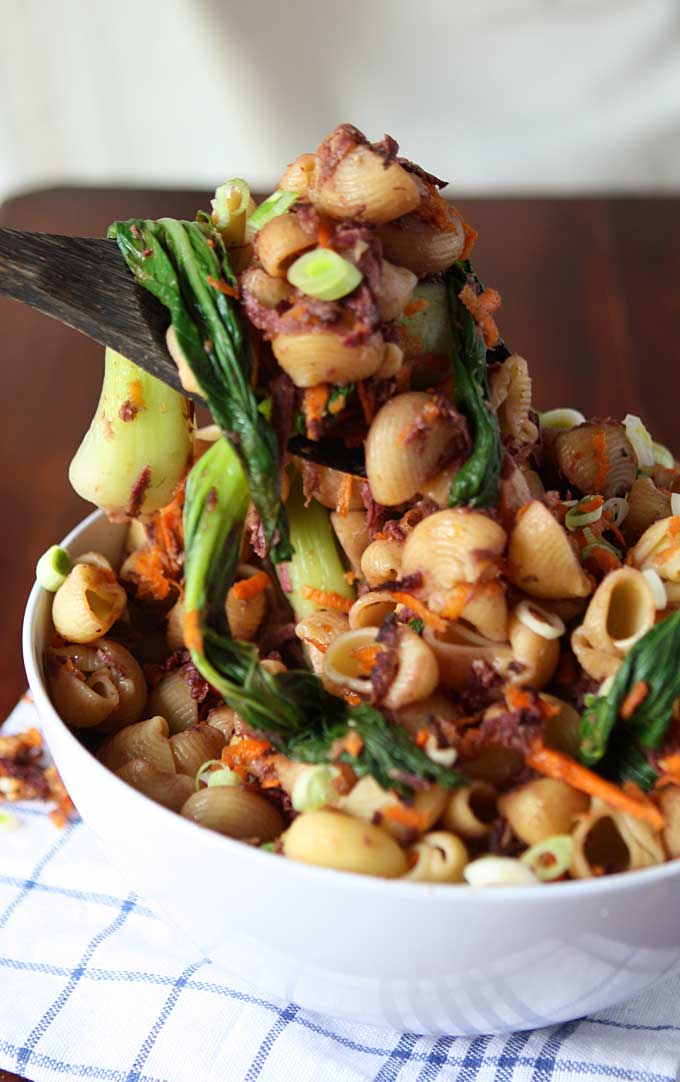 I'm not even kidding when I say it is, hands down, my favorite oil to cook with. Obviously you can't cook everything in it (doughnuts? I think I'll pass.), but as a whole it is absolutely wonderful. THE SMELL!!! If you've never bought a bottle of toasted sesame oil, do yourself a favor and go buy some immediately. Then open it and take a whiff. Better yet, throw some in a hot skillet and take a whiff. Then add some garlic and onions and ginger and goodness and you'll probably just drink it straight. I won't judge.

This pasta came from my love of sesame oil. The sauce is pretty simple, mostly just using the sesame oil for flavor. I added in some goodies, not too far off of the sauce for my cold soba noodles, and called it a day. This dish literally takes less than 15 minutes to cook — and only one pot. Just cook the noodles in a large pot of water, throw in the baby bok choy a few minutes before the pasta is done, then drain, add in grated sweet potatoes and carrots while everything is hot, and toss with the sauce! Voila! EASY. And oh-so-tasty. 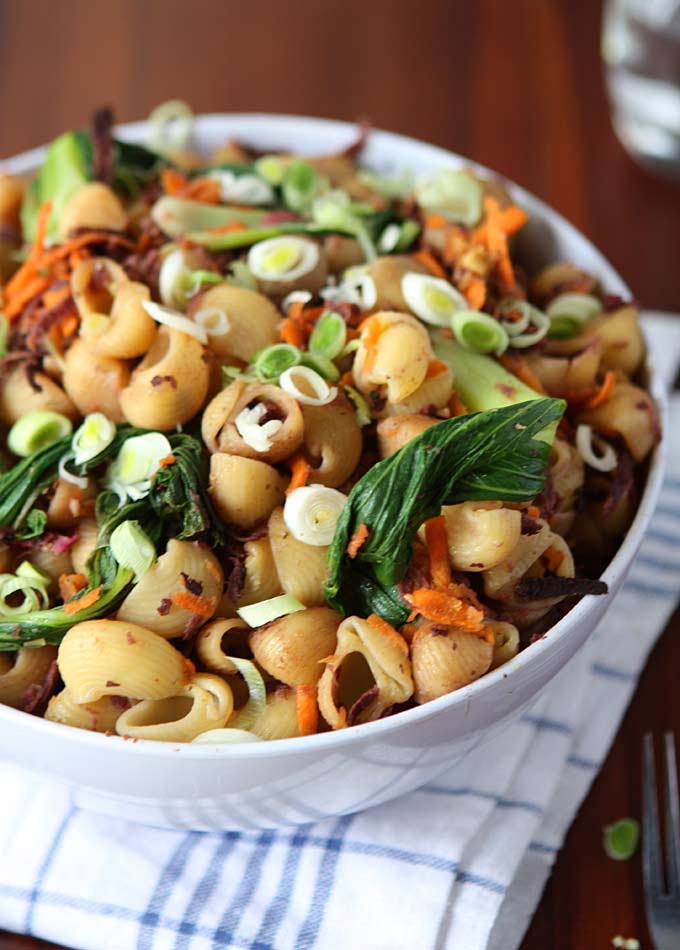 If you want to really go all out, I'd throw in every herb I could find. I only had scallions on hand, but would have loved some cilantro, thai basil, and even mint! There's my Vietnam-loving-self coming out! ENJOY! xo

If you're wondering what the purple in my pictures is — it's the sweet potato! Feel free to use a normal orange one!