Notice: Function add_theme_support( 'html5' ) was called incorrectly. You need to pass an array of types. Please see Debugging in WordPress for more information. (This message was added in version 3.6.1.) in /var/www/wp-includes/functions.php on line 5831 Vegan Ginger Coconut Rice Pudding Recipe 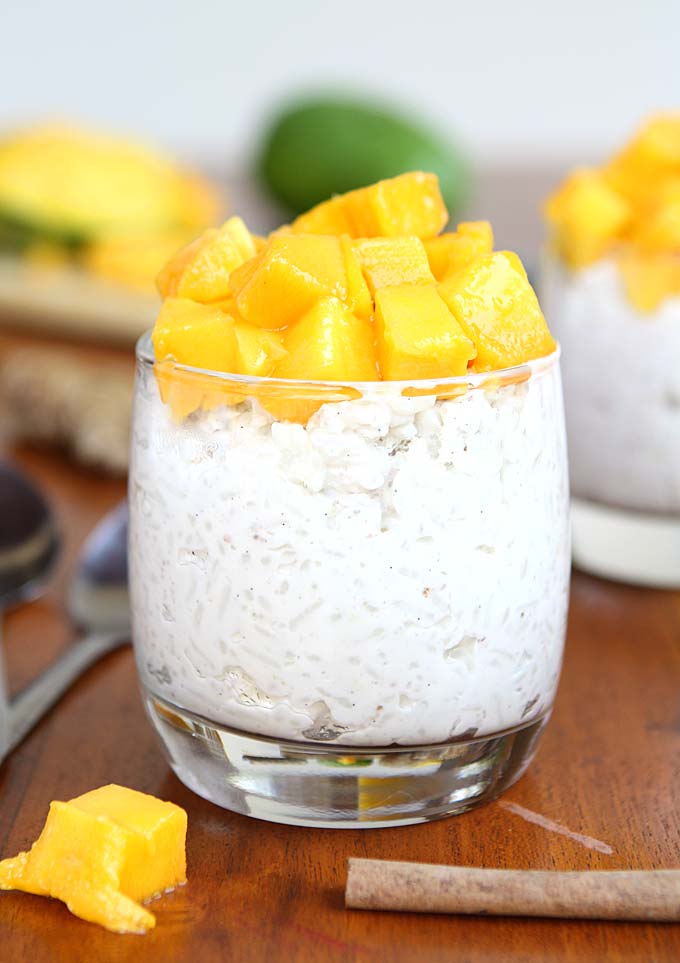 Hey guys! Good moooorning! Sometimes when I start writing posts I get this feeling like I’m peering around into your kitchen as you roll out of bed and put some coffee on. I’m that obnoxious awake one that’s all “wakie wakie, eggs and bakie!!” — it’s a weird feeling to arise simply from writing a few silly paragraphs for you between pictures of ridonkulous yumyums. But here it is! Are you awake!? Did you sleep well!? What are you having for breakfast?! Did you dream about me?? Obviously. That’s a given. Also: this feeling is incredibly ironic since I’m the sleepiest morning human in the world. I take a good long time to get up and at ’em usually, and am most certainly *never* in the mood to socialize in the AM. Sorry ’bout that. We’ll just pretend, via the internet, since it’s actually late afternoon here and I am AWAKE. Mostly. 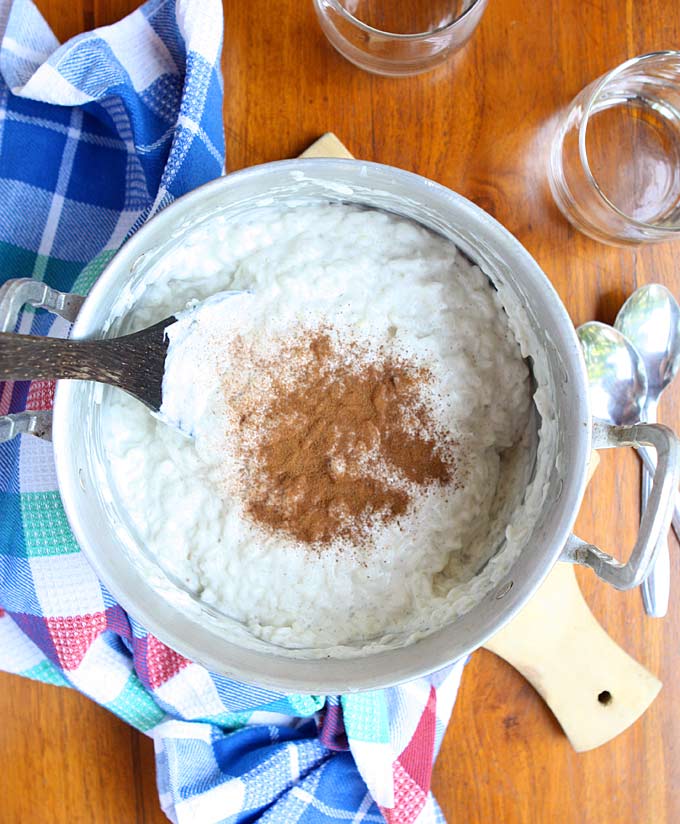 I’m writing to you today from the beautiful island of Nusa Lembongan! Although we’re stationed in Ubud, we’re still going to explore Bali and the surrounding islands — slowly and gradually. Keep an eye on instagram for some delicious beachy pictures and dreamy pool shots. I swear I’m not trying to make you jealous (come JOIN US!!) — just keep you up to date on our lives! We plan to surf, relax, surf, eat, surf, relax, and sleep. Sounds like a plan to me!

As we were sitting at lunch today, gazing out to the clear blue sea with the mountains of Bali rising in the distance, Derek commented on the Bob Marley coming over the radio. He mentioned that he LOVES islands because they always play Bob Marley, etc. And they usually wear bright clothes. And they have delicious food. And you don’t have to wear shoes! As someone who has proclaimed himself a mountain-lover since the day I met him, I’m pretty sure he’s fallen for the beach. The only thing missing is the skiing, which surfing will EASILY replace (in my mind!). You can find us on some remote island for the next 23,394 years. NBD. 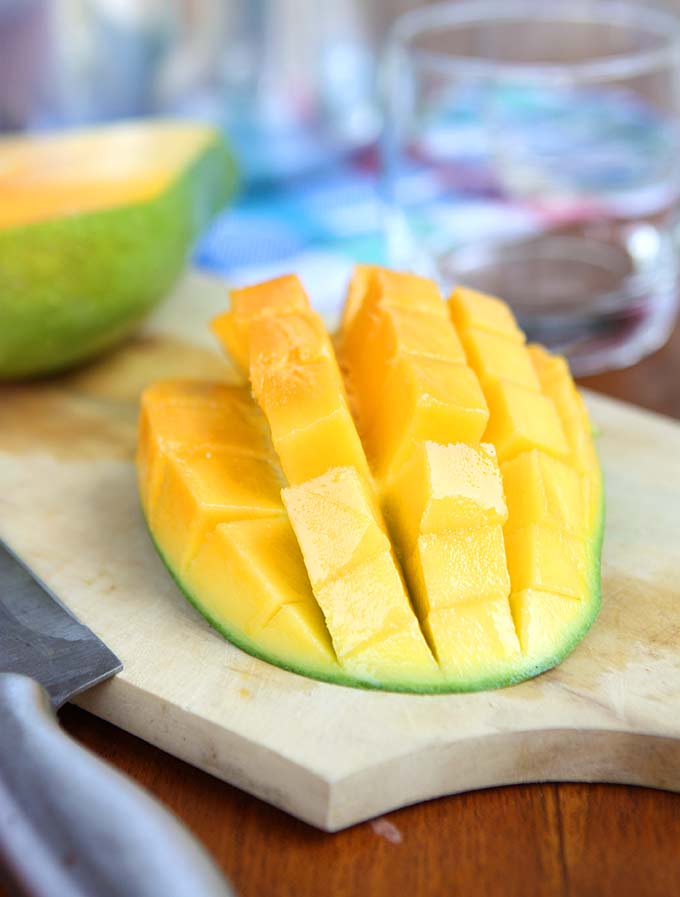 ANOTHER thing he has come to love {and I kid you not he will likely kill me for writing this in stone. AKA the internet} is COCONUT! If you know him at all, you know he “doesn’t like” coconut. Just like he “didn’t like” ginger, or lentils, or mushrooms when we met. What we have here is a classic case of CHANGE O’ TONGUE. That’s like change of heart, only gastronomical. After months of him loving my slow cooker chicken curry, I asked about it — since it’s all coconut milk. It’s been a few years of convincing {mainly after seeing him order coconut curry after coconut curry}, but last week we finally arrived at it: “OK I LIKE COCONUT!” Whoa. Did I hear those words correctly? Did you just say you LIKE coconut? Yeah, yes he did, folks! We have a convert!

So now I’m all LET’S EAT ALL THE COCONUT! since it comes in abundance and is omg amazing over here. Our house is surrounded by real coconut trees. With coconut. AND PAPAYA TREES! That’s for another day. This recipe really wasn’t supposed to be a vegan thing, but the only milk I had was coconut milk (actually coconut cream, which totally whoops coconut milk) and I was really itchin’ for some rice pudding. 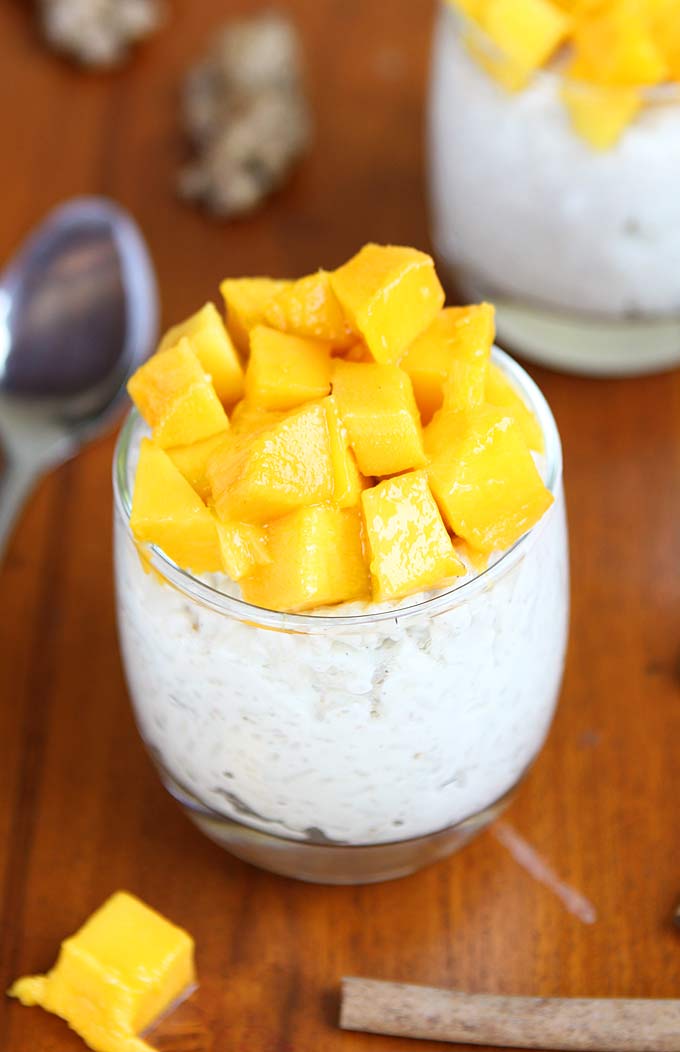 As cooking over here needs to be somewhat simplified, due to lack of dishes/pots/pans/resources, this is a one-pot deal. No scalding milk in a separate pot first. No cooking up eggs and milk into a pudding to thicken it. Just plop it all in — saving some of the milk to add as needed — and let ‘er rip. I’ll go over details for coconut cream/milk in the recipe! ENJOY! (ALSO: top with whatever you want! I had mango mango mango, but if you want passionfruit, strawberries, kiwi, etc. do what you feel like!)

If you are using canned coconut milk, as found in the USA, you may not need to use any water — just use straight coconut milk. The coconut CREAM I refer to comes in a carton and is very thick, and therefore I diluted it somewhat. Use your judgement here, but don’t dilute whatever you’re using TOO much or you’ll lose the coconut taste! If you run out of coconut and need more liquid to fully cook the rice, just add water.