Thank you guys for all the love and support on these travel posts! I've been nervous about posting them, but you've responded enthusiastically and I'm so glad to hear that you're enjoying following along! With that, here's another! 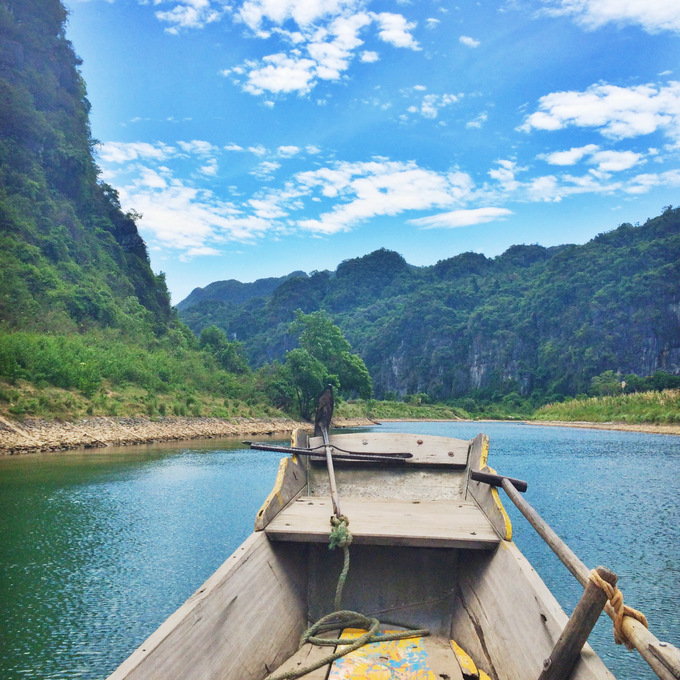 After spending ten days up North in Sapa and Bac Ha we took the day train back to Hanoi for one night, then flying out the next morning down to Dong Hoi. This was a hard decision — we really wanted to go to Ninh Binh (it looks AMAZING) but decided to skip that chunk of the country for now. Derek was eager to get to the caves! About the train: the day train is drastically different than the night train (you're not in sleepers). Make sure you pay for the air conditioned car, otherwise you'll be sweating to death the entire time. I'm glad we took the day train because it enabled us to see so much of the country as we went by! I'm still in awe of how green and lush it is, so I had a great time observing the scenery. It's a long trip, about 11 hours, but bring a book and you'll be fine! 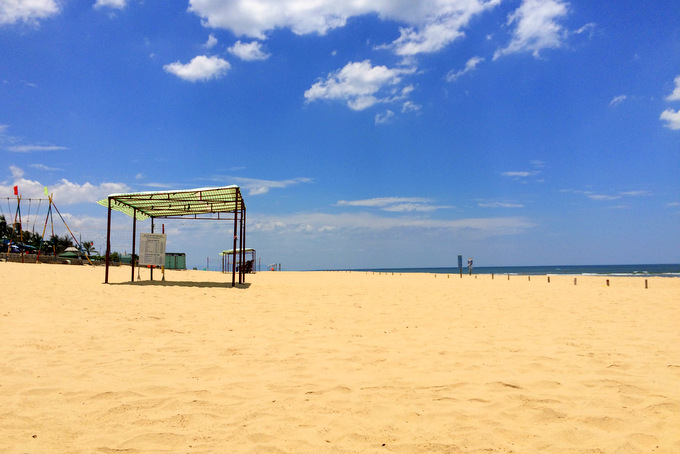 Arriving in Dong Hoi was a slap in the face: SO HOT. We immediately realized that we'd had it easy in Hanoi and further North. We were only in Dong Hoi as a hub to get to Phong Nha National Park, but had to wait six hours for the bus — so we went to the beach! The beach was deserted. Nobody was there but us! We spent time alternating between lounging in {warm} water, practicing handstands on the sand, and hiding out in the shade. We're still too white to be in the sun for that long! Hopefully that will change soon…

After mistakenly eating breakfast rice porridge for lunch {we just ordered what we hadn't tried yet!}, we got on the public bus and headed to Son Trach Village, a small one-street town that serves as the entrance to Phong Nha Ke-Bang National Park. We found a hotel, tried to bask in the air conditioning for a while, then got some street food for dinner. The town doesn't offer all the much, but is clearly set up for groups of tourists needing food and a place to sleep. The surrounding area really is beautiful, with huge limestone karats just like Ha Long Bay, only on land! 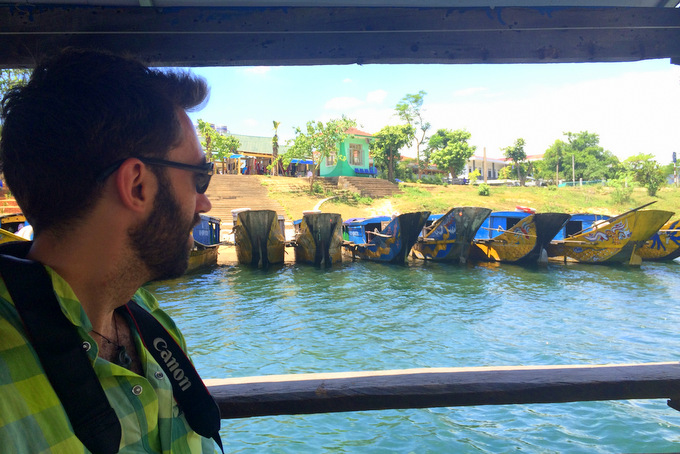 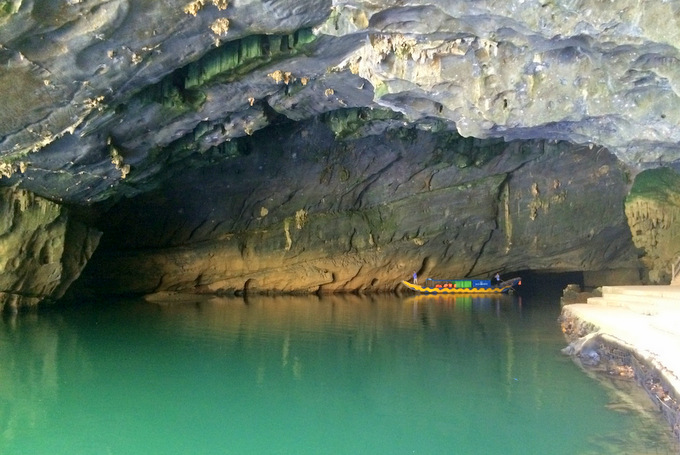 After a very loud night in the hotel, we hired a boat and made our way to the caves! The main cave, Phong Nha Cave, is really massive! You motor up the river to the mouth of the cave, then they turn off the engine and push (like in Venice!) with long bamboo poles. It's pretty remarkable! It's also full of other boats and tourists. Outside of the entrance to Phong Nha Cave is a little tourist trap en route to the stairs up to another cave, which we hiked up to {oof} and explored on foot. It was really nice to get out of the hot sun and into the cool, dark caves! I'm pretty caved-out — we've seen quite a few and they've really all look the same. 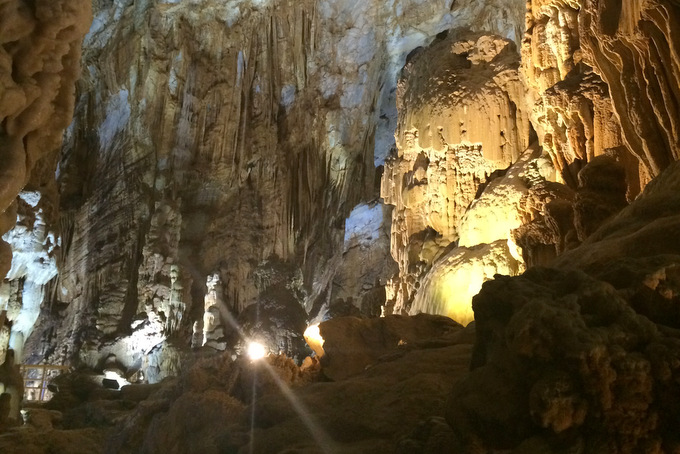 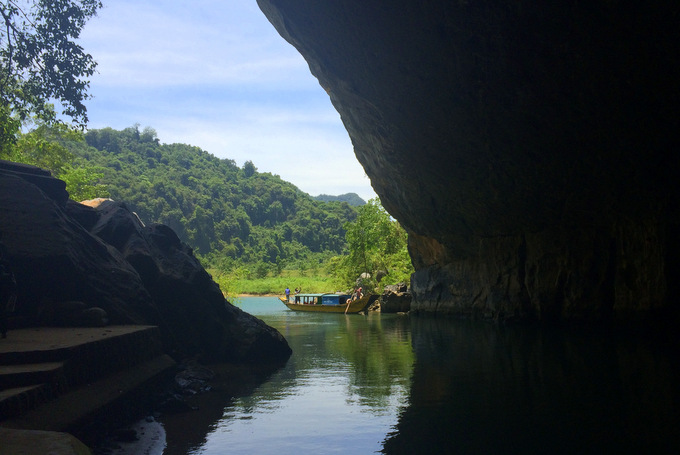 By the time we made it back to town it was mid afternoon, so we grabbed lunch and headed back to our room for some AC and rest. Something about that amount of heat really tires you out! We also spent some time trying to figure out a way OUT of Son Trach the next day — not exactly an easy task. I couldn't find any information on busses out of the village on the internet or in our guidebook, and nobody in town was really interested in helping us if we didn't want to pay for the expensive tourist bus at 5 am. Finally we learned the public bus leaves at 7 am, which seems like information that should have been readily available. Oh well! It might have been fun to see more of the national park, but we were too darn hot and really weren't impressed with Son Trach village as a place to stay. The people were decidedly less friendly than we've encountered elsewhere, the food was all overpriced, and our hotel was ridiculously loud. Time to move on!

We spent most of that next day, after successfully flagging down the 7 am bus, en route to Hue. We had heard mixed reviews of Hue, mostly siding on the "Spend only one night" side of things. We got there and immediately loved it! It was clean and beautiful, the people were SO friendly, the food was fabulous, and we LOVED our hotel. We stayed at Phong Nha Hotel, for $8 per night, and couldn't have been happier. The staff were really eager to help us with anything, from figuring out motorbike prices, refilling our SIM cards, finding good local food, and much much more. Highly recommended!

In Hue we spent quite a bit of time figuring out the motorbike situation, and successfully buying two scooters! It was so nice to have those scooters while we were in Hue, so that we could go to the various attractions without hiring a taxi/moto. We spent an afternoon walking around the Citadel, learning about the Emperors and seeing what remains of the royal city. It's pretty impressive to see the detail in the buildings, and we were surprised at how recently they were built — in the 1800's! I was expecting something much older! Much of the Royal City was destroyed in the war, but those parts were equally interesting to see. There are many open fields with rubble, clearly having been home to a building before being bombed. 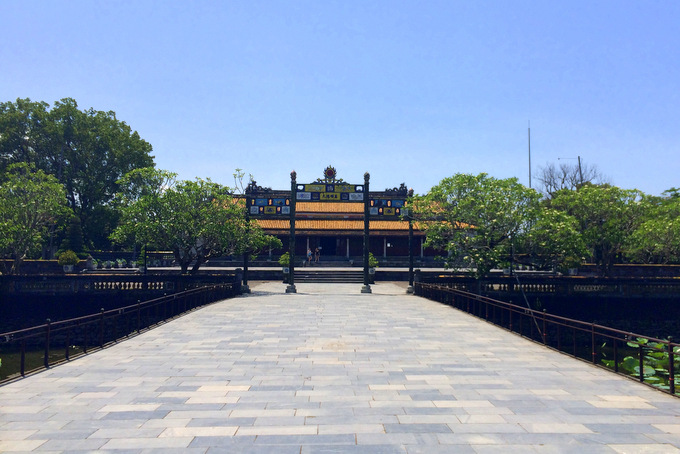 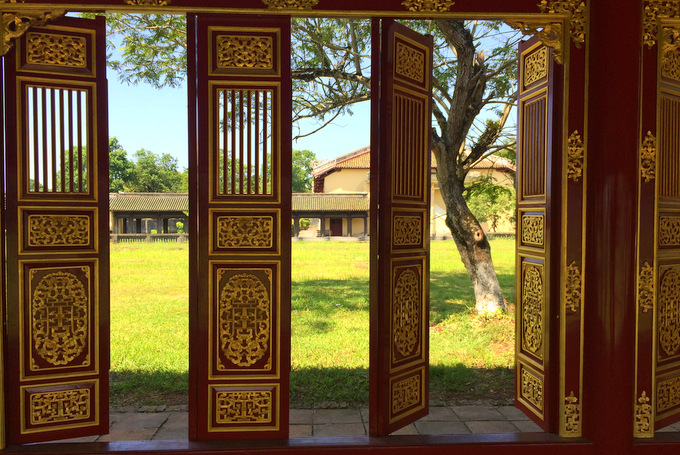 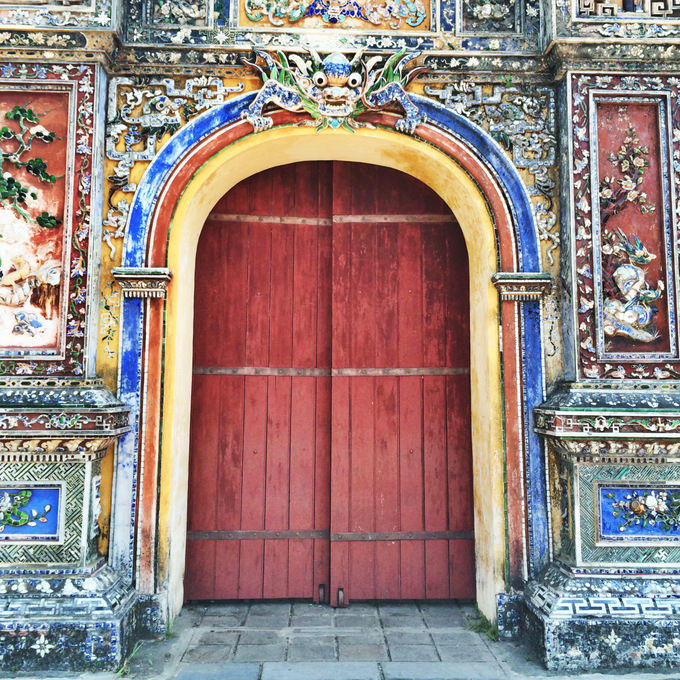 One reason we were glad to have a motorbike was to drive a bit South of the city to the Blind Institute, where they give $3 massages! It was a totally different experience — not like getting a massage at a spa, but much more rough around the edges. Derek wrote about the experience, which really was pretty fascinating. 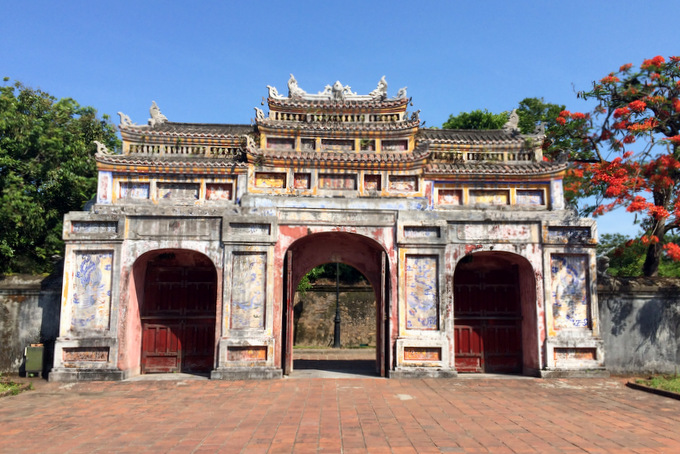 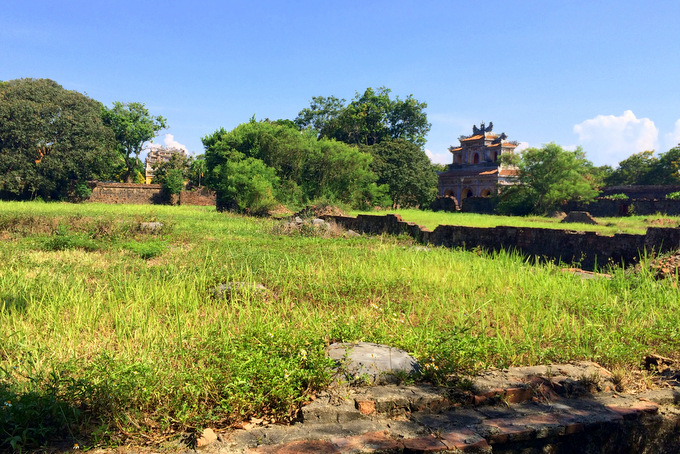 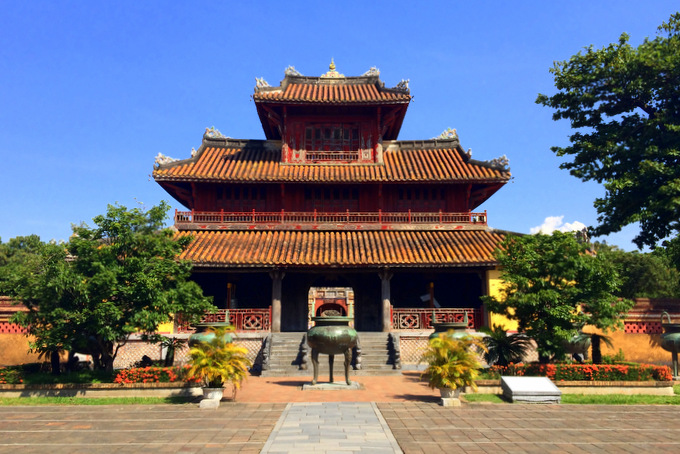 We also took a day to motor out to a few of the Emperors tombs. I was skeptical before seeing them, but they are truly magnificent! I highly recommend anyone in Hue take the time to see the tombs (preferably on your own). They're a bit of a drive from town, and spaced out in the countryside, but well worth the effort. These, too, are fairly "new" to the world — build in the last 200 years. Our guidebook says that they're essentially the fruits of many years of boredom, once the Emperors were basically just figureheads they had nothing to do but plan and execute the building of their tombs! It was, again, remarkably hot (111 heat index), so we only went to two before calling it quits. It would have been fun to stay another day and see a few more! We say Khai Dinh and Tu Duc's tombs. Tu Duc used his as more of a country retreat, so there were beautiful grounds and a lake, temples, etc. in addition to the tomb itself. I could have lived there, for sure! Khai Dinh's was completely different: All cement, relatively small, and without any purpose other than housing his tomb! Everything has a million stairs, and my out-of-shape self was exhausted after climbing so many stairs in the heat! Whew!

Overall, I could have spent many days in Hue. The food really was exceptional, the best we've had so far, and REALLY cheap. Like, $1.50 for a fabulous dinner. We also have started seeing a bit more variety in the food — more herbs and greens, and a few things I've yet to identify wrapped in banana leaves. It's all delicious! Walking around Hue was great, too — there are plenty of stores to get distracted by, and the Perfume River flows right through town and has lovely parks to walk through on either side. The market is incredible, too! We went for a few things — helmets, bungee cords, rain ponchos (for our motos) — and had a great time bargaining. I usually hate bargaining, but have begun to feel quite successful without also feeling like a total jerk. My key is the "act disinterested and walk away to "think about it" and they immediately don't want you to go to their competitor, so they keep lowering the price. I got my helmet for less than ½ of what she originally quoted! Score! {For all I know, locals get it for ¼ price, so maybe I shouldn't actually feel good about this!}

Now that we have our FREEDOM! we've motored down a bit further South, and have some more {potential} changes brewing… You'll probably hear it first on Instagram! xoxo 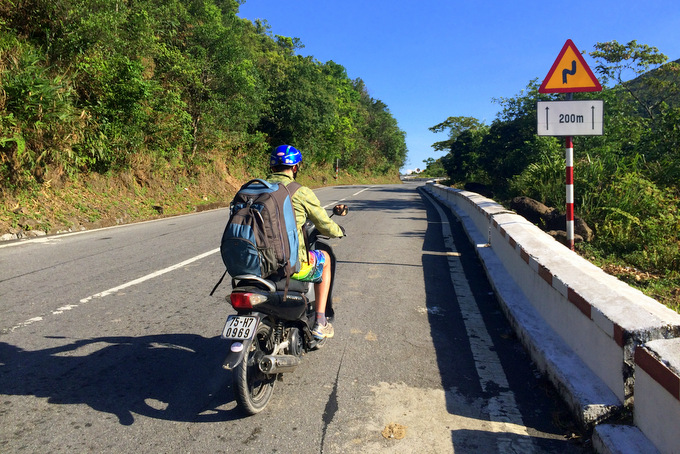