Thank you all so much for the great response to my first video!! If you missed it, you can find it on The Kitchen Paper YouTube Channel! xoxo

Remember a few months ago when I pretty much wrote a love letter to Indian food and made extreme claims of a life changing recipe? I WASN’T KIDDING. And, based on the crazy traffic and high level of comments on that post: I wasn’t the only one. I was so so so glad to hear that other people made that recipe (Indian Butter Chicken) and loved is just as much as I did! I still make it and love avtomaty na dengi! And … I realize how much cream goes into it and that *maybe* it’s not a sustainable thing to eat 10x per week. Um, run more? OR: make this version.

I did some googling and found various “lighter” butter chicken (or tikka masala) recipes, but most of them still had quite a bit of cream. And butter. And I questioned how “healthier” or “lighter” was applicable at. all. for their recipes. SO, I made this one with a few criteria: NO butter. NO cream. STILL TONS O’ FLAVOR! Did I succeed? HECK YES. Um, this probably can’t really be called “butter chicken” though, because there is no butter. SO… oops? 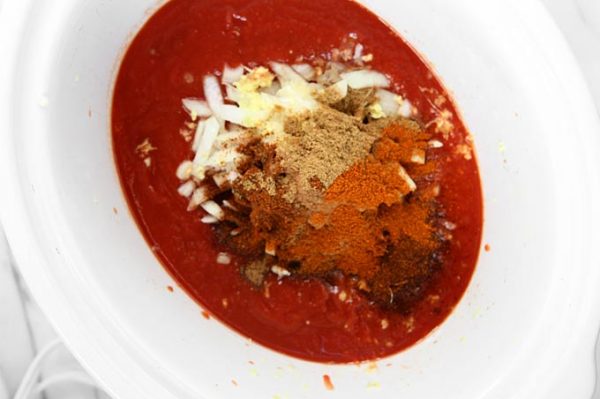 I won’t lie to you and say it’s the same as the original. There’s just no way to replace 2 cups of cream and many tablespoons of butter. That’s life. BUT: it’s still creamy (thanks, Greek yogurt!), flavorful, uh-mazing — and, it’s really easy. The crock pot does all the work for you. Which brings me to my second set of priorities: SLOW COOKER EASE. If something is a slow cooker recipe, I expect to not have to do any extra frying/dish dirtying/cooking. I want to throw it in the crock pot and move on. If I’m going to spend 20 minutes cooking over the stove, I might as well just cook the regular dish. Amiright? Yeah. So. No fussing around here! JUST THROW IT IN! (Admittedly, recipe where you brown the meat first will OF COURSE have a more complex final flavor, but when I want to cook in a slow cooker I’m willing to give that up. If you want to brown your meat, go for it!). 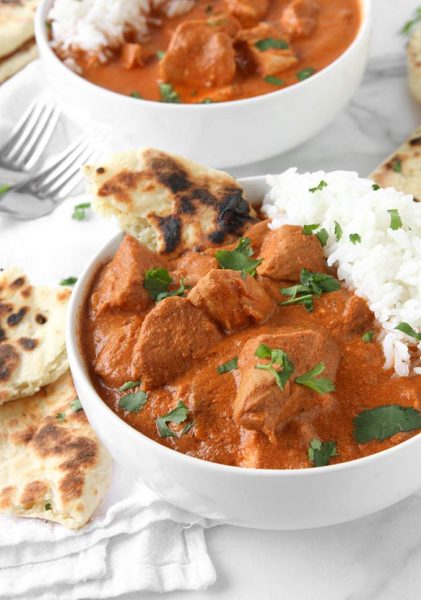 OK. Back to the chicken. You guys know I love Indian food. It’s just so freaking flavorful! I took that original recipe and basically just cut out the cream and butter, and replaced it with nonfat Greek yogurt, which is mixed in (carefully) at the end. If you just dump it in and mix, it’ll probably curdle — which isn’t very attractive — so I suggest taking some of the warm sauce and gradually adding it into the cold yogurt. This will bring the temperature of the yogurt up, slowly, and you can then add it to the crockpot to heat fully without curdling. IF yours does curdle, take all the chicken out, blend up the sauce, and put it all back in. It might be weird, but it’ll solve the texture problem if you experience the dreaded curdle. Moral of this story: SLOWLY add the hot to the cold and mix away!

I’ll be sharing a REAL naan recipe with you on Wednesday to go with this! In the meantime, you’ll have to live with the quick yeastless naan — way easier, but let me tell you: the “real” naan will BLOW. YOU. AWAY. No joke.

Have a wonderful week!

This take on an Indian favorite comes together with just 10 minutes of prep, and is beyond flavorful! Healthy Slow Cooker Indian Butter Chicken Recipe!